I came across this great little jazz LP recorded on the Colorado local label – Stylist.  The cover was very interesting and that coupled with the Denver label based address peaked my interest.  The liner notes didn’t do much in the way of establishing any Denver local connections – If I were a jazz buff I probably wouldn’t have needed to look further.  One track “Tremont Place” was about as close of a local connection as I could establish.

But good old Wikipedia came to the rescue!

The liner notes exclaim that “Hucko is recognized as one of the most gifted jazz clarinetists of all time”. And indeed he is.  Probably his first acquaintance with Colorado came through performing with the Glen Miller Band during WWII and after.  Peanuts (birth name Michael Andrew) also played with Benny Goodman, Louis Armstrong and others.  By the mid 1960’s he landed in Denver performing first on ” Dick Gibson’s Colorado jazz parties where he appeared with the Ten Greats of Jazz”.  Then it would open his own night club in Denver – The Navarre.  You can read the rest on Wiki P.

But then I took a look at his backing musicians on this LP:  Earl Palmer on drums – long time “member” of the super studio group “The Wrecking Crew” out on the West Coast.  Other members included Hal Blaine, Leon Russell and Glen Campbell (as a premier guitarist).  Palmer is in the Rock and Roll Hall of Fame.  Another Wrecking Crew member on this LP is guitarist Barney Kessel.  Over the years he was recognized multiple times as America’s number one jazz guitarist.

Bass player extraordinaire Arnold Fishkind is here who played with Bunny Berigan, Jack Teagarden, Les Brown, Charlie Barnet, and others.  The record is rounded out by two piano players, Pete Jolly and Larry Muhoberac.  Jolly composed TV music themes and worked with Red Norvo, Buddy DeFranco and others.  Muhoberac anchored the TCB Band which backed Elvis Presley on sessions staring in the late 1960’s.  He played with Woody Herman – and worked with many singing stars including Tina Turner, Ray Charles, Tanya Tuckerm=, Neil Diamond and the list goes on.

Peanuts passed away in 2003 in Fort Worth, Texas 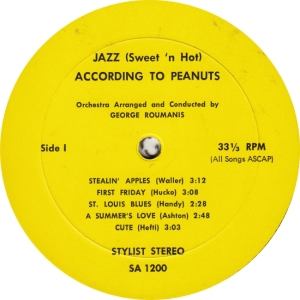 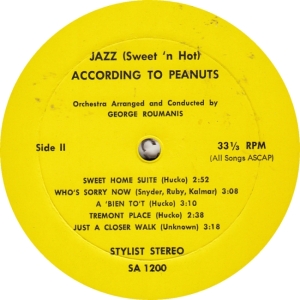