Here are three rather obscure groups when barely dented the Pop Charts – Each has just been added to our “Checkin’ The Charts” page – (an ever-growing illustrated list of Chart Advertisements from the 1950’s and 1960’s).  The Gents were from Provo Utah and “I Wonder Why” was their only brush with national fame reaching number 147  in November of 1967.  The Gemini’s were and R&B Girl Group signed to RCA Victor – releasing three or more singles for that label – none of which made even a dent on any charts.  The Gadabouts were from Chicago.  Their version of “Stranded in the Jungle” was their only chart appearance (#39 Hot 100 in 1956).  The song did much better by competing R&B groups The Cadets from the West Coast (#15 Hot 100/#4 R&B Charts).  The Cadets also recorded as the Jacks.  The third version in 1956 was recorded by another West Coast group – The Jayhawks (#9 R&B Charts/#18 Hot 100).  This group recorded as the Vibrations and also as The Marathons (“Peanut Butter”). 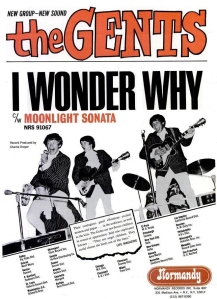 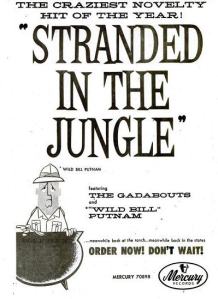