(Note: Paul Whiteman was born Paul Samuel Whiteman on March 28th, 1890 in Denver, Colorado. Whiteman attended East High School as well as other Denver high schools (some say as many as five) including Denver West High School,due to his rambunctious ways and frequent suspensions.  His first instrument as a boy was the violin.  At the early age of 16 Whiteman was a short-term member of the Denver Symphony.  He left Denver in the spring of 1914 where he joined Max Bendix’s Exposition Orchestra playing both violin and viola.  He would next join the San Francisco Symphony and also played with the Minetti String Quartet.  During World War I Whiteman  conducted the U.S. Navy band, the Mare Island Naval Training Camp Symphony Orchestra.  After the war he formed his own “Paul Whiteman Orchestra”.  By 1922 Whiteman’s popularity soared and he was earning a staggering sum of around one million dollars a year!)

In the spring of 1929 Paul Whiteman was interviewed by Radio Digest Magazine.  Reflecting on a burgeoning musical form – jazz – he stated, “Jazz is what we are as we go about day to day; it is our life expressed in musical terms.”

He further related that jazz in many ways was a way of bringing the music of “the masters” (think the classical composers) to the masses.  Whiteman has been challenged through the years by critics as not being a purveyor of ‘genuine’ jazz.

But defenders point out that Whiteman was genuinely interested in and an early practitioner of the form – and that while performing in an era of stringent racial segregation in music (as in all areas of life in America) he often worked with black musicians.

He offered, “When it is all over I want to know more about what the American public likes than anyone else has ever known before.”  Whiteman believed strongly about interpreting the classics into a rhythmic jazz form.

He summarized, “I do believe the radio public is willing to receive jazz with an unprejudiced mind.”  By the 1920’s, America’s media was calling Whiteman “The King of Jazz”.

From Classical to Jazz

Whiteman’s musical background was firmly classical music and his initial exposure was – as stated above – with symphony orchestras.  So how did he evolve into the world of jazz?  In a November, 1929 article – again appearing in Radio Digest magazine,

Seems that Paul – while in San Francisco – had fallen into a period of depression that he just couldn’t shake.  An acquaintance of his steered him into a Barbary Coast jazz venue (which was alluded to as a “hell hole”).  Paul relates what happened next:  “”Here it was that jazz and I met for the very first time, and I, at least, have since never been the same!” 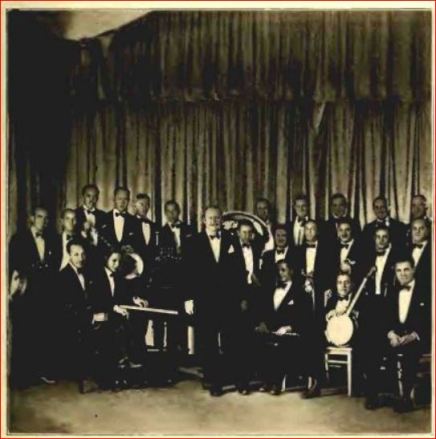 He continued “Jazz bowled me over the moment I heard its screeching notes which seemed to strike at me from out of the not too pleasantly aromatic haze of a beer dive back room where men and women seemed to be contorting themselves in a queer gyration that stressed the mad house blare beat of the music.”

“….I wanted to shout, with the ecstasy of the spiritual release from all oppression that I felt, and so I did it.  No one heard me.  They were all doing the very same thing because they felt the very same way!  Hurrah for JAZZ!”

Whiteman was on his way to a new way of life.  And soon he would be freed from the fiscal restrictions of being a symphony performer.

Whiteman acknowledges the many critics that he faced and would continue to face summing up “To my caustic critics, the the preachers, the pedagogues, to all others I have since, and more than once, pointed out that for me jazz was nothing short of a moral agent.  Yes, of course they laughed at the idea, but that was their mistake…”

By 1931, Whiteman was being referred to as “The King of Jazz” and was appearing on a weekly NBC radio program which was extremely popular with his fans.

The Rhapsody of Whiteman

In 1924 – the always versatile and diverse Paul Whiteman commissioned composer George Gershwin.  A true American standard, Rhapsody made its debut on February 12th, 1924 with a presentation by Whiteman and orchestra performing in New York City at Aeolian Hall – constructed in 1912 the by Aeolian Piano Company.  Gershwin participated in the concert playing piano.  The number would establish George Gershwin and set the stage for a marvelous composing career.

George and Paul (no Ringo or John)

The song didn’t lend itself to recording on the 78 rpm format due to it’s length which approached 18 minutes.  A 1945 version by Oscar Levant managed to chart on the Cash Box charts reaching number 23.  A jazz-rock version was released in 1973 by Eumir Deodato reaching number 41 on the Billboard charts.  The piece was originally referred to as a “jazz concerto” before becoming “Rhapsody in Blue”.  Analysis of the composition is complex and far-ranging but there was no doubt that jazz was the impetus for the number.

In 1932 the Whiteman Orchestra participated in an NBC bold first time radio experiment in which musicians performing over 1,000 miles apart were synchronized – the result being vocalist Bebe Daniels singing in Hollywood backed by the Whiteman Orchestra who were in Illinois.  Radio Doings Magazine stated, “Without missing a single note or losing the rhythm, Miss Daniels sang to Whiteman’s music as perfectly as if they had been in the same room.” 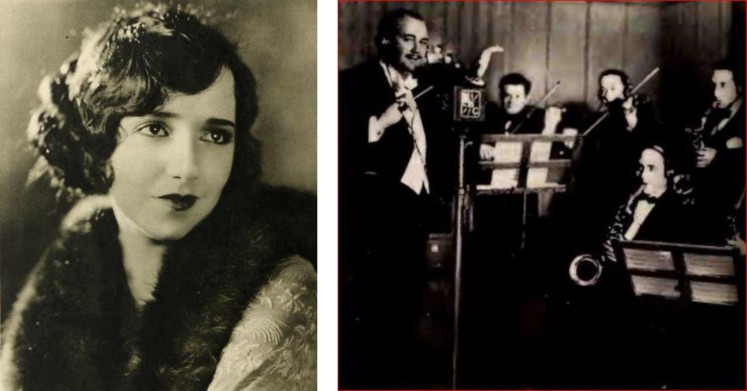 Paul gave an interview in late 1933 with Radio Stars Magazine explaining how tedious his daily routine was – a routine which included constant touring, often performing three times daily, delivering a weekly radio broadcast, making special guest appearances – with much more crammed in – and all on about 5 hours of sleep per night.  He recognized radio as a means of promoting and enlarging his audiences at live performances.

In the summer of 1931, Paul Whiteman tied the knot with the attractive motion picture actress – with the ceremony back in Paul’s home town of Denver.  Margaret was interviewed by Radio Stars Magazine.  She related how a condition of Paul’s marriage proposal was an edict for the 300 pound-plus Whiteman to trim down.  And trim down he did – losing more than 100 pounds!  The article also relates how – before departing for the West Coast – Whiteman held down a job in Denver as a taxi driver.

It was revealed that in 1932 Whiteman earned over $150,000 from broadcasting and an additional $250,000 to $300,000 from his appearances and recordings.  The couple were unable to have children of their own and so they adopted four. 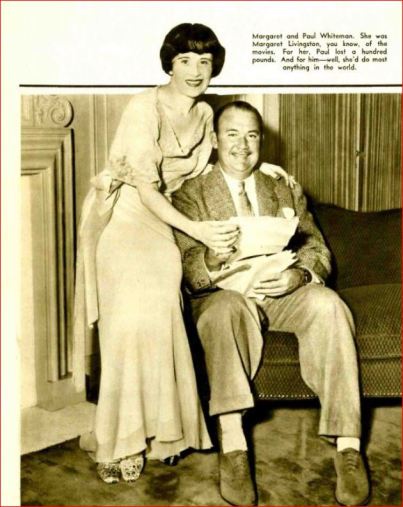 Paul Whiteman ranks right near the top as a successful recording artist ranking in the “Top Ten” artists of all-time.  That listing also includes Coloradoan’s Glenn Miller and Billy Murray. 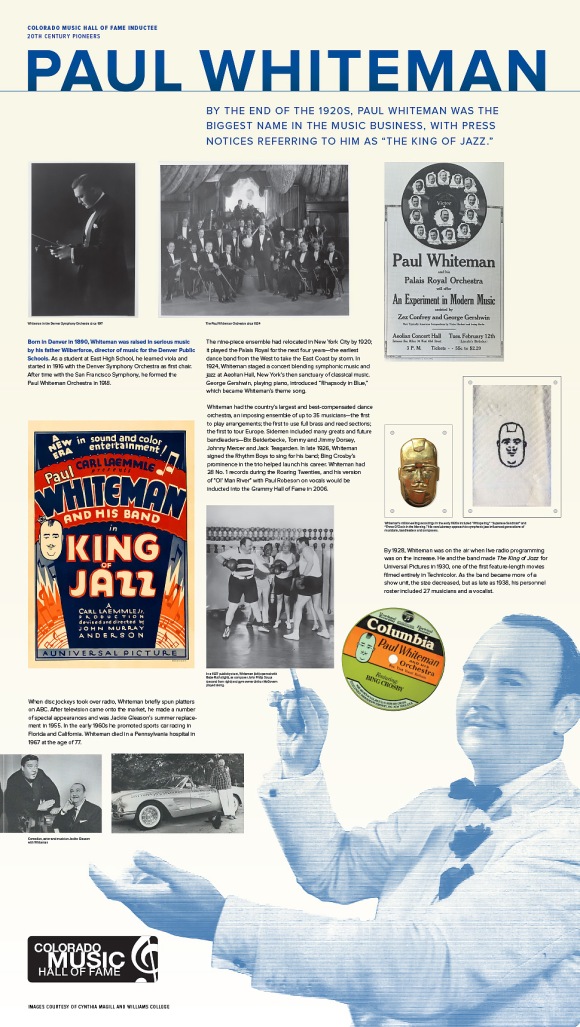 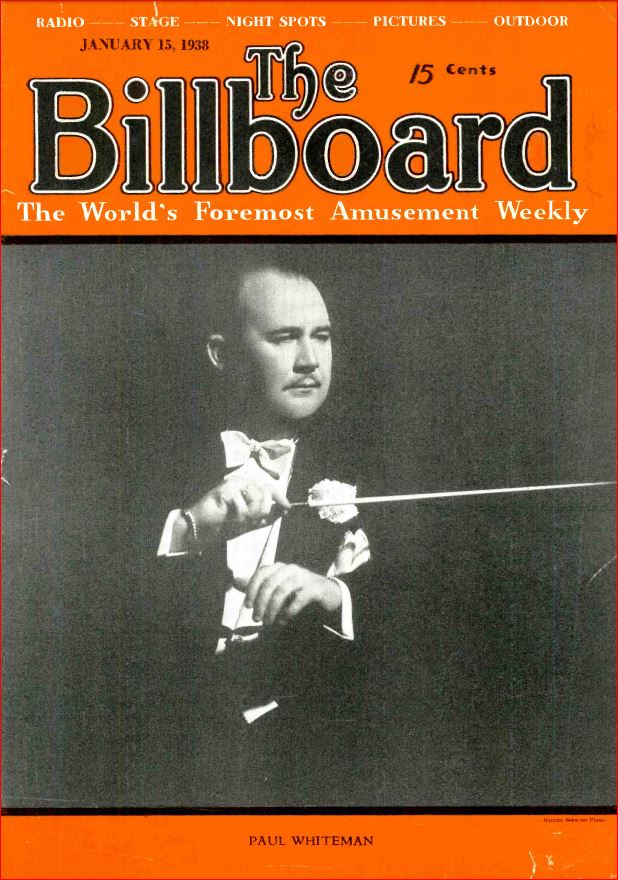 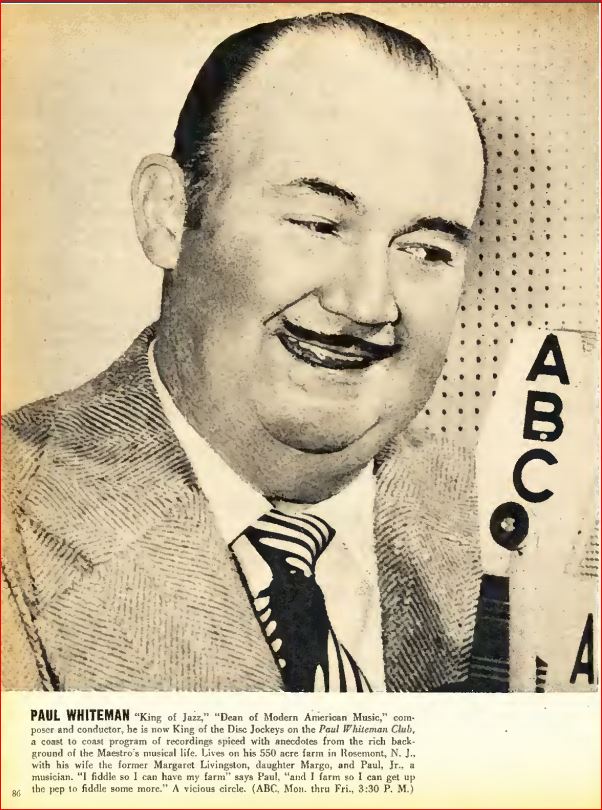 Many musicians of note passed through the Whiteman band/orchestra over the years.  He had an excellent eye and ear for talent and was constantly on the lookout for new promising musicians.

Paul Whiteman enjoyed 209 charting records from 1920 through 1940 – with 30 records obtaining the number 1 position.  He recorded primarily on Victor Records but also Columbia and Decca – as well for a short time on Capitol Records. 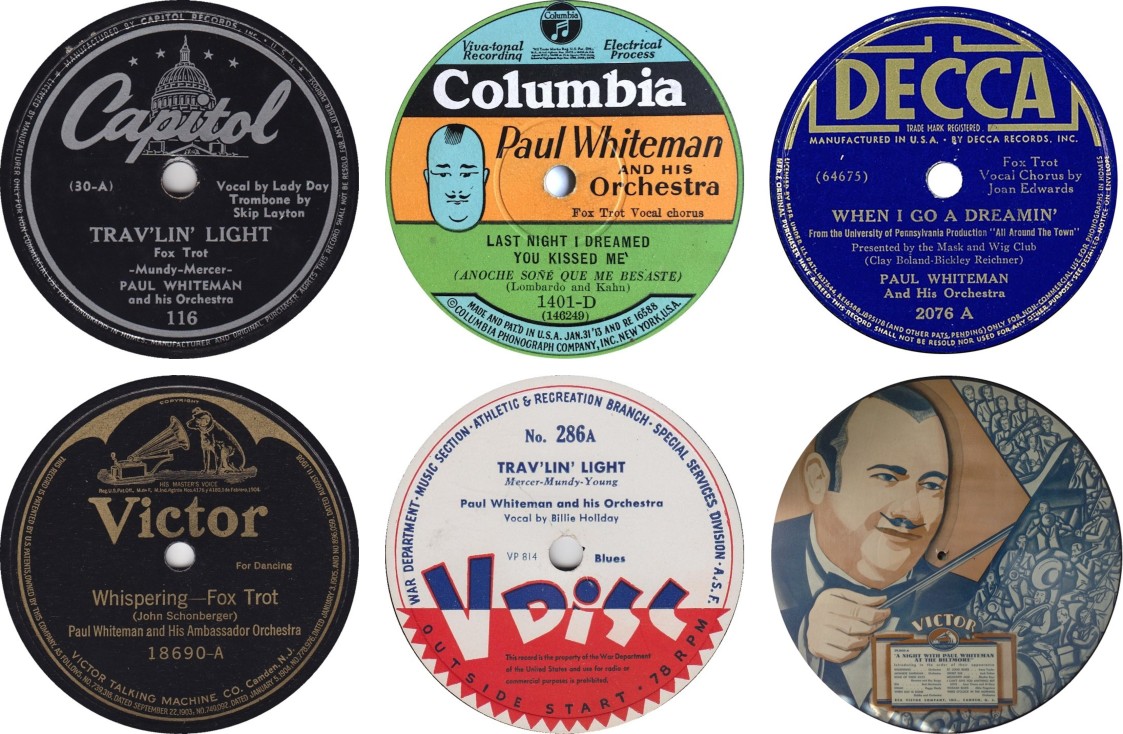 Paul Whiteman in the Movies 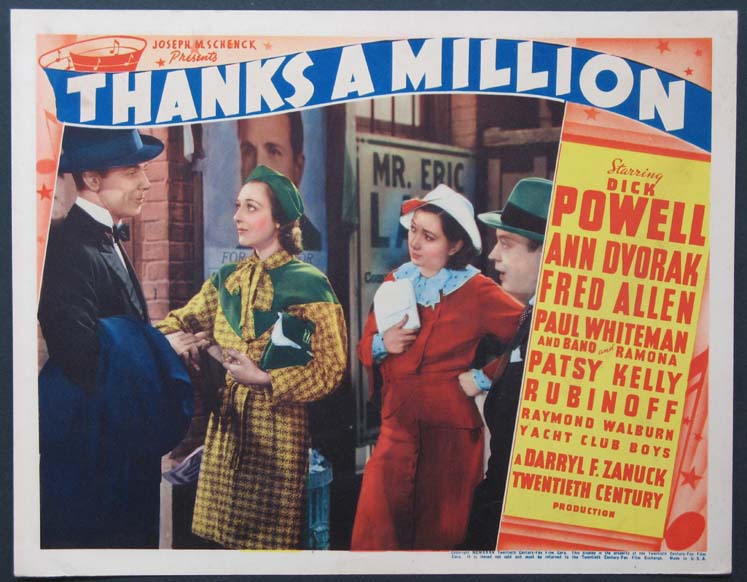