History was made this week on the Billboard Charts – April 4th, 1964 marked the first and the only time in the history of the U.S. Charts that a group (or any artist for that matter) would occupy – not just the top 2 positions, but the Top Five! 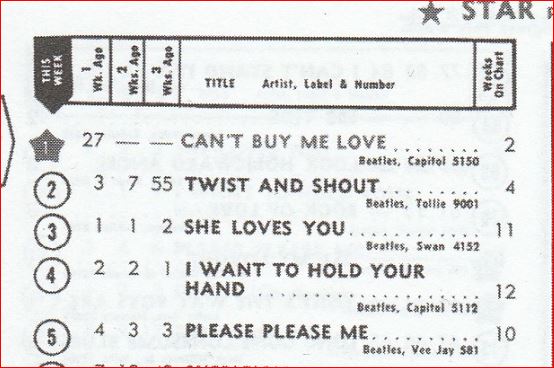 Many acts through the years have managed holding positions number 1 and number 2 simultaneously (Elvis was the earliest in 1956 with “Hound Dog”, and “Love Me Tender”). The Bee Gees were the first to follow the Beatles 1964 accomplishment with “Night Fever” and “Stayin Alive” in 1978. Then it would be a very long 24 years before it would once again occur – with Ashanti charting one-two with “Foolish” and “What’s Luv”. After that – six more acts would do a one-two.  Akon has done it on three different occasions with 3 sets of songs.

As presented below, the Beatles were joined by seven of their fellow country mates on the charts – In the months that followed that number would greatly increase.

Beyond the Top 10 – The boys from Liverpool enjoyed occupying seven additional positions within the Hot 100!

Number 2 – Twist and Shout – The Beatles

Number 3 – She Loves You – The Beatles

Number 4 – I Want to Hold Your Hand – The Beatles

Number 5 – Please Please Me – The Beatles

Number 31 – I Saw Her Standing There – The Beatles

Number 46 – Do You Want To Know A Secret – The Beatles

(Released on an extended play)

Number 68 – Roll Over Beethoven – The Beatles

(Demand was so great the Canadian release charted in the U.S.)

Number 79 – Thank You Girl – The Beatles

Number 87 – The Beatles with Tony Sheridan and Their Guests – MGM

(This LP would again be released by Vee Jay in August of 1964 – in what would end up being an extremely hard to find issue – shown below this one – The Beatles are depicted in art form due to Capitol Records preventing Vee Jay from using their actual photos any longer – and then eventually, Capitol’s muscle would completely push Vee Jay out of retaining any Beatles’ publication rights.)

Joining the Beatles – British Invaders on the April 4th, 1964 Hot 100 & Bubbling Under Chart

Number 10 – The Dave Clark Five – Glad All Over

Number 15 – The Searchers – Needles and Pins

Number 42 – The Carefrees – We Love You Beatles

(An obvious attempt at catching that Liverpool sound) Number 85 – The Four Preps – A Letter to the Beatles