NOTE: This page was updated on March 5th, 2018 based on my initial meeting with Vicky Morosan’s  granddaughter Valerie Jean at the Denver Record Expo.  Valerie’s mother Francis is Vicky’s daughter and she resides in Lakewood, Colorado to this day.

Band Box Records began in the early 1950’s as “Columbine” records.  A name change to Band Box occurred around 1958.  The company was owned by A. V. Pasca (Aurelia Victoria – maiden name) who later became Vicky Morosan.

Terri Hale – Granddaughter of Victoria – contacted us with additional biographical information.  Terri tells us: “Her name is Aurelia Victoria, but she did go by Vicky.  The family did emigrate to the United States from Transylvania, Romania.  However, their Romanian name is Pasca, which means bread in Romanian.  The name was inadvertently changed to Paskie by Ellis Island officials as her parents entered the United States.  The incorrect spelling remained much to the ire of my Grandmother.  My Grandmother, however, refused to ever use the name Paskie. It was a very sore subject with her.  We knew not to ever bring up the subject.  She would sometimes revisit the topic and I can still hear her today say in her thick Romanian accent that the Romanians are descendants of the Romans and not Slavic, as the name Paskie would imply.”

According to Valerie Vicky was making a journey by train across the U.S. from West Virginia destination Arizona with her daughter who had a health condition.  When the mom and daughter stopped in Denver and stepped off the train for a train stop break Vicky looked out at the Rocky Mountains and decided then and there to remain in Colorado which she did up until the time of her death.

Vicky resided at 1155 Reed Street in Lakewood, Colorado – a community just west of Denver proper.  This residence is now gone – replaced by condos.

(Denver Post): “Back in the late 1950’s, Vicky answered a for-sale ad in the paper for a recording studio at East Sixth Avenue and Ogden Street called Columbine Records. A dispute over the name with behemoth Columbia Records got Morosan to change the label’s name to Band Box Records. She moved to 220 S. Broadway and went into business. Denver had its Sun Studio.

(Columbine was owned by Karl Zomar, who recorded many local western musicians releasing them on 78 rpm singles).

“She loved music, opera especially. So it was funny for her to get into rock ‘n’ roll.” said Morosan’s daughter, Frances.  Morosan died during the making of the movie, in 2006. She was 97. “She would make demo records for whoever would come in the door,” Frances said. “She loved the business so much. She put those records in her trunk and hauled them all over the country, the hard way. She was just a working old fool.””

The Band Box studios were eventually relocated at 5136 West 41st Avenue (after the early acquisition of Columbine Records as described by the Post above).  This building is now occupied by “Freaky’s” – a small  ‘head shop’ franchise with several locations in the Denver area.

The recording studio was a very basic set-up.  At times, as shown below, Vicky would take the controls during a recording session.  She was truly a ‘Jill of all trades”, from administration, to talent scouting, record distribution, composing and much more.

Shown below is a very early Band Box label – when the label was located in downtown Denver.

Saints guitarist Joe Holenbek specifically recalls many sessions at a studio “around 20th and Champa” in what is now called “Lo Do”.  Colorado Country Music Hall of Fame inductee and Band Box artist Lee Sims recalls later recording sessions which were released on the Band Box “Rustique” and “Keyboard” labels having been cut at studios at Alameda & South Pearl (possibly Western Cine) and Evans & South Lipan.  Tom Lundin of the great Denver Blog site “The Denver Eye” was told by a local record collector that several sessions resulting in Band Box label releases were recorded in out-of-town studios which probably vouches for sessions by country artists such as Trevor Van, Johnny Dollar and Penny (DeHaven) Starr.

In addition, Vicky formed a relationship with musicians/composer/publisher James Myers who recorded as Jimmy DeKnight.  Through contacts with Myers, Vicky obtained rights to release several tracks from East Coast based musicians such as Joe Valino and Steve Gibson and the Red Caps.  In all there were about a score of Band Box singles released via Myers Publishing including one single by “Jimmy DeKnight” himself – who co-wrote the monster hit “Rock Around the Clock”.

Vicky Morosan was the driving force behind Band Box, acquiring the label in the 1950’s.  Dave Barhite of the Saints and Larry Higgins of Freddie and the Hitch-Hikers both remember Vicky fondly.  Dave recalls, “Before the studio was obtained on 41st Avenue, we spent many hours over at her house in Lakewood.  And she was always present at the recording sessions, and always offered opinion and suggestions.  Vicky appears briefly in the video “Gears, Grease and Guitars” (by Mike Olafson) – a look at Denver in the early days of hot rods and rock and roll.  In the film she is entered while well into her 90’s.  According to a Denver Post article she passed away before the completion of the film. 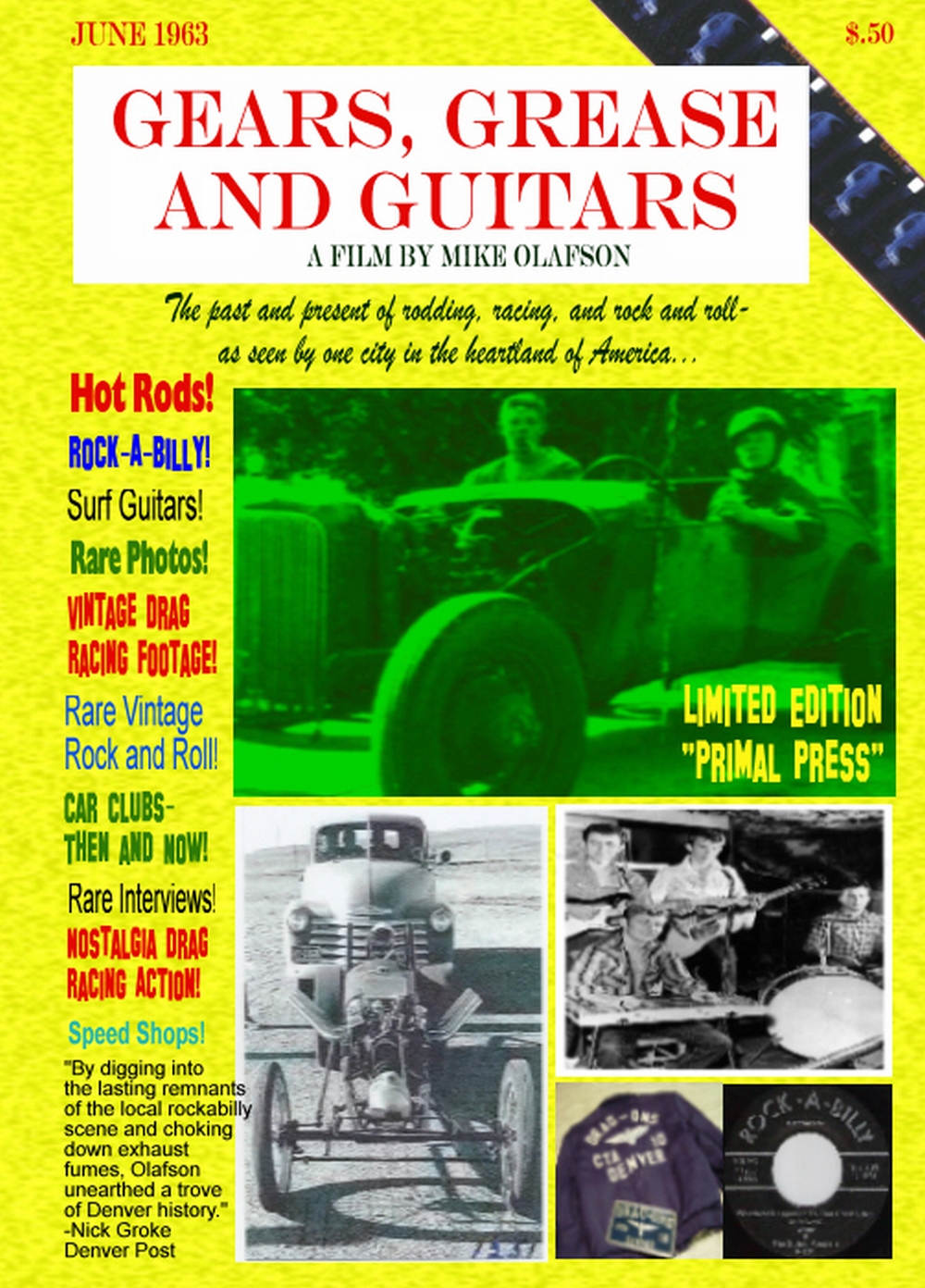 Valerie Jean related that Vicky lost her home in Lakewood at the Reed Street address and moved into an apartment.  This was apparently after the sale of the Band Box studio in North Denver well into the 1970’s.  Around 1977 a number of Band Box records were reissued displaying a Lakewood post office box number.

Vicky Morosan (right) at home in Lakewood with her daughter Frances

It was thought for a time that these recordings were unauthorized releases but according to Valerie her grandmother continued to sell Band Box recordings and those taking on the new address were likely out of stock and had to be repressed.

(From the Denver Post – October 1st, 2006: “MOROSAN, AURELIA V. Aurelia V. Morosan, 96, of Lakewood. Wife of the late Frank Morosan. Mother of Frances (Vernon) Olin and the late Louis Morosan, Virginia Ruppel, and Anna Konrade. Sister of Elizabeth (Ed) Ryder, and Daniel (Fran) Paskie. Also survived by fifteen grandchildren thirteen great-grandchildren, and numerous nieces and nephews. Recitation of the Rosary Tuesday, 7:00 PM, with Mass of Christian Burial Wednesday, 11:30 AM. Both will be held at the Archdiocese of Denver Mortuary. Entombment, Mount Olivet Cemetery.”

Vicky Morosan at the Piano – from “Gears, Grease & Guitars”

Vicky in 2006 shortly before her death

This 1957 ad casts some cloud on the ownership of Band Box – Although the accompanying text indicates that Vicky was the next buyer – interesting that the ad contact information indicates that Vicky (maiden name “A.V. Pasca) ” ran the ad so apparently she changed her mind and held on to Band Box.

Met with Valerie Jean (May, 2018) and this photo in her scrapbook lists the gentleman shown here as non other than “Clifford Mitchell” – Band Box artist – The Band Box hot rod shown was apparently sponsored by Vicky and raced at the nearby to her studio Lakeside Speedway.  Lady in photo is unknown.

I love the Band Box label and LP cover art.  Sort of distinguishes it from all others.  Here is what the granddaughter of Vicky Morosan (Band Box owner) Terri Hale relates regarding Clifford. “I spoke to my aunt and asked about the Band Box logo.  She said that it was designed by a man by the name of Clifford Mitchell, a Denver designer/artist that did all of the design work for Band Box.  She said that she could not remember if he came up with the name (Band Box) or my Grandmother or if it was a collaboration of efforts.”

Further to Clifford Mitchell is local artist and radio executive Dick Dedrick (Band Box LP 1018 “Animal Tales & Tunes”) account of Cliff: “I was a friend of Cliff Mitchell.  He was the artist for Channel 2 when I worked there in the 50’s.  He also did movie posters for Atlas Theaters.  He was fast and fabulous!   His graphic design would win a Grammy for campiest labels if there was such a thing (category).  In the early days Cliff was Lawrence Welk’s ‘manager’, of sorts.  He helped him book dates and come up with promotional ideas.  He said Welk once told him ‘We need to come up with some stunts.’  Doesn’t sound like Lawrence, does it?”  Show below are examples of the various Band Box Records labels as well as some cover art by Mitchell.

The Band Box logo was first registered on January 8th, 1963.  According to trademark data, first use of the name/logo was in July of 1954 – a date that does correspond to the purchase of the company by Vicky as researched and reported on “North of Pueblo”.

This address does appear on many of the earlier Band Box releases.  But not all.  For instance early release Band Box 204 carries the 41st Avenue address – the studio location.  This record should date around 1958 or so.  But subsequent Band Box releases carry the 1155 Reed Street address – a residentual single family home.  Some releases after this carry no address.  Then Reed Street appears up until about Band Box 287 at which time 41st Ave is back.  287 would date about 1962.  This runs true until Band Box 335 (Buddy Miller) which reverts to Reed Street (mid 1963) then right back to 41st Ave on 336 and continuing right up until the final record was pressed – most likely Band Box 393 by a group called Euphoria.

By the early 1970’s, the Band Box studio was probably idle.  The group Euphoria was most likely the last group to pass through the doors with a Band Box release to their credit.  The small ad below in Billboard Magazine  – in the March 20th 1971 edition was the apparent final attempt to sell Band Box.

I located an interesting item on the Bob Yeazel web site relating to the possible sale of the studio: (Bob Yeazel passed away losing a struggle with cancer.)

“I (Yeazel) bought an old recording studio called “Band Box Records” on 44th and Sheridan, a long time Denver icon.  It was a two track studio where, ironically I had cut a demo with a surf band years before.  You all stood around a mic and moved around to get your vocal balance.  This, of course was after you recorded the music on the other track using the same one mic technique.  You need more drums?  Move the mic closer to the drums!…….”  “I bought  it (the studio) from George Kreiger along with Brian Kreizenbeck……..The owner of  the building reduced the size of the studio and eliminated the practice room  attached and converted it to a small apartment. This is how it remains to this  very day.”

Yeazel then recalls that he may have sold the building back to Krieger – who is no relation to the Colorado Music Hall of Fame board member George Krieger.

“Hello, I’m the former owner of the collectors records stores in co springs in the early 80s and I have seen many Band Box records. the 45s with a zip code were pressed in the early 70s, don’t know if they were legit reissues or not but i had heard they were.  Perhaps Dave Stidman could elaborate on this. Giuseppe’s twist was recorded for Giuseppe’s cellar in col springs, the owner offered me a box of about a hundred of the 45 in the early 80s and I turned them down as I had several copies already and they didn’t sell.  I still have several copies of Band Box #103 which I got in a purchase from a western slope juker a year or so ago.  I really enjoyed reading this page and seeing the 45 labels which I had held in my hands so many times.”

So that is it for now for the Band Box legacy.  I am always searching for more tidbits and historical information relating to this great “big/little” Denver label.

Band Box at The Denver Record Expo Spring of 2018