I am at Starbucks this early A.M. as usual – knowing it is indeed the day when “the boundary between this world and the ‘other world’ have thinned”…. – I had to know this because a gigantic Beetle Juice just strolled in – decked out, very authentically  replicating Michael Keaton’s portrayal from that 1988 flick…

And then there was Peter Boyles on the drive over here reminiscing about his back-in-the-day annual overnights with friends and listeners in Denver’s haunts – (mansions usually).  And for background mood setting – “The Monster Mash” of course.

His interest in the ghoulish began early – real early – when just a young boy he worked in a movie theater and was captivated by the horror films that were shown there.  He would move on next to front a local swing combo called “the Wolf Eaters”.

Pickett tried his hand for a time in stand-up comedy in the late 1950’s and would work impressions of the ghostly characters he had enjoyed in films into his routine.

After a stint in the U.S. Navy, Bobby would join a group called “The Cordials” in 1961.  He didn’t stay long but would work with fellow Cordial Leonard Capizzi composing a Halloween themed novelty called “The Monster Mash”.  He shopped it to record labels but couldn’t get any takers – not until the always industrious Gary Paxton got ahold of it and agreed to produce it – placing it on his own “Garpax” label.

With Gary’s connections DJ’s began to spin the record and “The Monster Mash” made it’s mark for all-time.  Released in September of 1962, the song terrorized it’s way to the top of the charts by Halloween – perching there for two weeks and in the process selling a million-plus copies.  The song also climbed into the number 9 spot on the nation’s R&B charts.

Like all good monsters, the “Monster Mash” would not die.  In the Fall of 1970 it would peek it’s little head back out of the cobwebs if only for a brief visit – peaking at number 93.

But like Stephen King’s “Pennywise” – Boris and his “Crypt Kickers” were back again in the Spring of 1973, this time lighting up the U.K. charts and going all the way to number 3 – and again racking up one million copies in sales! (Went to number 10 in the U.S.).  The record’s third awakening was attributed by Pickett to an Indiana DJ named “Danny Dark” who decided to put it back on his turn table.

Pickett said he never met Boris Karloff – one of two central characters in his tune – but did meet the star’s daughter Sarah in later years and she said her father loved “The Monster Mash” but didn’t think it resembled him in voice.

And the “Crypt Kickers”?  Gary Paxton was one of them and singers Johnny McRae and Ricki Paige were the other two.  On the piano at the session was Leon Russell.

Pickett dabbled in movies, television, nightclubs and even did a stint on Los Angeles’ station KRLA in the 1963.  Pickett passed away in 2007 a victim of leukemia – He was 69. 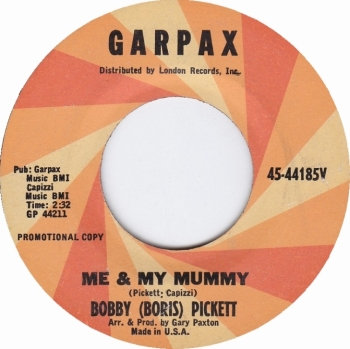 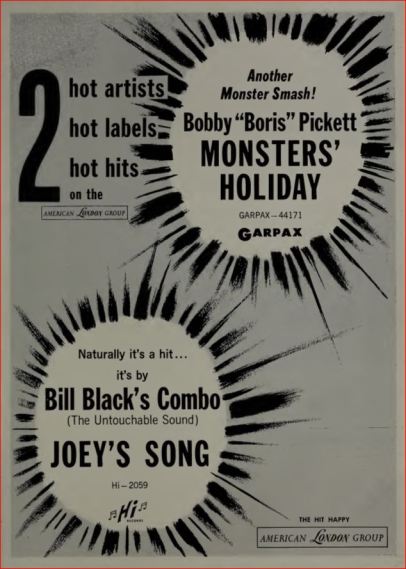 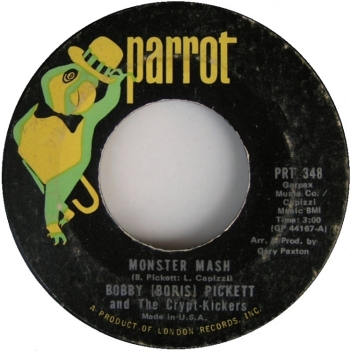 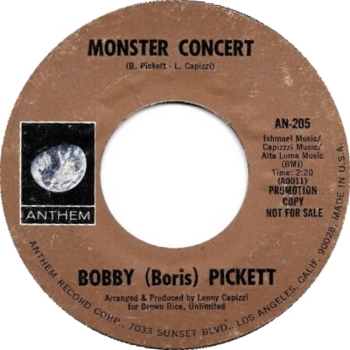