A Few Years Back….

…when I was sitting at the controls of my turntables picking through my 45’s to select the the next number to play for the attendees to Denver West High School’s 50th “Mega Reunion”, I was tapped on the shoulder by a female alumnus who had made her way up onto the stage – She was not smiling. I extended a friendly greeting and was about to ask what I could do for her when she abruptly fired out at me “What kind of music are you playing?” I was more than taken back and asked her what she meant.  “Play something we can dance to!” she barked. I told her I thought I was doing just that as I glanced out over the dance floor which was nearly full – getting down to Arthur Conley’s “Sweet Soul Music”. She persisted – spitting out at me, “You keep playing all of that ‘bubblegum’ crap”. I politely asked her to write down five or six songs which she thought were non-bubblegum oriented.  She did so and – with a scowl still planted on her face – turned and exited off the stage.  Her list included “Tequilla”, “La Bamba”, some Little Richard, Chuck Berry – vintage great stuff – all records I had brought along and were in the cue for play. The ‘bubblegum’ numbers she was referring to included “Louie Louie” by the Kingsmen, “Gloria” by Them and “Nobody But Me” by the Human Beinz – yikes!

I was puzzled to say the least.  But then it hit me.  The “Mega Reunion” covered six class years – (a big mistake you reunion organizers).  It ranged from the Class of 1960 through the Class of 1965.  There was a definite disconnect between the that Class of ’60 – from which she was a member and my Class – 1964.  She had grown up in her pre-high school years with the birth of raunchy rock and roll, Larry Williams, American Band Stand, ‘Do Wop’ groups, Gene Vincent and Eddy Cochran while mine – though passing through that time as elementary school students – were on-board when the girl groups arrived, Motown was launched (she probably did approve of some Motown), witnessed the teen pop crooners step forward both boy and girl – The Beach Boys – all the while preparing ourselves for the arrival of the four lads from Liverpool. So there we have it.  “Bubblegum music” as defined by the Class of 1960.

What has been called bubblegum music – as demonstrated above – may be in the ears of the listener.  What it definitely was – was music for the young – very young – even pre-teen in many instances – at least that is what it’s calculated inventors intended. The genre was more or less kicked off by the 1910 Fruitgum Company’s “Simon Says” in December of 1967 and was quickly followed by the trifecta of “Yummy, Yummy, Yummy” by the Ohio Express, “Jelly Jungle (Of Orange Marmalade)” by the Lemon Pipers (both April of 1968, and  “1, 2, 3 Red Light/Sticky Sticky” by the 1910 Fruitgum Company (July, 1968).

All three recordings came out on the adventurous Buddah record label which grew out of Kama Sutra records headed up by Art Kass.  Initially Neil Bogart was in charge and he brought on the duo of Jerry Kasenetz and Jeff Katz to spearhead the new label.  Jerry and Jeff came together while attending college in Arizona and finding a similar interest in music both moved to the East Coast to pursue music production.

The two have acknowledged that their productions – such as those above – were definitely targeting very young teens and pre-teens.  The music itself was a natural progression of the soft or “sunshine pop” being created by the mother label “Kama Sutra” (think Lovin Spoonful, Innocence & Sopwith Camel as well as a seemingly endless stream of flowery pop attempts.

The Ohio Express started off as “The Rare Breed” in 1966 and cut a tune called “Beg, Borrow and Steal” that same year not achieving any chart success.  Jeff and Jerry as “Super K Productions” obtained rights to a band name of “The Ohio Express” and used that name to redo the record releasing it on the Cameo label (of Cameo-Parkway). The Rare Breed weren’t brought on as “Ohio Express” and so a group had to be formed to promote the single (which charted at number 29 in late 1967. A band from Ohio was contacted, who were known as “Sir Timothy & Royals” and they assumed their new name “The Ohio Express” and hit the road. An LP resulted featuring the hit recording and featuring a mix of tracks some recorded by the new touring group, some by studio musicians and two tracks thrown in by a group who were in reality “The Measles” a group out of Ohio that included future star Joe Walsh. Cameo-Parkway went bust and so the Ohio Express landed with Buddah Records where they would transform from a garage band to a bubblegum power.  No members of the touring Ohio Express would enter the recording studio, their place taken by singer and song writer Joey Levine accompanied by session musicians.  All subsequent Ohio Express hits were recorded in this manner.

Levine was born in New York City in 1947 – an early-era ‘baby boomer’.  In addition to providing Ohio Express vocals, he sang lead for the “Kasenetz-Katz Singing Orchestral Circus”. Levine was also the lead voice for “The Third Rail” recording “Run, Run, Run” in 1967, of and then later lead for “Reunion” of 1974’s “Life is a Rock” fame.  During the 70’s Levine moved into commercial TV jingles (“Sometimes You Feel Like a Nut” – Mounds and Almond Joy) and continued on composing for Pepsi, Diet Coke (“Just for the Taste of It”), Sears (“Come See the Softer Side of Sears”) and beer giant Budweiser (“This Bud’s For You).

Beyond Buddah with Dante

Another bubblegum/soft pop artist was the another New York native, Ron Dante.  Ron came to the forefront via a fictional cartoon group, “The Archies”.  The Television version of the Archies made their TV debut in 1968 with group member Archie Andrews, Reggie Mantle, Veronica Lodge, Jughead Jones and Betty Cooper. The lead voices of the Archies was in fact Ron Dante on lead accompanied primarily by singer songwriter Toni Wine.  Their first release “Bang-Shang-A-Lang” reached a respectable number 22 and a forgettable follow up “Feelin’ So Good” stalled at number 53 with a quick chart departure. Then the big one hit.  “Sugar Sugar” was penned by Brill Building veteran Jeff Barry along with singer songwriter Andy Kim both of who participated on vocals backed by session musicians.  The bouncy little number was hard to resist and it soared to the top of the charts peaking at number 1 with a one month run in that slot. 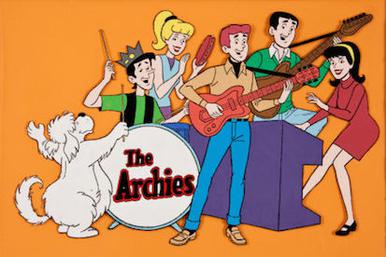 Simultaneous with Dante’s performing lead vocals for the Archies, was his involvement with “The Cuff Links”.  Once again with the Cuff Links we were listening to a group of studio musicians providing the instruments with Dante providing lead and all backing vocals.  This assemblage gave us “Tracy” (number 9) with the moderately successful “When Julie Comes Around” coming in at number 41.

Again the need for a touring band was evident and a group was quickly assembled.  But Dante passed on joining the group opting instead to record as “The Archies”.  He did agree however to provide vocals for an entire Cuff Links LP on which future recording artist Rupert Holmes lent producing contributions.  A second LP would follow – but his time without Dante – Holmes split the singing duties with vocalist Joey Cord.

In 1979 Ron would record an LP using the name “Dante’s Inferno”.  From there he went on to do television program recordings and more importantly – joined up with super star Barry Manilow providing accompanying vocal support. Bubblegum would move on from the intense sweetness of the Buddah releases – melting into the early 1970’s and morphing into a mishmash of forms provided by groups such as “The Partridge Family”, “The Cowsills”, “The Banana Splits”, “The DeFranco Family”, David Cassidy and so many more.