The Flying Saucer and those Wacky Break-In’s….

The Zany Novelty of Buchanan and Goodman…

Bill Buchanan and Dickie Goodman teamed up in 1956 releasing a two sided novelty called “The Flying Saucer Parts 1 and 2”.

The label was founded by the two young men, first called “Universe” but quickly changed when it was learned that there was another label by that name.  “Luniverse” certainly was an appropriate selection for most of the material to follow on the label.

Rather oddly, the R&B group The Del Vikings would land temporarily on “Luniverse” cutting the only long play released by Buchanan and Goodman on that label.  The Del Viking’s original manager, Barry Kaye, was looking to cash in on the nine tracks he had in his possession from a session with the group when they were associated with his Pittsburgh Fee Bee label. The effort was thwarted shortly after the LP was released when Dot Records threatened a lawsuit – Although it was released only a few copies made it into the record shops, that was the end of the line for the Del Viking LP.  Original copies are valuable but beware of a 1970 reproduction.  The 1970 version contains 10 tracks vs. the original nine.

The Del Vikings had one 45 released on Luniverse “Somewhere Over The Rainbow” b/w “Hey Senorita” in 1957.  Buddy Lucas and “The Casual Three” were the only two other acts to release singles.  The “Casual Three” in reality were Dickie Goodman working incognito.

Buddy Lucas fronted his own band and played saxophone.  He also fronted “Buddy Lucas & His Shouters” and he backed many artists as a session musician.

Buchanan and Goodman were childhood friends out of Long Island, New York.  They attempted to break into the recording business as song composers and knocked on doors and made phones calls to no avail.

They were reportedly inspired by a 1955 hit from the Platters, “The Great Pretender” with the line “Too real is this feeling of make believe” which they related to a tabloid newspaper shocking headline exclaiming that the “Flying Saucers Are Real!”

Bill became the “DJ” on the recording (which was changed to “The Flying Saucer”) and Dickie assumed the role of the “man-on-the-street”.  Then, 19 extracts from hit songs were inserted into the rapid exchange between DJ and reporter.

There would only be one additional charting Luniverse recording “Santa and The Satellite Parts 1 and 2” reaching number 32 in early 1958.  The DJ on this recording was Pat Sherman.

In 1956 the New York recording establishment wanted nothing to do with Buchanan and Goodman’s strange recording.  And so they decided to go straight to “The Man”.  They visited radio station WINS with their tape, and were received favorable by none other than Alan Freed.  He played the record – the phone lines lit up – A hit was born!

On a side note – the novelty was also highly inspired by Orson Welles classic terrifying broadcast “The War of the Worlds” back in 1938.  Why not?

In an odd effort to secure another “hit” the pair released the same recording with the title “Back to Earth” hoping to persuade to purchase the recording for a second time!

Out of Bounds in Outer Space

Almost before the record started spinning on radio stations, Buchanan and Goodman found themselves in hot water.  They were hit with a lawsuit by a layer representing multiple publishing companies.

Then – another twist – Many publishers were miffed by being excluded from their break-in hit – when it was discovered that recordings contained in the record were actually experiencing increased or revived sales!

The suit was simply put to bed when Buchanan and Goodman agreed to pay a few cents to each publisher represented on their big hit.

It seemed that things were settled but both Chess and Imperial Records continued with a suit of their own – with the Imperial artists Fats Domino and Smiley Lewis both pressing hard for fiscal damages.

All was finally settled when a judge found in favor of Buchanan and Goodman citing that “paraody” or “satire” was a protected form of speech and acknowledging the favorable publicity gained by include songs.

After all of this, Buchanan and Goodman had some fun with the threatened suits releasing “Buchanan and Goodman On Trial” with a jury comprised of the Martians who had invaded earth on “The Flying Saucer”.  Initially they released the “Trial” record with yet another dig at Fats – alluding to him as “Skinny Dynamo” using a clip from “I’m In Love Again” but then decided to give him a break – replacing the clip with one from “The Green Door” by Jim Lowe.

As could be expected, imitators starting popping up – one of the first being “Noel and His Outer Spacemen recording on Aladdin Records – releasing the very same song – both parts 1 and 2!

Then the guy who gave them a break got into the act with “The Space Man” composed by Freed and Steve Allen – a guy who was always up for a good spoof.

Syd Lawrence and Friends would do “The Answer to The Flying Saucer – U.F.O. (Men From Mars)”.  This track had the double audacity of actually using actual clips from “The Flying Saucer” and as well as a challenge to Buchanan and Goodman to “Sue us later, alligator!”

Other imitators included “Marty”, Dave Barry with Sara Berner and the “Mad Martians”.

No Banana’s for Goodman

Their next effort was called “The Banana Boat Story” a parody of “The Banana Boat Song” this time clipping from TV commercials.  Billboard magazine panned the release and it promptly disappeared – with very little air-play.

By 1959 it was time for Bill Buchanan to move on from partner Dickie Goodman.

In 1964, Goodman would team up with his friend and fellow composer of note out of the “Brill Building” Howie Greenfield releasing “The Invasion” b/w “What a Lovely Party” – which was met with silence – after all – The Beatles had arrived by then.

(For Greenfield think of many Neil Sedaka songs – as co-writer “Happy Birthday Sweet Sixteen” and “Breakin’ Up is Hard to Do” and then other big hits such as the Everly Brothers’ “Crying in the Rain”, the Shirelles “Foolish Little Girl”, Connie Francis’ “Everybody’s Somebody’s Fool” & “Breakin’ In A Brand New Broken Heart” (and many others), Jimmy Clanton’s “Venus in Blue Jeans” and Brenda Lee’s “Your Used to Be”.)

Backing up a bit – in 1962 – Bill teamed up with composer/musician Jack Keller to create Bobby Vee’s hit “Please Don’t Talk About Barbara” which reached number 15.  “Barbara” is one of my very favorite of Vee’s hits and made me think Goodman should have given that direction a bit more of a try.

(Jack Keller was a co-composer on the Colorado group, The Astronauts’ “Go Fight For Her”)

Perhaps he did in his own mind – He had songs recorded by or for The Three Stooges, Susan Smith, Joel Langran, The Little Toy Band and Eddie Platt and His Orchestra – Not exactly top of the pops artists.  He teamed up with Keller again in 1963 writing “Cry On My Shoulder” for Johnny Crawford – but this time – no cigar.

It is reported here and there on the internet that Dickie Goodman was 20th Century Records’ president for a time – but this is just a rumor – proven to be not true.

And Dickie? A Sad Ending…

Dickie Goodman was true to the novelty genre – writing, producing or performing a non-stop stream of goofy tracks all the way into the 1980’s – A selective discography of his involvement is presented below.  Can you imagine more than 30 years composing and performing break-in’s and novelty tracks?  In a way, Goodman’s body of work was a reflection of our society and culture and current events.

It is always puzzling to those of us on the outside when we learn about a tragic ending to a performer or personality.  Dickie Goodman took his own life on November 6th, 1989 committing suicide via gunshot

Recordings composed, performed or produced by Buchanan & Goodman (or an artist/group who appeared on their label):

1964 – Jekyll and Hyde – DCP International 1111 – My Baby Loves Monster Movies b/w Them From a Whodunit
(Dickie Goodman and Bill Ramal) – Ramal conspired often with Dickie Goodman on the wacky break-in’s.  He was a jazz musician – a sax player by trade – who worked with a wide variety of artists and including producing and playing on recordings by Johnny & The Hurricanes and Del Shannon.) 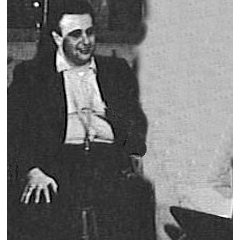