There was a moment in time back in 1964 which was the final day of what perhaps could now be cited as “The End of the Eisenhower Era”.  Not that anyone has ever ascribed that moniker to the date – but I thought “why not?”

We had us a couple of Bobby’s, a wild surfin’ novelty, a hot rod, a nice girl group recording, a little bit of soul, some West Coast garage, a curiosity out of France  and a ‘Wrecking Crew’ number just to round things out.

The following week, January 25th, 1964, this little ditty suddenly popped into the number 3 position – leaping from number 45 the debut chart position for the single.

That one took us all a bit by surprise.  We weren’t in the habit, nor did we have the means, to track anything that was going on across the big pond.  But they had arrived.  The following week, February 1st, 1964 the boys had taken their stance at the top spot in the nation ending a four week reign by Bobby Vinton.  They would remain there for seven weeks before dethroning themselves with this:

We were all asking ourselves, “Why two different record labels?  What gives here?”  Then the dam broke.  Along came April 4th, 1964 and our Billboard Top Ten appeared as:

Capitol, Vee Jay, Tollie, Swan!  Whooa!  And who were those “other guys” holding down the number 10 spot?  To complicate things more those rascals were far from finished – rounding out the Hot 100 were:

First Appearance of the Fab Four

Back in early 1963, Vee Jay Records and managed to latch onto a handful of Beatles’ tracks and the company would eventually exploit those to the fullest opportunity via multiple long play packages – to the point of ridiculousness (not for collectors however).  Vee Jay wasn’t overly enthusiastic when they acquired the tracks, but went ahead an released a couple of singles – Vee Jay 488 (released in February) and Vee Jay 522 (released in April) – with neither generating any noise.

“From Me to You on Vee Jay 522 managed to dent the “Bubbling Under” charts for six weeks peaking at number 116 in mid 1963 ahead of “I Want to Hold Your Hand” by several months.  The song would chart again when Beatlemania got under way this time on Vee Jay 581 which reached number 41 but was outperformed by its “A” Side – now being “Please Please Me” which reached number 3.

A couple of America’s radio stations had some insight to the future.  Chicago’s WLS “The Bright Sound of Chicago” is one of the earliest known outlets to feature a Fab Four cut – placing “Please Please Me” at number 40 on March 8th, 1963.

San Francisco radio station KEWB/91 as can be seen below came along just a bit later”Please Please Me” in their number 34 position on April 27th, 1963 – and yes – both stations cited the group as “The Beattles”.  Who knew?

The following week the song dropped to the bottom of their chart – at number 40.

Interestingly, several of the nation’s radio stations had the drop on Billboard as far as debuting the Fab Four.  Radio station WIBG out of Philadelphia placed the first issue of “She Loves You” at number 80 on their September 23rd, 1963 survey.

Swan latched onto “She Loves You” and “I’ll Get You” eagerly after one of their executives had returned from London where the Beatles were creating a frenzy.  EMI offered up the tracks which Capitol had refused – just as they did with the tracks which ended up on Vee Jay.  The first pressings were released in the fall of 1963 and are all white label releases.  Later the company would re-release “She Loves You” with the same catalog number but this time on a black and silver label.

Needless to say the total obscurity of Vee Jay 498 has made it a collector’s bonanza especially those initial copies which couldn’t spell the group’s name correctly.  The EBay record price tracking site – “Popsike” reports a $5,400 sale of Vee Jay 498 as recently as December of 2017.

Capitol Records would soon get off it’s duff and begrudgingly accept EMI’s offer to pick up the Beatles’ releases.  Capitol Records was not receptive to rock and roll.  They had come along kicking and screaming when it came to accepting the Beach Boys.  And Barney Hoskyns who wrote the excellent 1996 “Waiting For the Sun – A Rock ‘N’ Roll History of Los Angeles” tell us of Capitol “…Capitol executives – whiling away their time on the top floor of the famous tower as black waiters padded around with silver pitchers – all but dispensed with the services of Nik Venet was a clear indication of how out of touch they were, or how content to sit back while their coffers were swelled by the Beatles and Brian Wilson.  By the end of the decade (1960’s), the only new rock act they’d managed to break with any success was The Band.”

There were “flip sides” and now even a couple of records landing in OUR TOP TEN borrowed from our neighbors to the north!  There would simply be no relief for many months to come.  In rapid succession they brought a bunch of their friends along with them and at the same time inspired others to pay homage (all appeared in the first one-half of 1964 in the order shown below and all charted up through June of 1964:

It is custom for music histories to cite the advent of the British Invasion with the instant demise of all American pop stars.  It simply just wasn’t so.  Pouring over the charts Post I Want to Hold Your Hand there are just tons of girl groups, American garage groups, easy listening ditties (think Steve Lawrence), schmaltzy instrumentals, country tunes, Motown, soul – It was America for crying out loud!

All of these reached the Top Spot in the weeks following the arrival of The Fab Four: 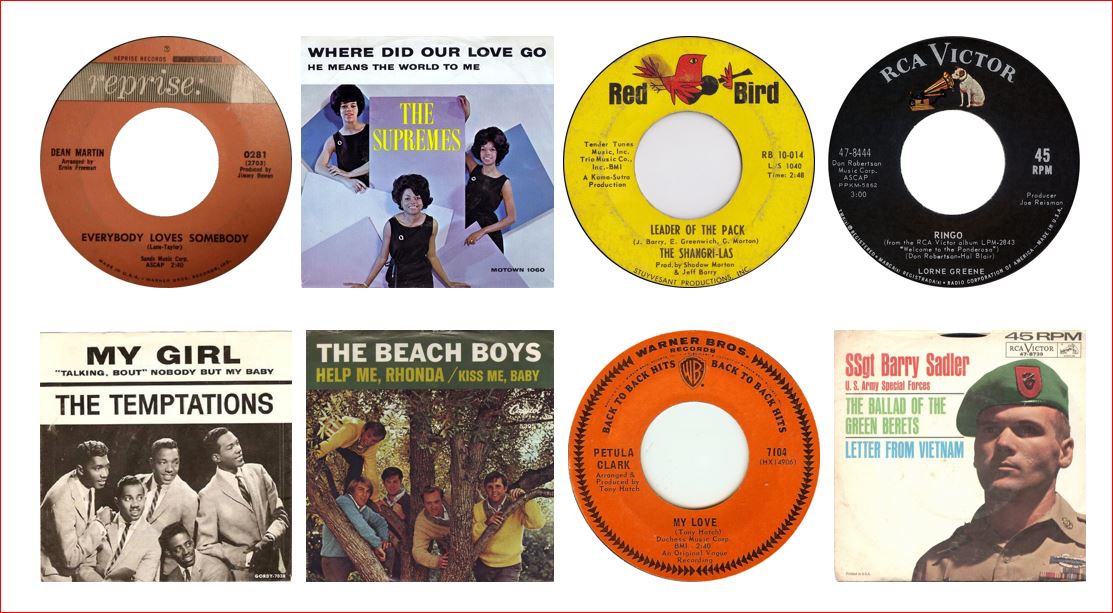 And was it the end of the Johnny’s and Bobby’s and Billy’s?

Bobby Vinton charted eight times pre “I Want to Hold Your Hand” and 38 additional times after.  Bobby Rydell would hold on for 4 additional chart records.  Jan and Dean were just getting warmed up – Post Invasion Arrival they charted 12 more times!