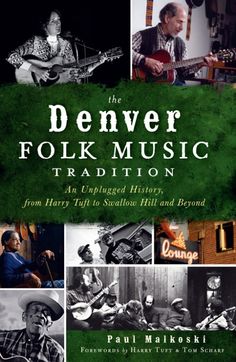 I just completed reading a locally based book “The Denver Folk Music Tradition – An Unplugged History, from Harry Tuft to Swallow Hill and Beyond” by Paul Malkkoski

The initial focus of this narrative is of Philadelphia native Harry Tuft’s folk journey through New York, then Chicago, out to the Rocky Mountains, onto the folk scene in San Francisco, back to New York before finally settling in Denver with the intention of establishing a unique enterprise for the Mile High City: a combined music instrument store – vinyl store – folk paraphernalia store, community gathering place.  And that is just what he did when he rolled into Denver in 1961.

Tuft’s earlier stay in Colorado combined living, skiing, and working in the Denver’s mountain communities including Georgetown at a place called “The Holy Cat”, then “The Berthoud Pass Lodge” and also in Aspen.

In California he met up with a friend from Philadelphia, Dick Weissman – a musician who by that time in 1961 was in a group called “The Journeymen”, a group which included future “Papa” John Phillips as well as folkie Scott McKenzie later of “San Francisco (Be Sure to Wear Some Flowers In Your Hair)” fame in 1967.  Harry managed to do a little performing at San Fran’s “Hungry i”, but in short order accepted that his future would not be as a performer.

So after thinking through his objectives, he made his way back to Denver, landing in late 1961, where he would soon establish his vision…. and it would be known at “The Denver Folklore Center” in 1962. 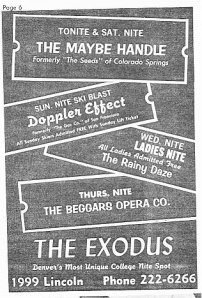 Malkowski takes us on a brief historical journey of local Denver happenings including venues “The Exodus”, “The Green Spider” and Harry Tuft’s “Folklore Center”, as well as other venues and performers who were either local or passed through in support of Denver’s folk scene, such as Joan Baez, Ian and Sylvia, Arlo Guthrie, Pete Seeger and many more.

Tuft worked with Baez in promoting her first Denver appearance (at the Denver Auditorium) as he did with John Phillips with his “Mamas and Papas”.

Mention should be made that early on during Harry’s concept stage, he wanted very much to provide quality folk recordings for the public, and borrowed a conservative amount of money to purchase records as initial inventory at the “Center”.  God Bless Him!  I have met many collectors in later years who vividly and fondly recall perusing the Folklore’s offerings.

And today, at 1893 South Pearl, the store continues to provide “new & used instruments, recordings and books” according to the store’s signage.

Here is an article by Ashley Dean of “The Denverite” web site detailing the sale of DFC in August of 2016.

Next in Malkowski’s narrative, he diverts to the beginnings of true folk – non-electric folk – backwoods folk.   Author Malkowski dives into a rather detailed history of the local area folk collective, “Swallow Hill Musicians Organization”, which was closely aligned with Tuft’s Denver Folklore Center through the years.  (Swallow Hill’s web site history refers to the namesake for the organization being drawn from the “surrounding Swallow Hill neighborhood).

Swallow Hill had many leadership changes and faced many fiscal and organization challenges through the years, moving often, reorganizing, taking different directions, working hard to fund-raise – but most of all surviving – even to this very day and perhaps most importantly providing a true sense of folk community.

They started off, located in a shared space with The Denver Folklore Center on South Broadway, next moving to a South Pearl Street location.  Eventually they found permanent ground at 71 East Yale just off Broadway, where they remain today.  In addition they have presence in both the revitalized Highlands and Stapleton neighborhoods of Denver. 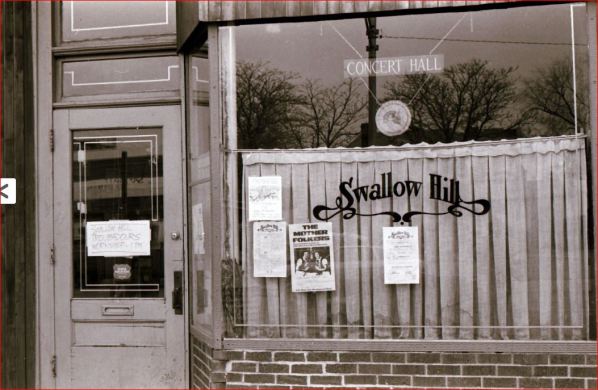 Lots of local acts are touched up in “Denver Folk Music” including Chris Daniels who headed up Swallow Hill for a time (played with “Magic Music” and “Chris Daniels and The Kings”), Cliff Eberhardt, Paper Bird, Corey Harris, Hot Rize and many more. 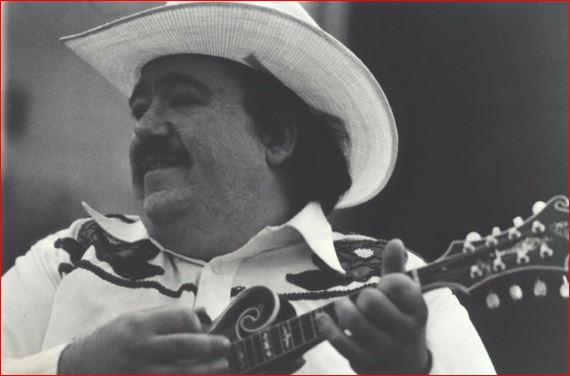 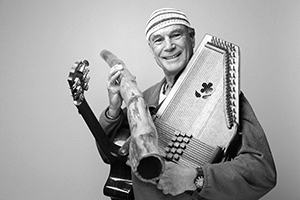 The book continues on describing the many directors and leaders who passed through the ranks, always maintaining their focus “…to build community by connecting people to diverse music traditions on the stage and in the classroom”.

So, thanks to the many dedicated musicians, artists, the fans and visionaries, folk lived and continues to live on at the foot of the fabulous Rocky Mountains.