On a Mission in Colorado!

During the past week a name popped up for me twice – taking me somewhat by surprise.

The name was that of a fellow I took to be strictly a ‘pop singer’ in the genre of the “Bobbies”, “Johnnies”, “Frankies” and so on.  This ‘pop’ singer was one Donnie Brooks – the voice behind “Mission Bell” and “Doll House both released on Era Records in 1960 – two of his three recordings to chart.

Donnie Brooks was born in February of 1936  in Dallas, Texas John Dee Abohosh.  His early influences were country but definitely leaning towards rockabilly.  While still a teen, John moved to the Los Angeles area and assumed the name “John Faircloth”.

John would begin infiltrating the Hollywood recording establishment as early as 1957 and it was around this time that he assumed a new name “Donnie Brooks” probably at the recommendation of his then manager – Linda Stewart.

Back to “El Monte”

Having just Posted on Art Laboe’s El Monte Legion Stadium Venue – I was drawn to the name of Donnie Brooks – who as placed on the bill there ahead of any recording success in the mid 1950’s where he would perform the Ray Charles’ hit “What’d I Say”.  Apparently Brook’s energy level captivated the teenage crowd. 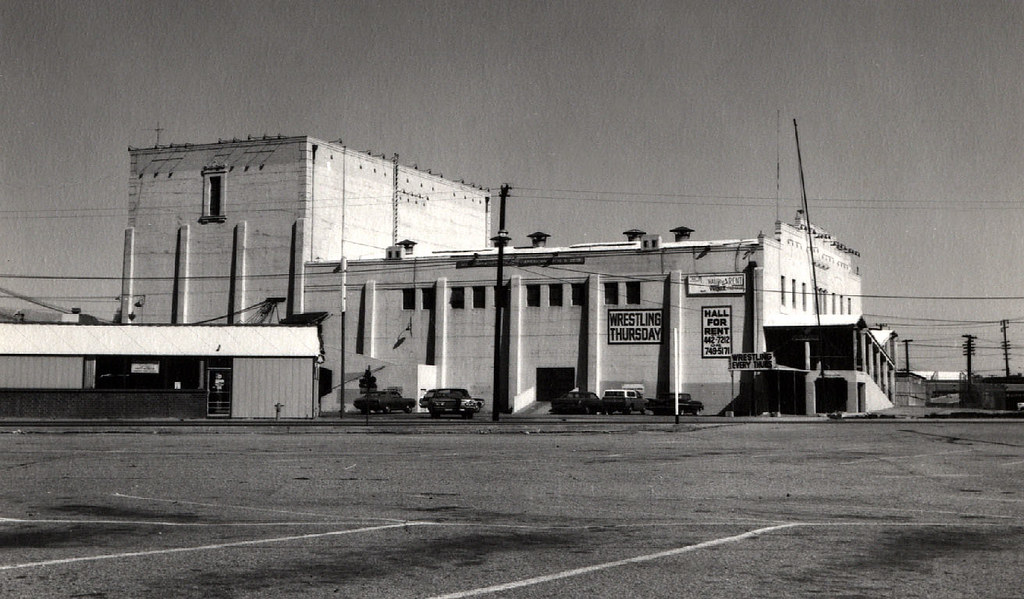 Nearly all the musicians appearing at El Monte would enjoy hit recordings which were currently on the record charts at the time – Brooks being an exception to the norm.

From Rockabilly to Mission Bells

Donnie had tried out some other names for recording purposes – starting in 1957 with a derivative of his chosen name – “Johnny Faire”.  He released two singles on the southern California “Surf” label the first in late 1957 and the second early in 1958.  These tracks were not surf music by any means – They were straight ahead rockin’ rockabilly – especially the raw “Bertha Lou” composed by John Marascalco and recorded by several musicians in 1957 and later by neo-rockabilly singer Rocky Burnette and also the Memphis Rockabilly Band. Interestingly Dorsey Burnette also released his version of “Bertha Lou” on the same label as Brooks – “Surf” also in 1957.   Rockabilly singer Clint Miller was the one musician to place the song on the Hot 100 charts – peaking at number 79 in early 1958.

Brooks would take additional cracks at rockabilly recording as “Johnny Jordan” in late 1958 on the “Jolt” label with “Don’t Cry Little Baby” and then again as Dick Bush also in 1958 on his new label Linda Stewarts’ secured label Era just ahead of his name change over to Brooks – The tracks are rockers – though seeming a bit overstated to me – “Hollywood Party” and “Ezactly”.

A few months later (summer of 1959) Brooks would release “If You’re Lookin'” an obvious Buddy Holly and Crickets treatment – basic stuff – no fluff.  Two more records on Era would keep with the rockabilly treatment – Duane Eddy-type-guitars – echo and so on – then everything changed.

“Mission Bell” was composed by William Michael and arranged by Danny Gould – Rockabilly was placed on the back burner – Orchestration with strings, girl group backup – and a soft lilting Donnie Brooks – resulted in a number 7 smash for Donnie.  Era would quickly jump on the success of “Mission Bell” with a ballad “Doll House” – which reached number 31 – an okay tune but not a “Mission Bell”.

Four more months would pass before Donnie released “Memphis”.  This wasn’t the same song rendered by Johnny Rivers in 1964 – his debut – a number two hit.  Now oddly, right after the release of “Doll House” and just before “Memphis” Brooks would strangely take the name of “Johnny Rivers” to release an historic singing narrative tribute to the fateful Confederate prisoner of war camp “Andersonville”.  Can’t find any reference to why this name.

The ‘real’ Johnny Rivers of the future – was John Henry Ramistella who took famed DJ Alan Freed’s recommendation in New York City in 1958 – convincing him to make the name change (thinking of the Mississippi River as it turns out).

Brooks would continue on with Era Records after “Memphis” which charted at a meager number 90 Hot 100.  He released seven more for Era – Then it was onto a succession of record labels including Reprise, Challenge, Yardbird and Happy Tiger.

(Brook’s rendition of Bill Joe Royal’s “Hush” is very interesting – I like it.)

(Larry was the drummer for Denver’s “Freddie & The Hitch-Hikers” as well with “Don May & The Gigolos”, the “Daleks”, the “Valiants” and the “Pete Tracy Trio” as well as others.)

As Larry can best recall, it was back in late 1960 in Colorado when he and the Hitch-Hikers were approached by a local promoter – the mother-in-law of local garage group leader John Maul (“Maul and the Cutups”).

She was working out an office on West Colfax and she was looking for a band to back a popular national recording artist – who turned out to be Donnie Brooks.  Higgins is pretty certain that the connection with the agent was via Band Box Records’ owner Vicky Morosan.  Band Box was the label which recorded Freddie & The Hitch-Hikers as well as the Gigolos.

The gig called for a quick stint with Brooks up to the adjacent State of Wyoming appearing in the towns of Lander and Laramie.

“As I recall, we played both towns at the local armories”, stated Higgins.  He continued, “I remember there being snow on the ground” and so we’ve placed this mini-Brooks tour at wintertime, 1960 after the success of his first hit “Mission Bell”.

“I remember driving up to Wyoming with Brooks”, said Higgins.  “He was a nice guy, easy to get along with.  We talked about the pending performances – going over the selected songs.”

The Hitch-Hikers would open the show with a rock and roll set.  “We did a lot of the usual expected stuff – Chuck Berry, Bill Haley and the Comets,” stated Higgins.

I asked if Donnie seemed to be a rocker at heart or was his act leaning more toward the smooth pop of “Mission Bell”.

Higgins responded, “He was a rocker all the way.  He followed our set with more pure rock and roll”.

I was very curious – wondering just how the Hitch-Hikers would back Brooks on “Mission Bell” if he indeed perform it – which seems would have been a must.

Higgins replied, “We just proceeded to back him in our style.  I think we had a couple of little chime type bells or something that we threw in but we did it.”

Larry went on to say the teens danced as he recalled to the Hitch-Hikers’ sets but would crowd around the band stand when Brooks came on – definitely a ‘heart throb’ for the girls!

Larry recalled a rather amusing detail relating to the Laramie performance:  “When it was time to be paid the Hitchhikers lined up and for the most part we were handed fist fulls of silver dollars!”  He further remembered, “We were all wearing our sporty jackets and we bogged ourselves down stuffing the silver coins into the pockets.”

Immediately following the Wyoming appearance, Brooks and the Hitch-Hikers headed for another performance in Colorado Springs.  “It was on Sunday, I remember, because our Wyoming performances were Saturday and Sunday,” stated Higgins.

A special highlight memory for Larry at the Springs’ performance was the presence of famed musician and later producer Jimmy Bowen (and his wife – quite gorgeous as Larry recalls).  Bowen didn’t perform but was there to see his friend Donnie Brooks. Bowen had experienced success in the late 1950’s with “I’m Stickin’ With You” and “Ever-Lovin’ Fingers” a double sided national hit at numbers 14 and 63.  Bowen had emerged from the rockin’ “Orchids” a group which included Buddy Knox as well as drummer Dave Alldred who went on to record and perform with “Dickey Doo and the Don’ts” of “Click-Clack” fame – Swan Records.

Bowen, Knox and the Orchids

I asked Larry about backing any other noted musicians – and he casually recalled a big one – Ray Charles.  That experience was a bit more formal (in Colorado).  Larry remembered that Ray really didn’t have anything at all to do (or say) to the Hitch-Hikers – They just went about their business of playing rock and roll – and he went about his own with his usual entourage of musicians and backing singers.

Donnie Brooks is an inductee into the Rockabilly Hall of Fame – He passed away in February of 2007, the victim of a heart attack – He was 71.

Larry Higgins led a very interesting musical life performing at many venues around Denver and travelling the country and he is oft’ consulted (by me) when I need a fact check, a tidbit, or a rock ‘n roll tale.

Larry Higgins on Drums (in back) 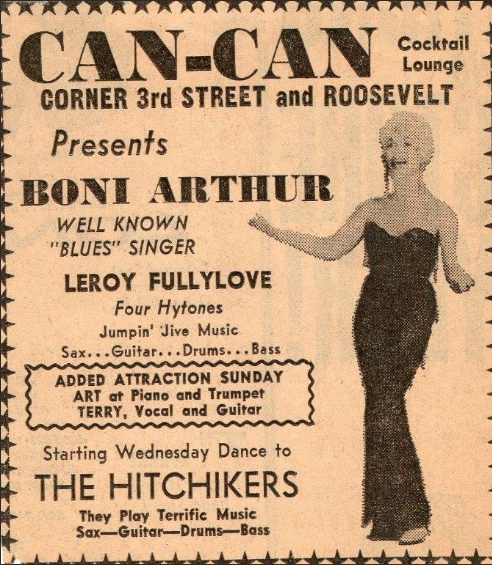 Donny Brooks in the Movies

Donnie landed some small parts in a few motion pictures back in the 1960’s: 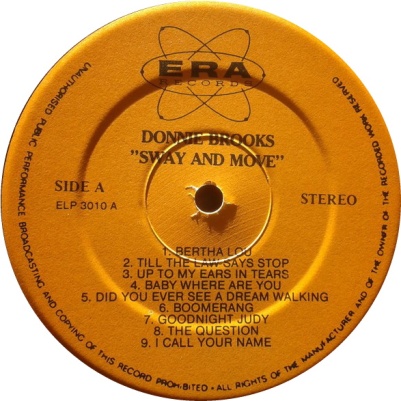 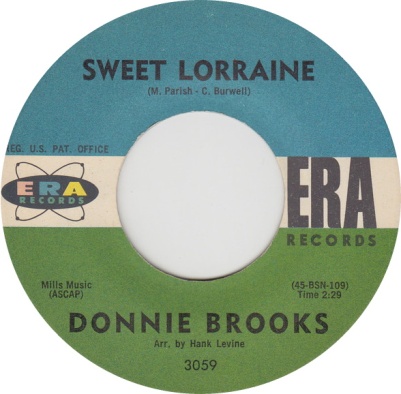 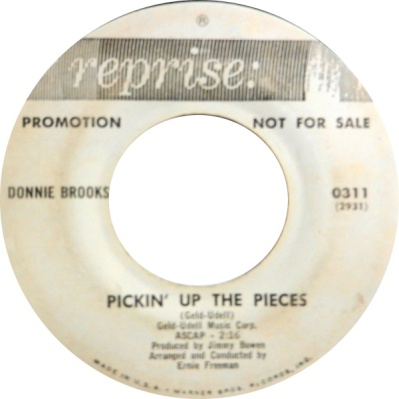