The Historic but Fleeting Career of Doug Poindexter Poindexter was born on October 19th, 1927 in Vanndale, Arkansas.  There aren’t any extensive biographies relating to his musical life.  Like so many others, he counted Hank Williams as his primary influence.  At the age of 26 he would make the move to Memphis, Tennessee where he would from his first professional group which he called the Starlight Wranglers.

Among the musicians making up the Wranglers were a couple of unknowns at the time, bass player Bill Black and lead guitar player Scotty Moore.  Other members of the Starlight Wranglers were Tommy Seals, Millard Yow, and Clyde Rush.

Poindexter found his way to the Sun Records’ studio where he met up with Sam Phillips.  It was May of 1954.  The session would result in only two tracks – “New She Cares No More” along with “My Kind of Carrying On”.  The tunes were released on Sun Records catalog number 202.

The single would represent the only time that Poindexter would enter a recording studio and Sun 202 would be his only vinyl release.

So What Is So “Historic” About That?

Well, according to rockabilly historian Craig Morrison the moment was historic first because by being Poindexter’s only record as stated above, but more significantly it was historic because it would be the last country record cut in the Sun studio before the next session at Sun – which came six weeks later – and produced first rockabilly/rock and roll gem “That’s All Right” by – yes – a 19-year old Elvis Presley!

More significance is added to the event, as Scotty Moore and Bill Black would sit in with Elvis on his historic session.  When Presley’s record was released he had yet to put together a stage show, and so the future king of rock and roll was invited to ‘tag along’ with Poindexter and his Wranglers joining them as a member of the band.

Poindexter liked Elvis but wasn’t overly impressed with his early style.  And as Morrison relates, Poindexter confided to him in a 1980’s interview “We were strictly a country band.  Elvis worked hard at fitting in, but he sure didn’t cause too many riots in them days…. Frankly, I thought the boy would starve to death.”

Some sources attempt to categorize Poindexter’s “B” side on Sun “My Kind of Carrying On” as ‘rockabilly’ – but just give it a listen on Youtube and that theory is quickly dispatched!  Reportedly Poindexter played on some tracks of Presley’s debut LP playing either guitar or drums. 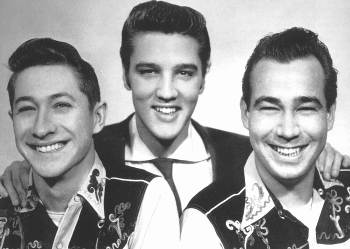 So Poindexter would perform for a while, but his heart just wasn’t it.  He was asked to appear on the Louisiana Hayride at the very same time as when Elvis was making his debut there but turned it down.  And then he walked away from music at the end of 1954.

A friend of mine residing here in Colorado, musician Eugene Harrell, performed on the famed “Louisiana Hayride” in 1954 and during his six-month stint on the program with “Circle 6 Ranch Boys”, the group shared a dressing room with the yet to be even “up and coming” Elvis.  Gene recalled how polite Elvis was – very quiet and unassuming.  “That was before the “screaming for Elvis” days”, Gene recalled.  (Harrell is an inductee into the Colorado Country Music Hall of Fame.)

In 1982 Doug was invited to attend a recording session put on by rockabilly friend Paul Burlison – A lot of the old country crowd were there – Poindexter enjoyed reminiscing – but declined to sing.  And that was that…..

Of course Elvis would pick up Scotty and Bill to back him on future recordings and appearances and they would become the “Blue Moon Boys”.

More country artists would enter the Sun recording studio after Elvis’s history altering session in 1954, but the game had changed.  Sam Phillips was on a new mission and would soon be joined by thousands of others, testing the rockabilly and then rock ‘n roll waters!

Scotty Moore and Bill Black are both inductees into the Rockabilly Hall of Fame and The Rock and Roll Hall of Fame.