Female record label founders in the U.S. emerging during the golden age of rock and roll were far from being the rule.  But there were some remarkable exceptions: Vivian Carter at Vee-Jay; Estelle Axton at Stax and more obscurely but remarkably, Colorado’s own Vicky Morosan who almost single handily headed up Band Box Records in 1958.

Out in New Jersey it would be a housewife in pursuit of what could almost be described as a hobby – something to do with newly available found time with children tucked away in school.

Her entry point came via Florence’s daughter, Mary Jane, who would introduce four classmates from Passaic High School who had entered a talent contest at the school performing as “The Poquellos”. 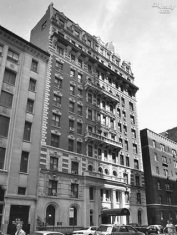 A get-together was arranged by Mary Jane with mom and after some coaxing, the girls would come under the tutelage of Mrs. Greenberg and cut their first record in early 1958 – having changed their name briefly to “The Honetones” and then quickly to “The Shirelles”.

A group penned track “I Met Him On a Sunday” backed with “I Want You To Be My Boyfriend” was released on Florence’s new label Tiara, which Florence quickly sold to Decca Records a deal which included the Shirelles’ contract.  “I Met Him On a Sunday” did manage to enter the Billboard Charts and reached a respectable number 49 position.

Florence used the proceeds from the sale to start up Scepter Records in 1959 basing it in New York City.  The first release on Scepter was by Don Crawford and the Escorts, “Why, Why, Why” b/w “Ugly Duckling”.  In the meantime Decca, after releasing two additional Shirelles’ singles, decided to let the group go, and so they returned to Florence and provided her with the anchor her fledgling label needed.

The girl’s first Scepter release was a very modest hit “Dedicated to the One I Love” (#83 in the summer of 1959) – a remake of a 1958 effort by The Five Royales.  The next two releases by the Shirelles flopped and then along came Luther Dixon, a composer with impressive credentials, who entered into a working agreement with Florence in an attempt to give of boost her group of young musicians.

His first effort for the Shirelles would hit pay dirt  – “Tonight’s The Night” which was actually designated as a “B” side, but would get the air play and to to number 39 on Billboard.  Scepter Records now had some momentum and Luther struck quickly again by grabbing onto a ditty composed by husband and wife Brill Building composing team Carole King and Jerry Goffin, “Will You Still Love Me Tomorrow” – This one skyrocketed to the top of the Billboard Charts in late 1960 and was followed by two more Shirelles’ destined-to-be classics, “Dedicated To The One I Love” (#3) and “Mama Said” (#4) – “Dedicated” was actually dusted off from a 1959 Scepter session.

From July of 1959 into the summer of 1967, the Shirelles would chart 25 times on the Hot 100 with seven top 10 recordings, including their biggest and signature hit “Soldier Boy” which remained at number 1 for three weeks in early 1962 – a song again penned by Dixon sharing composing credits with Florence.

Following the success of the Shirelles, Greenberg, in 1962, would land her a young lady who would become her most successful artist and one of the top recording stars of all-time – Marie Dionne Warwick.  Dionne had been doing some vocal background sessions working with Atlantic Records’ Drifters when she was discovered by composer Burt Bacharach.  Burt asked Dionne to do record a few demo tracks for him in order for Bacharach to approach various record labels (Bacharach along with his partner Hal David were both Brill Building fixtures).

Greenberg brought Warwick into the Scepter family as part of a Bacharach-David-Warwick package – providing the young composers with the freedom they were seeking to do things their way.  It paid off starting with late-year 1962 “Don’t Make Me Over” a very soulful and full throttle Warwick effort which reached number 21 on the Hot 100 and number 5 R&B. (“Don’t Make Me Over” was another track designated as a “B” side).

The next two singles didn’t get much attention but then along came “Anyone Who Had A Heart” (#8) and “Walk On By” (#6) and Dionne the legend was firmly established for Bacharach/David and Greenberg/Scepter.  Dionne would enjoy 38 hit recordings with Scepter into 1971 before departing the label.

Next to the Shirelles and Warwick, Scepter’s next most successful artists would be B.J. Thomas (Billy Joe Thomas) – an artist who had been recording for several labels since 1963 before arriving at Scepter in 1966.   Thomas would remain with Scepter into 1972 before departing for ABC Records.

Thomas scored 19 hit recordings for Scepter including his 1969 number 1 recording (4 weeks at the top spot) “Raindrops Keep Falling On My Head” from the motion picture “Butch Cassidy and The Sundance Kid” – penned by the way by – who else – Bacharach and David.

During the Shirelles’ great run, Florence established a subsidiary label, Wand, a label which more clearly focused on solid rhythm and blues and rock and roll acts for the most part, whereas Scepter journeyed here and there and everywhere.  Wand’s premier group would be the Northwest rockers “The Kingsmen” and they would be joined by R&B musicians on Wand Chuck Jackson and Maxine Brown – with the three acts providing the bulk of the Wand catalog.

And so the Scepter Records story is founded by talented and determined females; Greenberg, The Shirelles and Dionne Warwick.

Florence Greenberg retired from the music industry in 1976 selling her enterprise to Springboard International who flooded the market with re-releases, often ignoring quality, on the Trip, Springboard and Up Front record labels.  Florence had earlier turned down a six million dollar offer to buy her business in 1965.

Greenberg passed away on November 2nd, 1995 from heart failure at the age of 82.

The Shirelles are ranked by Rolling Stone Magazine as the number 76 greatest artists of all time and were inducted into the Rock and Roll Hall of Fame in 1996.  Two of their hits, “Will You Love Me Tomorrow” and “Tonight’s the Night” are ranked also by Rolling Stone in the 500 Greatest Songs of All Time.

The original Shirelles were Shirley Owens, Doris Coley, Beverly Lee and Addie Harris.  Coley passed away in February of 2000.