The Rino family relocated to Denver where they resided on Galapago Street in a West-Denver neighborhood situated close to St. Joseph Catholic School which Frankie and his siblings would attend.

After graduating in 1962 from St. Joseph High School in Denver, Frankie joined “The Checkmates” a ‘garage band’ that included Ray Sekera, Curt Fisher (drums) and Dave Adams (guitar). The Checkmates started off in the early 1960’s as “Johnny & The Checkmates prior to replacing Johnny (who was John Paul Jones) with Frankie.

Frankie would make an appearance in KIMN’s “Teen Music and Dance Festival” along with 15 local Colorado bands as well as national recording star Johnny Rivers.  The two KIMN weekly survey sheets shown below are from November 15th and November 22nd, 1965.

At a very early age, Frankie and his band, the Checkmates performed in small local venues and then were booked into a 3.2 nightclub around 1960, located on West Alameda in west Denver which would evolve into the “Galaxy” a bit later in the 1960’s.  Frankie recalls that early on the spot had another name, which Frankie recalls was “The Epic”.  The Galaxy building still stands today, serving as a veteran’s club.  At some point The Checkmates entered the Tom Harvey Sound Recording studio located at 1699 Lincoln Street in Denver in the early 1960’s laying down two tracks “China Doll” and “Surprise” which survive in Frankie’s collection today on a 12-inch 78 RPM acetate!

Off to Buddy Holly’s Stomping Grounds – Frankie Rino & The Squires

In November of 1965 Frankie and his next group, “The Squires”, headed south to the famed Norman Petty Studio in Clovis, New Mexico – home base for Buddy Holly and the Crickets as well as many others including Jimmy Gilmer and the Fireballs.  They cut two tracks, “Maybe The Last Time” and “We Belong Together” both of which were not released at the time but have since been made available digitally by “Nor-Va-Jak Music Inc.” a company that acquired the rights to the Norman Petty Studio recordings and masters (see the Frankie Rino Discograpy)

Since then “Nor-Va-Jak Music”, the James Brown number “Maybe the Last Time”has been included a CD collection titled “Norman Petty Recording Studios – Vault Series 1965-1969 Volume 3”.  That same CD also includes classic cuts by three other Colorado based bands, the Teardrops, the Trolls and the Chandells all from Pueblo, Colorado.

Frankie’s next group, “The Innovations” accompanied him on a long play recorded in Denver independently and released in 1969.  Members of the Innovations were:

Les James would later form his own trio in the 1980’s and would often be joined by Frankie appearing in local Denver venues.  The group released one long play album titled simply “Frankie Rino with the Innovations” recorded and produced by noted Denver area music executive Fred Arthur in 1969.

The Colorado Express with The Rendon Brothers – Vegas Bound

Moving into the 1970’s Frankie was backed by “The Colorado Express” which included Flo and Kenny Rendon – “Express” founders along with George Newman, and Jim Anderson.  Frankie recorded commercials for the Denver market including Frontier Airlines, Elitches Amusement Park, and “King of the Row” – a commercial which Frankie sites as gaining the attention which led to his time in Las Vegas.

The band also performed at “The Rocky Mountain Express”. 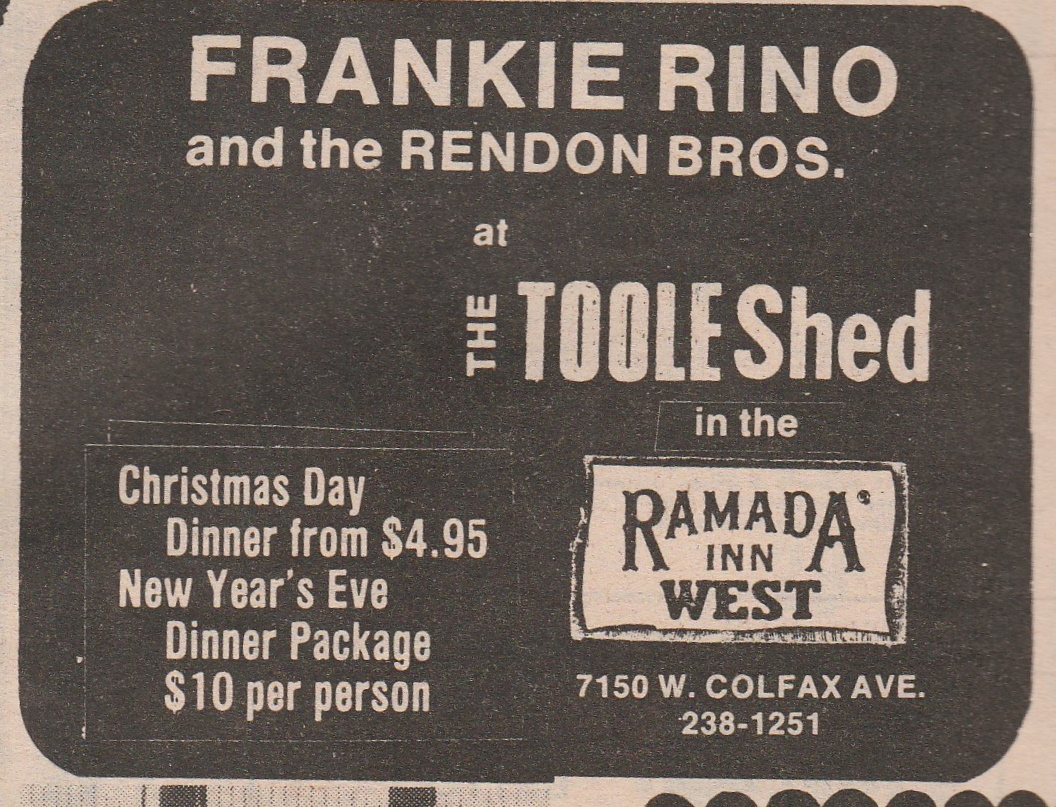 Then in 1972 Frankie landed a five-week engagement at the famous “Stardust” in Las Vegas.  That followed with a booking at Lake Tahoe’s “Sahara” , Nevada – and then an appearance on the Merv Griffin Show on November 1st of 1972, aired on ABC TV nationally and shown on Denver’s KBTV Channel 9 introduced by celebrity Danny Thomas who saw Frankie while appearing at the Stardust.

Frankie and the Rendons remained in the desert glitz Capitol for 3 years.   During that time he would meet and befriend many performing celebrities including Frank Sinatra and Frank Sinatra, Jr., Don Costa, Tony Bennett and many more.  And during his stint in Nevada he became close friends with Phyllis McGuire of the famous McGuire Sisters, often invited to visit at he Las Vegas residence.  He journeyed to Los Angeles during this time and made an appearance in conjunction with Johnny Rivers at the happening “Whiskey A-Go-Go”.  ???? 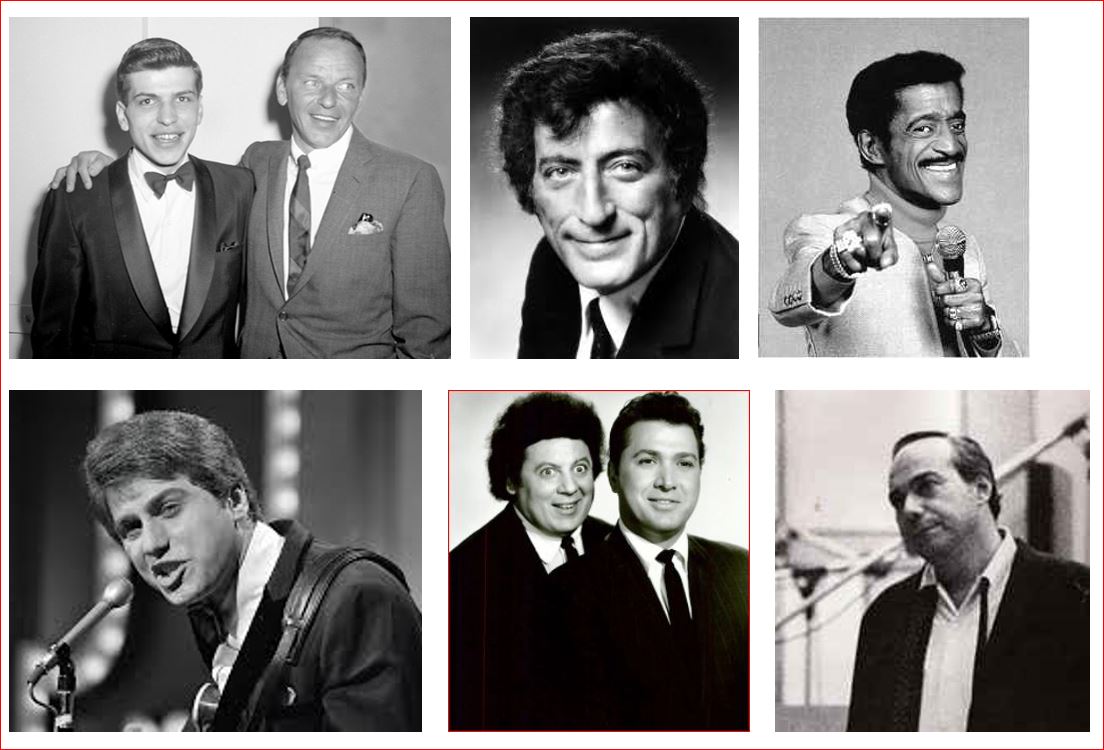 The Rinos with Frank Sinatra Jr.

Frank and Eloise in Las Vegas with Frank Jr. for Sinatra Concert 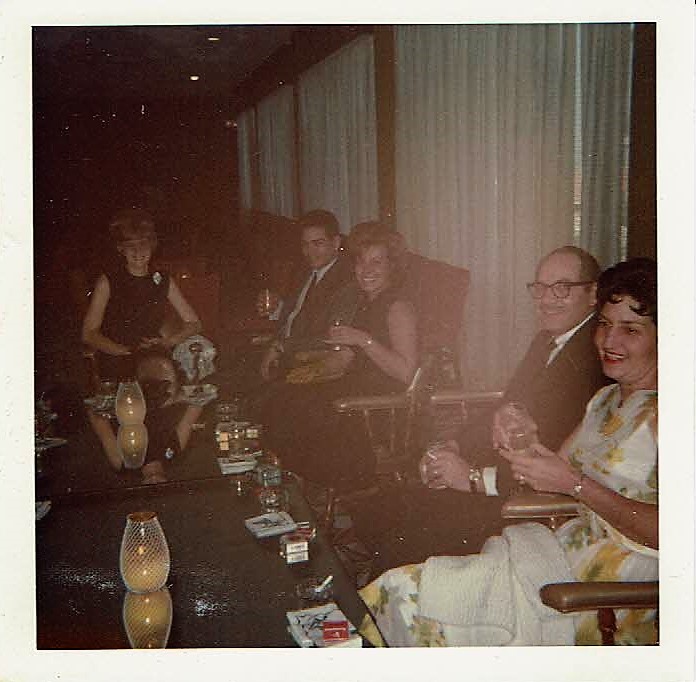 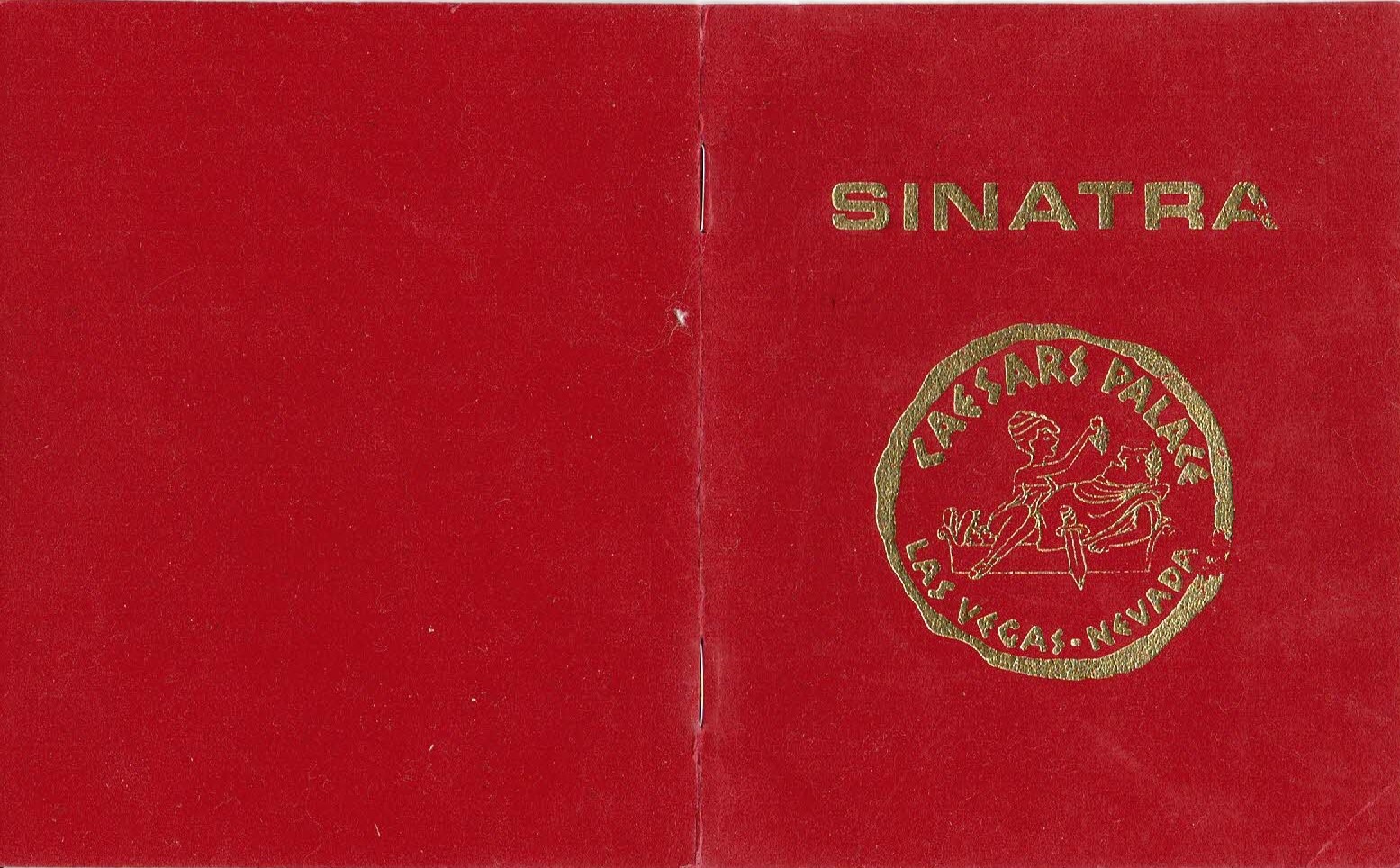 While performing at the Stardust members of the audience included MGM Records executives – a label which would record Frankie in and release a single in the summer of 1973. 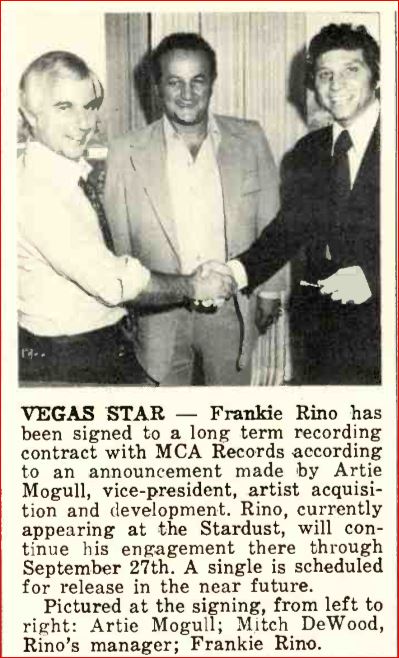 With Frankie returning to Denver where he became first an officer on the Denver Police force and then a detective, where he remained for 34 years.  As a Denver Police officer Frankie continued is career as a singer and entertainer and often made public relations appearances around the Denver metropolitan area to local high schools on behalf of the Police.

Frankie found himself on a fast track in the Denver adult nightclub scene appearing at many venues – and and along with the Rendon Brothers becoming regulars at La Place Pigalle.  Following are many of the lounges and venues where Frankie appeared both prior – during and after his stints in Las Vegas and Lake Tahoe. 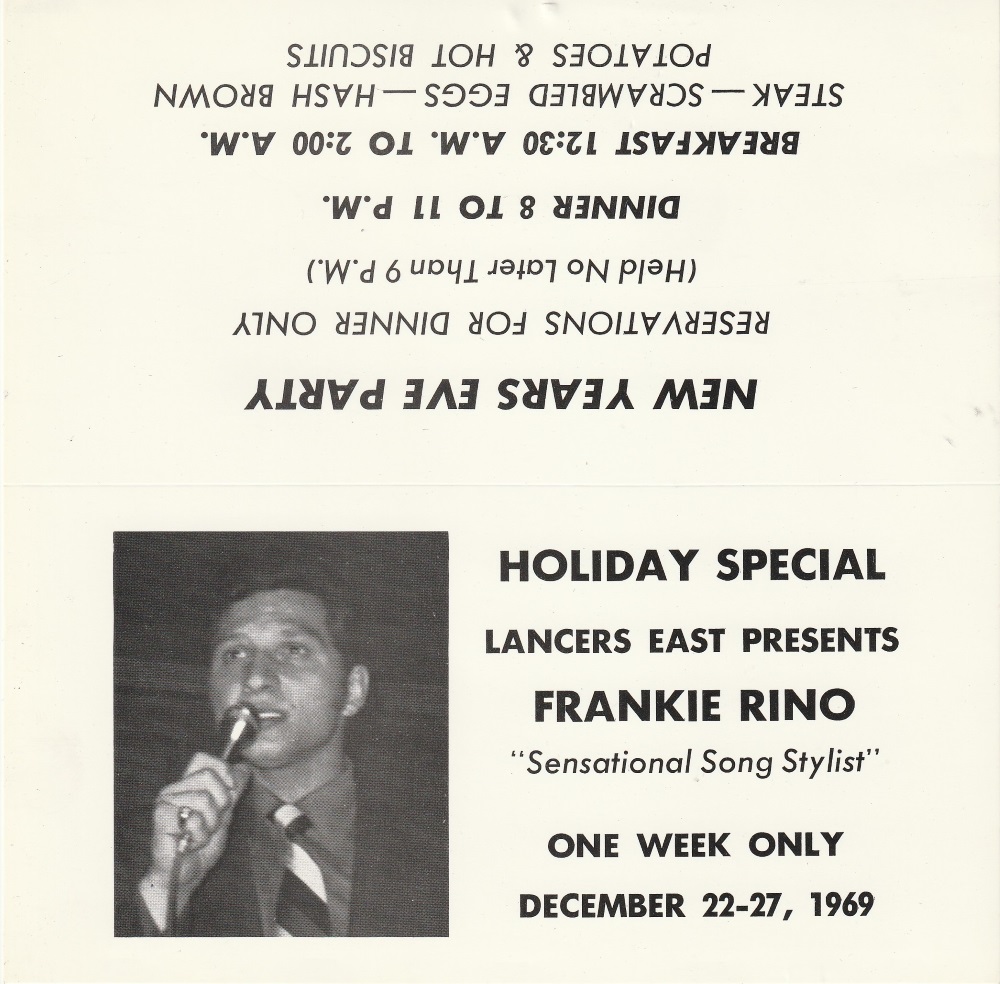 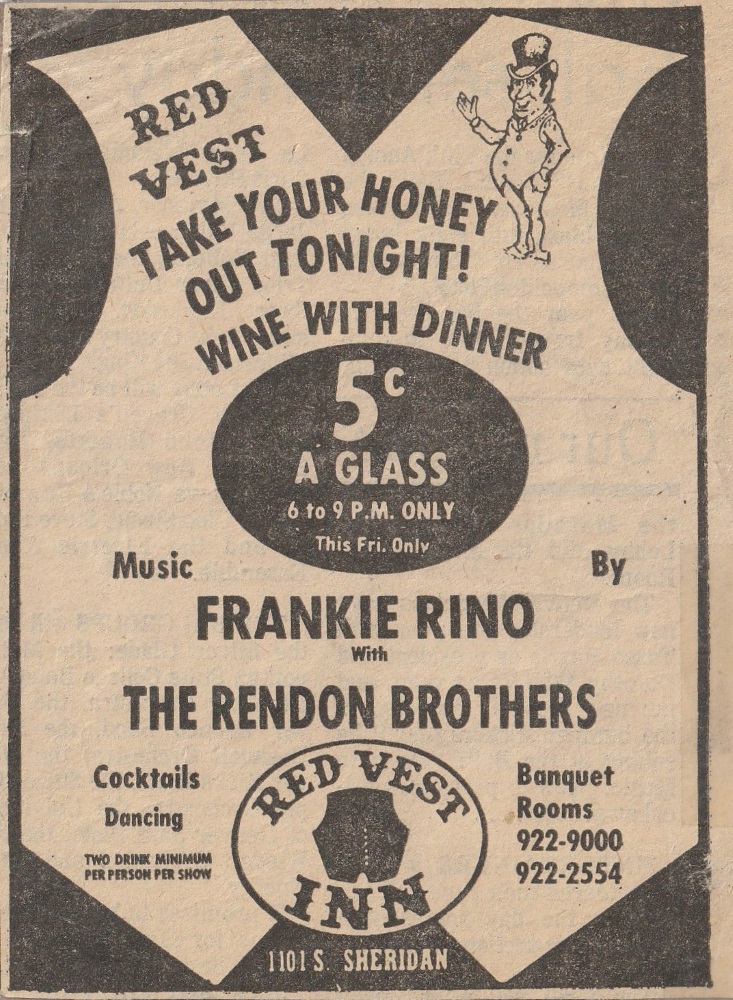 Thieves Market at the Regency 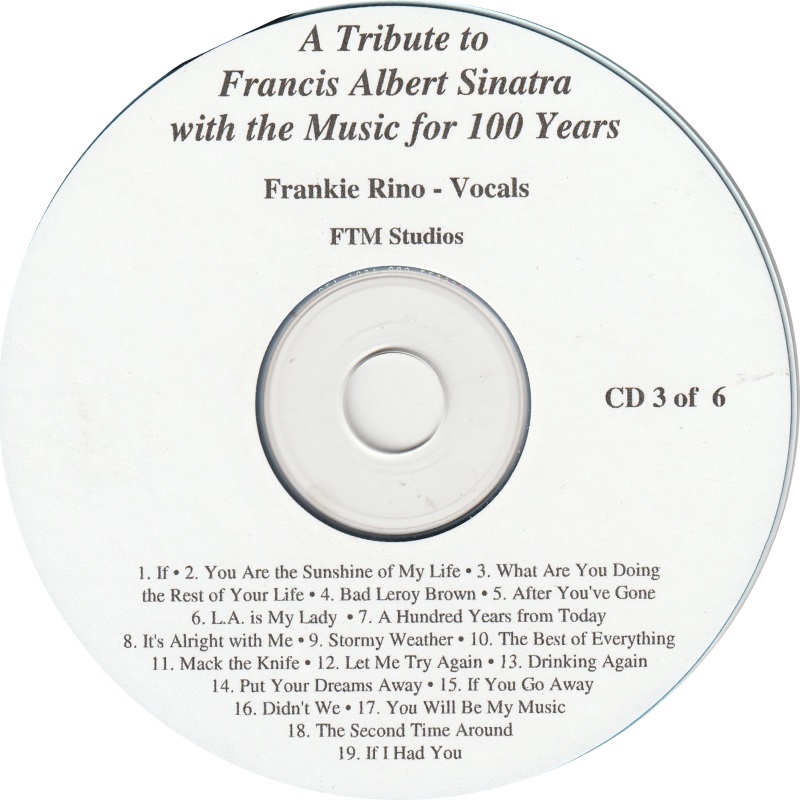 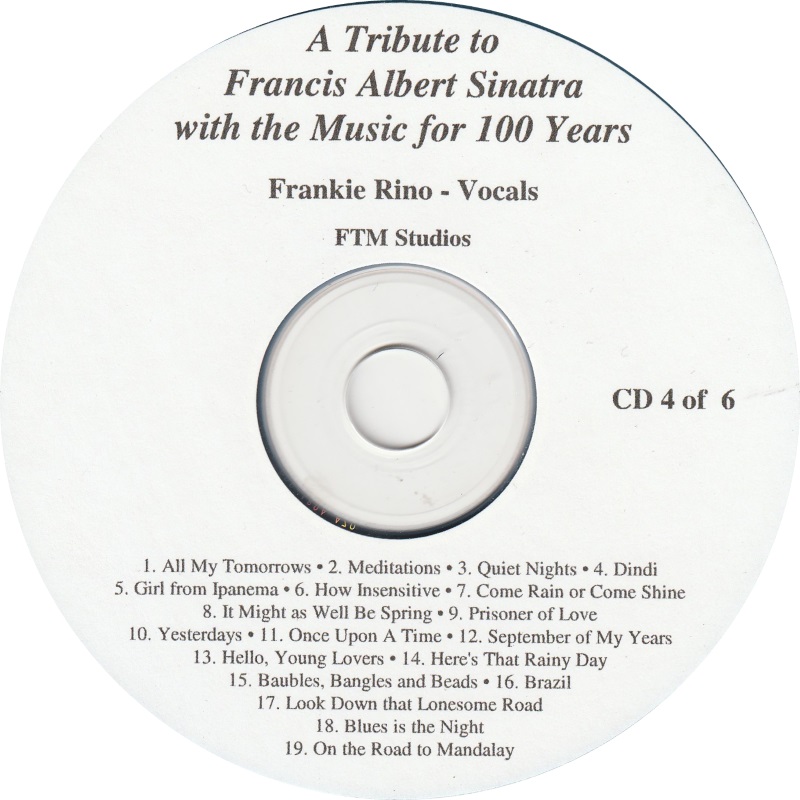 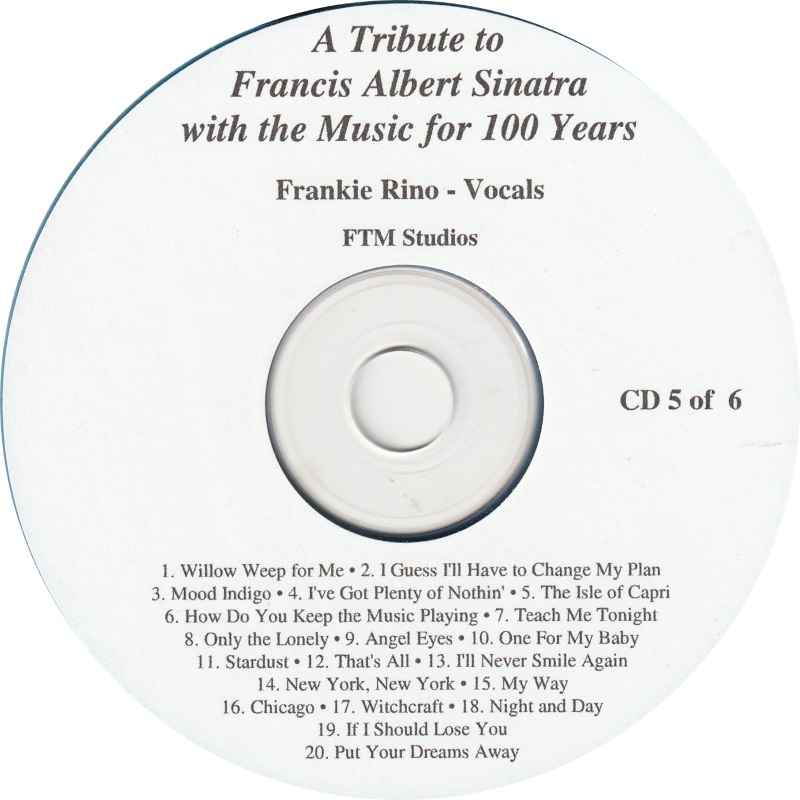 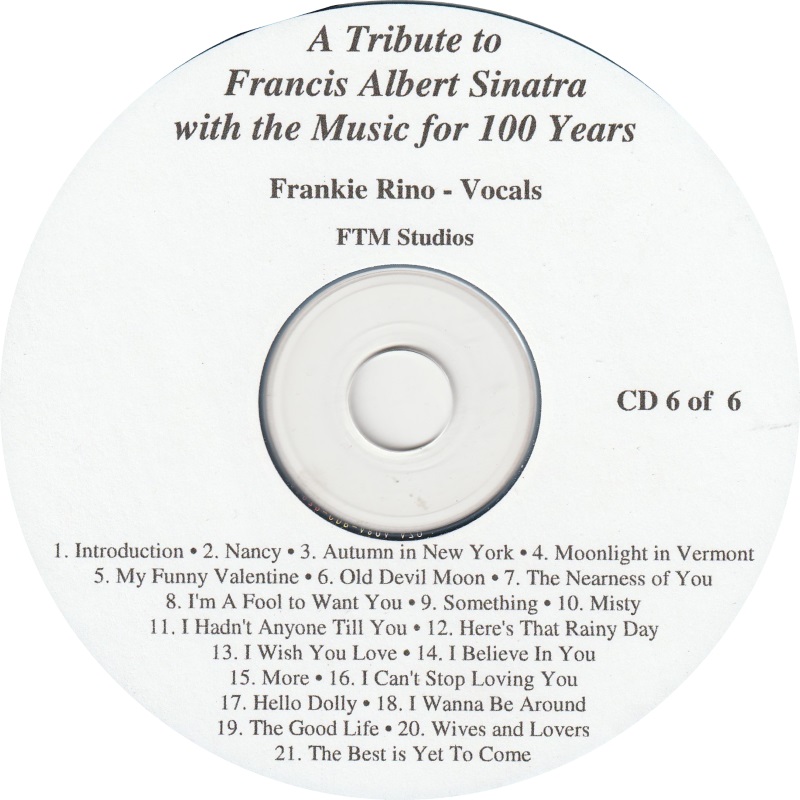