(Part of the Story)

(The following is based on my recent reading of the book “Little Labels – Big Sound” by Rick Kennedy and Randy McNutz, first published in 1999.  It is 180 pages-plus of some of the best music history I have had the pleasure to read.  Kennedy and McNutz, beyond being writers are both involved in music – Kennedy a jazz piano musician, and McNutz a record producer.

The following tale/review is only a taste of what the two writers bestow upon us.  Get a copy.  Place it on your beside table.  And at the end of the day, take a nostalgic journey back to where most of us have never ventured before.  What a treat! 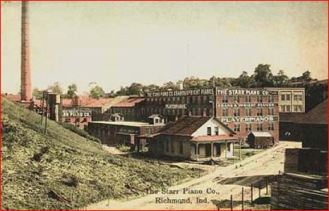 The Gannett Record label story begins in 1872 when brothers Benjamin and James Starr – working out of Richmond, Indiana launched Starr Piano – a company which would rise near the top of piano manufacturers.  In the early 1900’s the company was producing pianos at the rate of about 15,000 each year.

Then in 1893, the brothers Starr would take on a new part-owner – Henry Gannett who migrated out of Tennessee with family in tow to Richmond.  Gannett didn’t arrive in Richmond in tattered rags.  His wife, Alice, was well founded coming from considerable wealth.

Ten years into his coming on with the Starr brothers, Henry obtained controlling interest in Starr Piano.  By this time, Henry had brought his three sons into the business, Harry, Clarence and most importantly for the telling of this tale, Fred Gannett (the three not to be confused with the Alvin, Simon and Theodore of my earlier Post).

None of the Gannetts were particularly enamored with music (although mother Alice was a strong supporter of the local entertainment arts).  But they were savvy and driven music men, and so in 1915 they entered into a business which was seemingly off limits: phonograph records and phonographs.

Fred Gannett was not especially versed in musical knowledge.  And beyond that, he wasn’t particularly enamored by  any form of music – and especially not jazz – which, at the time of the Gannet patent victory, was in its micro infancy.  But Fred Gannett was the right guy, in the right place, at the right time.   Fred was 36 years old at the time and, according to Kennedy/McNutz was “attracted to the latest fads” and this attraction “drove the family back at Starr half crazy”.

Although not a patron of jazz, he was observant of fads and trends, and his exposure to what was happening around him would point toward a new path leading to a major breakthrough in music.

The Big Three – Pushing Back

Now backing up a little, it must be established that at that distant time in America, the phonograph/record industry was firmly in the grips of three mega companies – Victor, Columbia and Edison – a far cry from a future time when between 1948 and 1954, according to Kennedy and McNutt, nearly 1,000 new and independent labels started up.

And so the message to the Gannetts was clear ‘you don’t pull the mask off the old lone ranger and you don’t mess around with Victor’.

Starr began producing what is called “vertical-cut” records – a much inferior process to “horizontal-cut” which was a patented process controlled by Victor.  Also, retail outlets were reluctant to pick up the Starr recordings (which at the time were a mish mash of genres; religious, spoken word, poems, announcements, you name it).

So Henry and sons made a couple of changes.  First was a new company name – “Gannett” to minimize the “Starr” association.  Second – they made the bold move – switching over to ‘horizontal-cut’ recordings!

HORRORS!  The Gannetts were challenging the Big Three!  And so Victor did what any respectable monopoly would do – they sued.  The Gannetts thought ‘what the heck’ and marched on into court with the intimidating giant.

The result?  The court battle began in 1919 – and then in 1922 a verdict was handed down.  Big bad old Victor did ‘invent” the horizontal-cut technology.  The process was thrown into the public domain and Gannett was soon to become a contender.  (Gannett, by the way, represented several other mall record manufacturers in their court battle – sticking with their fellow travelers).

But topping Fred’s vivid imagination was father Henry’s intuitive business sense.  Fred was given the go-ahead to guide the family into the wonderful world of Records!.  So there was the matter of a recording studio (upstairs at the Richmond piano production facility)

From Way Down Yonder

In 1917 something surfaced that no one had ever experienced in the United States.  From out of the city of New Orleans emerged a combo called “The Original Dixieland Jazz Band”.  The group would venture out of their home turf in the South where a new genre was being put into play – “jazz”.  The group traveled North to New York City, the group would record what would be regarded as the very first jazz tracks.

Then there would be two more game changing events.  First, in 1922, Gennett would record an eight-piece combo called “The New Orleans Rhythm Kings”.

Next, in 1923 in Chicago, a wildly popular combo called  “King Oliver’s Creole Jazz Band”, would travel down to Richmond to record at the Gennett studio.  The group had never been in a recording studio before and the first time was indeed a challenge.  Twenty-eight takes later they had laid down their first track for Gennett.

The group was very accomplished as a whole, but none of the members more so than their second cornetist – a then unknown Louis Armstrong!

The new jazz flourished at Gennett for a rather simple reason.  Fred Gennett and company didn’t load up their recording studio with experienced music production staff.  Instead, employees from the floor of Starr Piano manned the operation.  These employees only concerned themselves with the physical product – the record – and getting it finalized and out the door.

The musicians, who found the studio rather primitive and wanting for technology, relished the complete artistic freedom that was theirs for the taking.  And the results were dramatic.  Many musicians would pass through the studio over the next decade or so delivering what would come to be known as some of the purest, and most artistically accomplished jazz known to the music world!

And What Would Become the Fate of Gennett?

The Great Depression took a toll on Gennett when record production in the U.S. plummeted dramatically, which was followed by the restrictions placed on industries everywhere with the outbreak of World War II.  By the late 1940’s the label was a mere ghost of its former self and by 1948 – the fabled Gennett was no more.

For the full story – it is time to run out and obtain a copy of “Little Labels – Big Sound”.  Beyond the opening chapter on Gennett, Kennedy and McNutz delight us with tales of the Paramount, Dial, King, Duke-Peacock, Sun, Riverside, Ace, Monument and Delmark record labels!

Following are a few more tidbits – as well as a selective graphic presentation of some of the artists who comprise the Gennett story.  This is followed by a partial listing of some of the greats of who passed through the Gennett studio and went on to jazz fame as selected by the “Gennett Walk of Fame” based in Richmond, Indiana.

Gennett with the KKK?

The Klan was highly organized – not only in the Southern States but elsewhere (including Colorado) back in the day.  Gennett Records put out a commissioned series of Klan records which would be pressed and sent in total to the Klan for distribution and fund raising.  The Gennett’s did not become involved with the KKK but there were some Starr Piano employees who were active.

Gennett pressed records for many labels and indulged in producing budget releases as well such as the Silvertone and Challenge labels shown above for Sears, Roebuck and Co.  These records would usually be sold three for a dollar.  Sears ran it’s own radio station out of Chicago as well.

It was a common practice back then for Gennett (and probably other record companies) to release records by their known artists but changing their names on the budget releases.  Gennett production workers would take names out of a phone book at random or simply make up some very silly monikers such as “Jack Fast and the Steppin’ Bell Hops” or “Skillet Dick and His Frying Pans”.  Often the actual artists were not even aware that their recordings were being produced in this manner.

(Brian McFadden – are you listening?)

(Click on the image below to visit the Riverwalk Jazz Collection)

Following are a selection of artists who passed through the Gennett recording studios and who have been inducted into the Walk of Fame located in Richmond, Indiana. 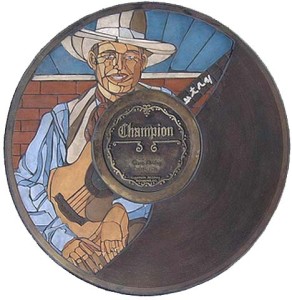 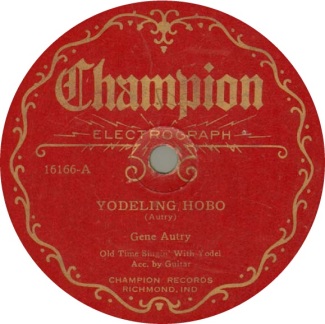 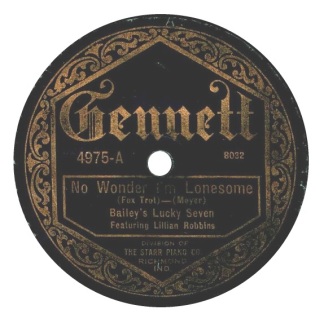 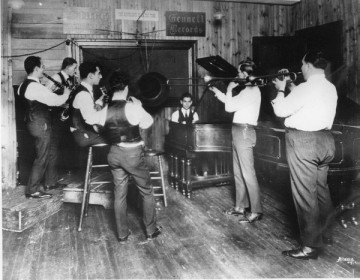 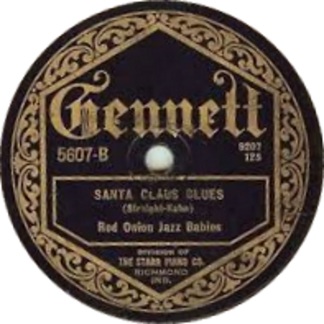 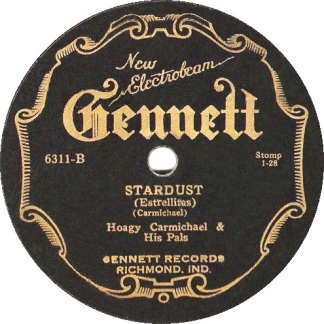 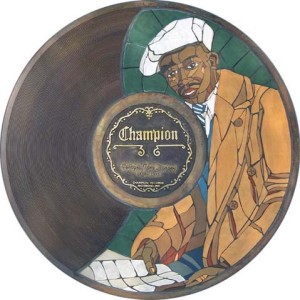 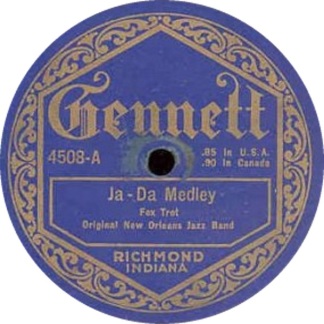 Coleman Hawkins with the Henderson Orchestra 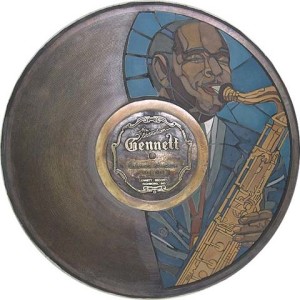 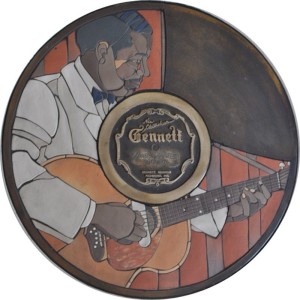 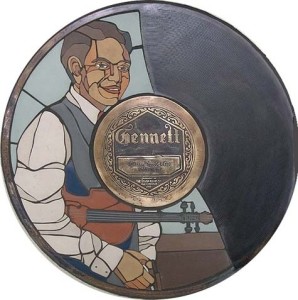 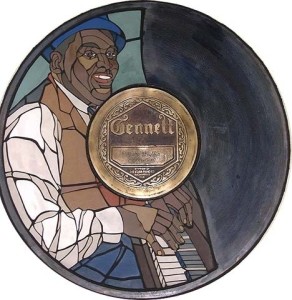 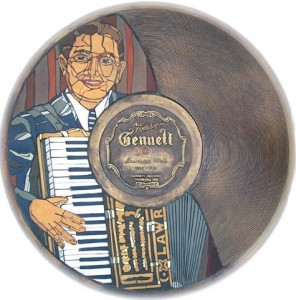 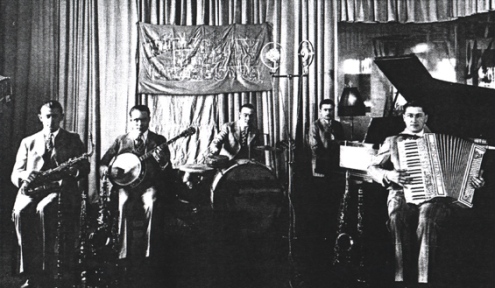