This past week my wife and made the trip out to Fort Morgan – once again to visit the one-time hometown of big band legend Glenn Miller.

(NOTE:  I have gleaned notes from a publication I obtained during my visit to the Museum titled “A Boy… A Golden Trombone.. and a Dream” by the late Tom Yates – a long time Fort Morgan resident and a dedicated Glenn Miller enthusiast and local historian.)

I had made this trip once before – a couple of years back – with no special purpose in mind other than to visit the Glenn Miller Museum which is housed in the town’s centrally located Library located on – appropriately enough – “Main Street” as all good small town libraries should be.  Coming into Fort Morgan is rather reminiscent of driving through parts of Nebraska and Iowa – with the vast number of corn fields lining the highway – Departing Fort Morgan – as we did – to the north on a series on long dirt roads is more reminiscent of good old Kansas.

Driving North out of Fort Morgan

This trip I had a slightly different purpose – to deliver my entire Glenn Miller long play and 45 rpm collection to the Glenn Miller Museum.  I never collected Miller’s vast output in 78 rpm format – There were just too darn many and my house basement simply wouldn’t accommodate that many of the old recordings.  (During Miller’s stint in the U.S. Army Air Corps his military version of the Glenn Miller band recorded 85 12-inch 78 rpm “V-Discs” alone!)

More than one source or locale likes to take credit for Alton Glenn Miller.  Glenn (actually spelled Glen at birth but never used again after becoming a band leader) was born in the town of Clarinda, Iowa.  The Miller’s remained in Iowa for a very short time. Today, of course, Clarinda – a town of about 5,400 residents, proudly boasts of being the “birth place of Glenn Miller”.

So after a few short years in Clarinda – the Miller family would move on to Nebraska to take a shot at ‘dry land farming’ – a risky endeavor at best.  Little Glen was only one year old at the time.  The family took up residence in a very small sod hut where they attempted to farm without access to irrigation water as well as raising a few animals.  They rode out the entire five years of a homestead grant.  Glenn’s father Elmer landed a job with the Rio Grande Railroad working mainly as on special construction projects along the railroad’s path.  Before long they moved out of the country and the sod hut to the town of Grant, Missouri where Glenn and his older brother Deane would attend elementary school right up to his high school age years.

Then in 1918, the Millers packed up once again – this time actually riding in a Rio Grande box car and headed for the town of Fort Morgan, Colorado.  Mr. Miller was offered a custodial job at Fort Morgan high school – a position he continued with until the end of his life.  Glenn was 14-years old when they arrived in town.

We had made arrangements to meet with the Fort Morgan Museum curator, Brian Mack.  After bringing in the boxes of Miller recordings, Brian (who was born in nearby Brush, Colorado) kindly gave me a short tour of the museum pointing out some of the Glenn Miller highlights.  The town museum is one of the more impressive and professionally arranged small town museums I have ever visited.  Surprisingly, the area designated for Glenn Miller is modest but informative  and expertly displayed.

Home of the Glenn Miller Museum (and much more)

Brian took me downstairs to a lower level where special displays are set up periodically for on a non-permanent basis.  It was there that I viewed a very early photo of Glenn Miller in his very first band – taken while he was enrolled in high school  – the “Mick-Miller Melody Five”.

In actuality the combo featured a female piano player – Alice Spencer – She would not appear in band photos due to her father’s religious views – and so Phil Layton would take her place during photo sessions.  Glenn spent most of his time in Fort Morgan with his brother practicing their instruments and perfecting their playing styles – but Miller did find time to play on the high school football team – and during his senior year in 1920 was selected to Colorado’s high school All State team – identified as the “best left end in Colorado”.

The Miller family was by no means wealthy and when I inquired from Brian the location of the “Glenn Miller House” I was told that the Millers had four different residences in Fort Morgan, all rentals.  Janet and I would make our way around town to view the homes – take a few pictures and get the lay of the land.  We learned that their first residence – located at 510 West Street – had long since been demolished making way for the town Safeway.  Show below are the three homes that stand today – none of them identified by any plaques or historical markers.

Glenn’s story beyond Fort Morgan is oft-told – first playing locally with Elmer Wells and his dance band (Wells being the inspiration for Glenn’s hit “Elmer’s Tune”.  Next, Glenn would head for Denver where he joined the Boyd Senter Band which appeared regularly at Denver’s Albany Hotel.  Then came Boulder, Colorado and a stint with Holly Moyer’s Canyon Park Band.  Around the same time, Glenn would enroll in the University of Colorado where he would study business and enroll in a music class – which he failed!  He didn’t hang around the Boulder campus long – moving onto the West Coast where he landed a job with MGM as a music arranger.

Then came Miller’s migration East Coast where he would come into contact with the famous band leaders of the day.  His first couple of attempts at putting together his own big band met with lukewarm results and at one point he nearly gave up.  He was always searching for a ‘special sound’ for his band but it was elusive until one day his lead trumpet player suffered an injured lip.  In a rather spontaneous move, Miller moved his clarinet player into the lead spot vacated by the trumpet – instructed a sax player to drop one octave and follow the clarinet and then have the remaining saxophones blend into a smooth harmony supporting the two.

The Glenn Miller “Sound” was found at last.  The band didn’t rise to immediate fame – and in fact broke up once again.  About a year later in 1939 in New York – he formed yet another band – and the outlook wasn’t good – not until a promoter named Cy Schribman stepped up to the plate announcing he liked what he was hearing and offered to bankroll Miller’s band.  That was that – and it was off to the races.  Miller had over two dozen number one songs and is rated by Music VF – He had over 130 hit recordings with 69 going Top Ten.

Music VF is a tallying organization as the 8th most successful recording artist of all time.  (Interestingly two other Colorado artists rank ahead of Glenn – with Billy Murray coming in at number 5 and Denver’s Paul Whiteman at number 3.  Rankings are tabulated based on recording success and the output of over 120,000 world wide recording artists.

Glenn’s sad end is well documented.  He perished most likely on December 14th, 1944 somewhere over the English Channel as has been best determined.  His missing aircraft and he along with pilot and co-pilot were never found – They were on their way to France where troops had just successfully entered the country after the Normandy Invasion.

Fort Morgan today is a bustling town but not overly so.  During our couple of hours in town we were drawn to music being played – jazz melodies – not sure where it was coming from.  It seemed to come from somewhere in the park adjacent to the Library/Museum – but then upon riding our bikes along main street – the melodies persisted – We then discovered that the Fort Morgan fathers have installed audio speakers at each intersection along main – not for special events -but for the ongoing pleasure of citizens and visitors – And yes, the Museum staff assured me – quite often the sounds emitted from the sound system was that of the great Glenn Miller Orchestra. 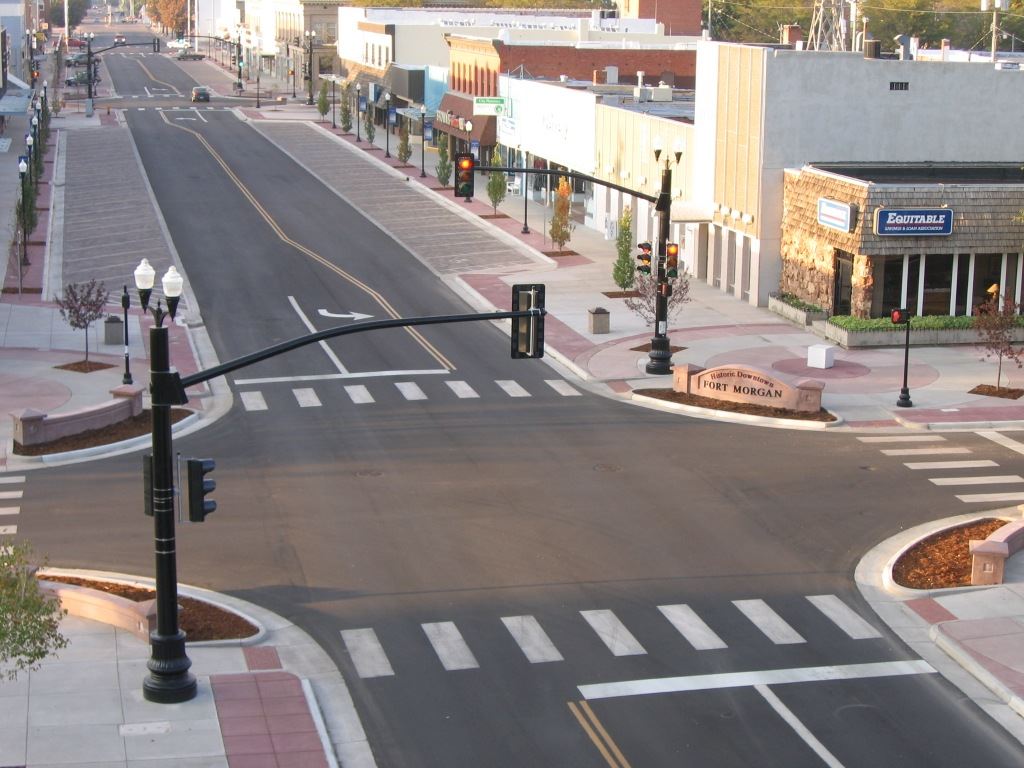