I always wished that Jimmy Jones had more songs which reached the airwaves here in Denver, Colorado back in the late 1950’s and into the 1960’s.  I loved listening to “Handy Man” and “Good Timin'” early on a Sunday morning when I was folding Denver Post newspapers for my Sunday morning run – listening to my small transistor radio in my parent’s garage.

“Handy Man” was the first record to break for Jones in 1959 and would to to number 2.  That was followed a few months later in the Spring of 1960 when “Good Timin'” nearly matched his first hit – going to number 3.  Then the excitement of his first two tracks waned and he only managed a number 83 showing with “That’s When I Cried”.

I loved the song – again featuring his great falsetto and range.

JImmy Jones was born on June 2nd, 1937 in Birmingham, Alabama James Jones.    He started off in the entertainment world as a tap dancer and in 1954 joined a very early doo-wop group called “The Berliners”.  The group changed their name to “The Sparks of Rhythm” in 1955.  “Handy Man” was co-written by Jones,  Interestingly the Sparks’ version featured the lead vocal of Andrew Barksdale.

Jones would leave the group and then – with the help of famed song writer Otis Blackwell, dusted off the song – spruced it up – added the whistling park by Blackwell and released the song on MGM Records’ subsidiary Cub.  Handy Man was nicely covered by both Del Shannon (exciting version) and James Taylor (mellow version) both very satisfying for me.

After his final hit on Cub – “I Told You So” (see ad above) – number 85 – Jones would move on to several labels – never again to dent the charts – including the R&B charts where he didn’t fair as well as the Pop charts.

“Good Timin'” was penned by Fred Tobias and Clint Ballard, Jr.  Tobias penned “Little Bitty Girl” for Bobby Rydell, “Johnnie Will” for Pat Boone and “Hello, This is Joanie” recorded by Paul Evans.  His “Born Too Late” is one of my favorites – recorded by “The Poni-Tails” in 1958 reaching number 7.  Clint Ballard, Jr’s claims to fame include his composition “The Game of Love” by England’s Mindbenders and “You’re No Good” recorded first by Betty Everett, then The Swinging Blue Jeans and later by Linda Ronstadt.

Ballard also has credits including “Ginger Bread” by Frankie Avalon, “I’m Alive” by The Hollies, “It’s Just a Little Bit Too Late” by Wayne Fontana & The Mindbenders, “Speak Her Name” by England’s David and Jonathan and many more. (Below: Fred Tobias and Clint Ballard, Jr. 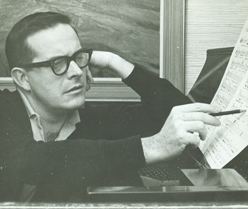