KIMN Bomb of the Week

From May 4th of 1959 up into the Spring of 1960 KIMN jocks or somebody – selected a “stinker” to feature weekly.  A few of the stinkers went onto chart both on KIMN and nationally.

Especially successful on KIMN was Homer and Jethro’s “Battle of Kookamonga” going all the way to number 2 on KIMN and number 14 on Billboard’s Hot 100 – their only appearance on the national singles chart.

The “Silhouettes” Rays – That song was first released on this XYZ label – XYZ continued to release additional songs by the Rays after their 1957 smash for three more years!

West coast label “Swingin'” Records had an impressive stable – but few hits – with Marvin Philips of “Marvin and Johnny” fame, Little Johnny Taylor and Floyd Dixon, Rochelle and the Candles and Sonny Knight

Composer Bobby Hammack also offered up the gems “Brazilian Hobo” and “Vienna Bongo”!  Hammack was Texas born and found his way to Los Angeles where he composed television scores for many programs including Red Skelton, Glen Campbell and Ed Sullivan.

Well, not surprisingly – The Renegades were yet another Hollywood studio musician assembly with future Beach Boy Bruce Johnston, Nick Venet, Sandy Nelson and Richard Podolor.  Nick Venet was responsible for signing the Beach Boys to the Capitol Records label – Entire blog posts could be devoted to Venet. McFadden was the force behind TV cartoon shows such as “Milton the Monster” and “The Thundercats” and others – He was also a featured voice character on the hugely popular long play “The First Family” by Vaughn Meader in 1962.

My parents purchased that record and it drove me nuts after two or three plays.

I’ve posted previously about this guy – none other than Ferlin Husky!

A dig a Martin Denny’s hit

Corn Pone duo Homer and Jethro made one appearance on the Billboard Hot 100 – and this was it – coming in at number 14 – They were Kenneth Bruns and Henry Haynes.

This was R&B singer Johnnie Morisette As though eating people were not enough….

The KIMN jocks bestow Big Jay with his second KIMN Bomb of the week!

Jerry wouldn’t get away with this one today – 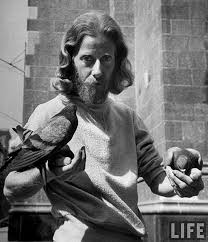 This one is a tuffy to find on the “Ditto” label

The KIMN Jocks were out of bands on this one

Same with this rocker by Seattle’s Frantics

Not a Jan and Dean parody

This was the final “KIMN Bomb Of The Week”