In the Spring of 1968, radio station KIMN president and general manager Kenneth Palmer authored an article in the April 6th, 1968 edition of Billboard Magazine titled “Top 40 Radio Is Gone”.

Starting off in typical Palmer style he states “In truth, “Top 40″ radio should never have existed. But it proliferated because it was the lazy man’s substitute for hard work in creatively programming a radio station.”

And with that – Mr. Palmer to break down the myth of “Top 40”. Among his proclamations:

Mild compared to his overriding definition “”Top 40″ began and ended as a jukebox with 40 records, a clock, a thermometer and a slot machine.” He continues “Frenetic deejays poured a sizzling burble of artificial enthusiasm through the mike while guttural newsmen rewrote dull wire copy into still duller Western Unionese that even the most intelligent listener could not understand.” (Wow)

Palmer knew his comments would create wonder in the minds of the Billboard readers when KIMN itself was probably considered the quintessential “Top 40” outlet in the Rocky Mountain Area.

“Name It And Claim It”

But according to Palmer, “We (KIMN) have never been and will never be a “Top 40″ station. The fact that we are in our 10th year of dominating a major market is an indication that we do something different.”

He proceeds to talk about the diverse range of widely popular promotions that were undertaken by KIMN. And to this he surprisingly exclaims “Frankly, we don’t know whether they are worth anything to us (other than to create some excitement within the context of our programming); and in any case, we never use a contest or promotion to hype ratings. It does not work.”

(Two full page ads from the Rocky Mountain News – promoting the promotions from July, 1970 and March of 1961 (courtesy of Bill O’Donnell)

Who is the Boss Here?

Regarding “Top 40” he continues “First: Please tell me who wrote the inviolable law that a radio station should play any specific number of records? If there is such a law, what number of records did it specify?”

Ken challenges the number and in fact challenges that songs chosen should be limited to 45 rpm discs. He boldly suggests including cuts from long plays with “… who was the god who decreed that the only hits recorded are on singles….. Shouldn’t we reject the concept that a contemporary station must play only singles?

“At KIMN we have always done so. The words “single” or “album” are not a part of our vocabulary. We talk about “hit performances”, and we don’t care where they come from.

I know that the FM stations were closing in on the market but I certainly don’t recall a time up into 1968 when KIMN ever featured any song on the air that didn’t come tidily wrapped in a 45 rpm sleeve. I may have missed something.

Palmer’s Decision: Throwing Caution to the Wind with Johnny Sea

Ken Palmer taking a ‘profit be damned’ stance in the Summer of 1966, boasted that KIMN would continue to spin the Johnny Sea social commentary 45 in spite of it’s long playing time. “A Day For Decision” was Johnny Sea’s 12 attempt at a charting hit record – coming in the Summer of 1966 – and peaking at number 36 in the nation. Sea would enjoy some modest success on the Country Charts but would never enter the Hot 100 again.

I noted previously in a Post that the only time I recall KIMN to assume a position in a social cause was when they ran an advertisement calling for the banning of bull fights in Colorado! I have no idea where these events took place but I vaguely recall – I think – that they may have even been broadcast live on Channel 2!

Below is a September, 1969 article announcing KIMN’s participation in a national radio-sponsored anti-drug campaign – KIMN was represented by Boss Jock Don West.

No Drugs for Don West

Will the Real KIMN Stand Up?

This article ran in Billboard in 1966 – and seems to solidify KIMN as a true-blue “Top 40” leader during that time.

One of the sad chapters in KIMN’s history – was this incident which occurred in the Fall of 1962 at the famed amphitheater in the foothills west of Denver.

Battles Along the Way

Back in 1963, KIMN competitor KDAB decided to flex some promotion muscle and announced a fund raiser featuring the Beach Boys in concert all funds from ticket sales going to charity.

KIMN countered – charity be damned – with a concert of it’s own on the exact same evening – featuring Bobby Vinton, The Cascades and The Astronauts.

KDAB quickly gave way changing the date from a Friday to a Wednesday night. KIMN would not sit still and scheduled a second concert featuring the Four Seasons to be held – yep! On the same Wednesday night. Some local program directors criticized the Tiger for it’s actions.

Then in the Spring of 1967 – after several years of putting up a good fight with KIMN – Denver radio KBTR gave up the goose – dropping their Hot 100 format in favor of ‘all-news’. Another one bites the dust!

KICN initially appeared to be the strongest challenge for KIMN – The two stations battled over the air – in the late 1950’s and it cost one KIMN boss jock his job when he “flushed KICN down the toilet” during a broadcast – using a chain as a sound effect. KICN would reorganize and become KBTR continuing it’s battle of the airwaves with Boss Radio KIMN 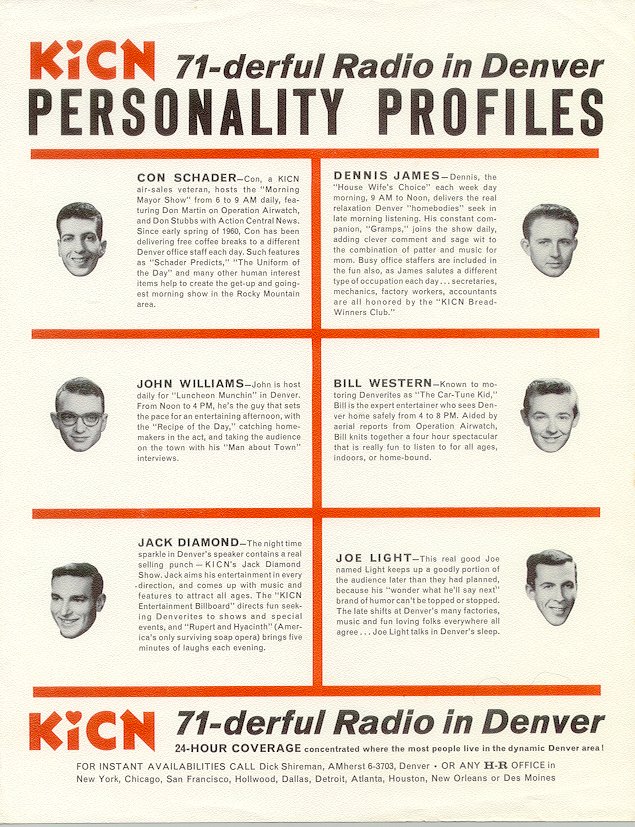 This jocks on this Denver station were game for a tassel with the Tiger – It had been around since the late 1940’s and turned to Top 40 during the late 1950’s first featuring a “Top 30” format and then expanding in the early 1960’s to “Top 40”. But KTLN most prominently left it’s mark in Denver radio by pioneering the “all-talk” format in 1965 – The station went nearly 100 percent talk but left jocks Ray Durkee and Tom Griffiths in place for ‘Top 40’ play. The station broke the Denver police scandal in the 60’s and perfected ‘live-at-the-scene’ coverage especially on the night beat.

(NOTE: Below Royce Johnson is shown as a member of the KTLN staff – the former KIMN Boss Jock who ‘flushed’ competitor KICN down the toilet.

Next he states “In short, “Top 40″ began as a dynamic new programming concept for radio but has failed to progress beyond its initial superficial and unbelievable facade of providing an artificial form of excitement.” I don’t think I ever met a KIMN contemporary listener who would ever have described good old KIMN in these terms. Palmer may have totally been excluding the Denver Tiger from his comments – but difficult to imagine the station didn’t fit the mold.

The entire article was obviously composed with an eye for KIMN’s survival . His final recommendations included:

Palmer summed up with these words, “We departed from the mainstream of “Top 40″ many years ago. But still have much to learn. I hope we will learn part of it with you.”

Ken Palmer sold KIMN in 1970 to an Atlanta concern. All the familiar names on the broadcasting side and news side were gone. KIMN was sold and sold again with little good result. By 1976 the Denver Tiger placed 15th in the Arbitron ratings with a mere 2.7 audience share – down from 56 percent in it’s hey day.

There was a minor resurgence before the final demise – The “Boogeyman” comes to mind – Steve Kelley gave it a whirl as did Randy Jay – there were others.

How many letters in the alphabet?

Well to my way of thinkin’ – there’s only four