Wikipedia: “A year after its incorporation on November 12, 1907, the Lakeside Amusement Park, nicknamed “White City”, opened on the eastern shores. Both town and park were founded by a syndicate led by prominent Denver brewer Adolph Zang, who endeavored to build the resort just across the county line from Denver, and incorporate to move beyond the reach of Denver liquor laws. Also in town on the southern shore is Lakeside Mall, built in 1956. The amusement park, shopping mall (the shopping mall was razed approximately in 2010 and a Wal-Mart now sits on the site), and lake occupy almost all the tiny municipality. Residences are limited to a handful of houses in the southeast corner of the town occupied by employees of the amusement park.”

Back in the beginning, Lakeside was one of many “White Cities” and was first opened in 1908.  “White City” refers simply to an architectural style of buildings from that early time period, part of which was the “white washing” of the building walls.

Lakeside’s musical past was rich with many big bands and musicians appearing at the El Patio Ballroom including Denver’s Paul Whiteman, Colorado’s Glenn Miller, a Lakeside regular Kay Kyser, Duke Ellington and others.  My great aunt (now deceased) danced there often and recalls that band members would actually be housed in the Lakeside tower which contained many small rooms at multiple levels.  I have never seen a corroboration of this story, but I don’t doubt it.   You can see the El Patio in the photo below encircled by the roller coaster (all wood roller coaster at that).  National roller coaster clubs come to Lakeside to view and ride the coaster which they rank as one of America’s very best vintage coasters.

As related to me by my mother, I remember my parents were out dancing at Lakeside in the 1940’s.  Afterwards they went into the “Fun House” where my not-so-coordinated mother tried her hand at the rotating barrels.  She not only fell but couldn’t get up and the ride’s operators had to enter the barrels (three attendants) and carried her out. Look at the third photo down and you can see the dreaded “barrels” off in the background).  The fun house by the way – known and loved throughout the 1950’s and 1960’s and beyond was not the original in the park.

“Laffing Sals’ voice track wore out in the 1960’s and was re-recorded at the Band Box studio.  I remember seeing the start of a knife fight there in the late 1950’s.  Very scary.  Park security was able to break it up before it became serious.

Almost all of these ride coupons reflect rides that were still up and running well into the 1970’s and in several instances – remain today.  The old indoor swimming pool was located just inside the front tower gate off to the left and remains today – drained and boarded up.  The adjacent one-block long community is actually an official town – “Lakeside” with about 8 citizens from what I have read.  When I was growing up I heard that adult residents would take turns being the town mayor.  Their homes are located just south of the Lakeside entrance, on Sheridan Blvd.  They have tiny front yards due to the close proximity of Sheridan’s lanes.

The Laughing Lady at the Fun House

This is a very early photo of the Fun House (long gone).  The Fun House was loaded with hazardous rides and challenges (some shown below).  The first horror as “The Laughing Lady” just barely visible lurching over the double stair entrance to the Fun House.  If you got by here you then had about a 1 in 10 chance of making it out of the Fun House without either suffering a broken bone, or a taking a pounding by the hoods who would pretty much hang out there all day.

Here is my daughter’s interpretation of the the original Laughing Lady with the actual voice track (which by the way was recorded at where else?  Band Box Studios!)

Coaster enthusiasts travel from afar today to view one of the last wooden classic coasters in America – Below is a shot from the 1950’s.  The Cyclone was and is today one of the premier and most nostalgic wooden roller coasters in the world.  The hoods would always grab the back two cars and then do really dumb things like almost standing up and always riding hands free.  A nerd didn’t dare try to sit in the two back cars – That could result in a beat down – and you didn’t sit in the third car from the end as well – if you didn’t want to be spit on. 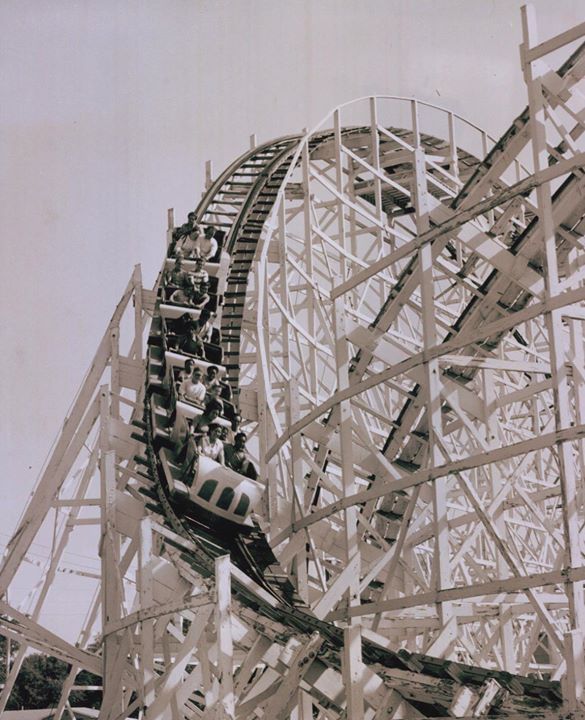 The thing I remember most about the Lakeside Speedway at Lakeside was the Sundway evening live television broadcasts from the track most likely on Denver’s Channel 2 (the networks wouldn’t have dared carry it).   My two favorite events were the “figure eight” races and the thrilling “demolition derby” where anything went in the way of targeted crashes – head on’s, t-bones – anything to be the last junker standing!

The grandstand barely remains standing to this day – grown over with weeds and even rogue trees, junk accumulated throughout, a ghost of a reminder of bygone days.  My daughter is certain that the Laughing Lady is tucked away somewhere in the debris of the old Speedway grounds.

A “Roundy” event at Lakeside Speedway

This ride evolved into “The Monkey Cage” in later years with a wire cage surrounding the riders closed in by a latched door.  It would spin and pin you to the wall and the idea was to reach for the center pole and pull yourself to it.  The tough guys would pretty much bash any nerds attempting to reach the center.  Sort of a “King of the Mountain” kinda thing.

This was the old “Pancake” ride in the Funhouse – The idea here was to rush into the ride and attempt to gain the center spot.  Everyone else would usually be hurled off out onto the perimeter – The hoods would pretty much shove any nerds right off the Pancake and never, never permit a nerd to occupy the center spot.

The Barrels in the Fun House were a Barrel of Fun – The hoods were able to wedge themselves onto the barrel interior and actually rotate around 360 degrees!  When a hood did this – it was forbidden to enter into the barrels….

The “Auto Skooter” appears quite tame back in the early days – Later it would become a full fledged “bumper car” ride with every man and woman for himself.  The hoods would seek out the weakest and thinnest riders – and the girls, and bash them head on even though it was “against the rules”.  The hoods were at least as tough as the punk running the ride – so they sort of left each other alone.

The Patio ballroom is where the Big Bands would play in the 40’s and 50’s – Some rock groups came later but the old Patio was closed down I believe in the early 1960’s.

The Lakeside Natarorium (who called it that?) was located right adjacent to the Lakeside Tower – Now boarded up but still there – This was another place where you had to watch out for the hoods.  If they didn’t get you in the dressing room with snapping towels then they were sure to do a “cannonball” splashing everyone including little kids – and then look for a nerd (me) to dunk).

The Whip, Staride, Miniature Railroad, Loop O Plane and Rocket Rides are all still with us today.  If you wanted to ride something completely confident that there would be absolutely no hoods on board – then it was the Miniature Railroad ride – one of the most boring and least thrilling rides ever devised.  I would often ride it 8 or 9 times or more when attending the park.  I have no idea what the “Devil’s Whirl” was.

Lakeside in the New Millennial

A few of the seven or eight homes of the community of “Lakewood” on Sheridan Blvd. today.

The “College Inn” is a long-time holdover from the early days of Lakeside – Today it features a memorabilia display case with surprisingly few artifacts from the past.