They Answered the Call!

The year was 1952 and the caller was Johnny Otis.  He needed to get in touch with a couple of young song writers with whom he was very familiar.

Johnny had just been approached by the owner of Peacock/Ace Records, Mr. Don Robey.   Don had signed Big Mama Thornton to his labels and approached Otis who had discovered and featured Thornton on his recordings and in his shows.  Big Mama needed a hit record.  Not just a local hit – That was manageable – A couple of Thornton singles had gained some air play around Los Angeles, but Robey was inpatient for something bigger – Robey wanted a hit record.

And so the two young song writers listened to Johnny’s request.  He asked them to cover over to his home around Central Avenue near Watts to meet the none-too-shy Big Mama Thornton.  The composers were Mike Stoller and Jerry Leiber.  Otis was very familiar with a couple of their early efforts – “Hard Times” which was recorded by R&B star Charles Brown – a song he took to number 7 on the “race” music charts in early 1952.  Then there was a nice little ditty recorded by Little Willie Littlefield called “K.C. Lovin'” also composed in 1952. (Littlefield was another Otis protege.)

That song had been a point of discussion and disagreement between the two 18-year-old song writers with Mike (the song writing member of the team) and Jerry (lyrics) engaging in a huge disagreement on the direction for “K.C. Loving'”.  Mike wanted the song to coast along with a nice melody.  Jerry was determined to keep it funky and hard-core blues.

Mike won out when he reminded Jerry that it was he who composed the music!  The song gained good air play around Los Angeles released on Federal Records but didn’t break nationally.  The original title of the song was “Kansas City” but it was released with a revised title which record producers thought hipper and more with the R&B crowd ‘K.C. Lovin'” (the song actually came out as “K.C. Loving”.)

Notice the last name spellings – Didn’t always get it right!

Back to Kansas City

Skipping ahead, singer Wilbert Harrison would remember the 1952 recording and decided to dust it off in 1959 – electing to return the title to the original
Kansas City”.  His choice was a good one.  The song would soar into the Top Twenty, landing at number 1 for two weeks and selling a million copies.  Over 200 versions of “Kansas City” were thereafter recorded.

So back to the meeting with Johnny Otis and Big Mama Thornton.  Big Mama demonstrated her belting style for the two now-19 year-old’s and to say the least they were blown away.  So the next step was to get Big Mama a hit.  Otis asked the pair what they might have for her.  They answered that they simply hadn’t written her hit yet but would – and in fact, would do it that every day.

They returned to the home of Mike Stoller’s parents where he was still living, got down to business, and then promptly returned to the waiting Otis and Thornton.  After her first attempt at the new song.  Leiber interrupted her during her first take, requesting that she not treat the song as a gentle ballad.  Thornton didn’t take kindly to the 19-year old’s suggestion.  Next, Johnny Otis decided to step in, asking Jerry to sing the song as he imagined it for Big Mama.  Needless to say Big Mama was not going to be impressed, being ‘schooled’ by this teenage white boy’s attempt at genuine rhythm and blues.

Startlingly, after just a few moments, a light bulb illuminated over Big Mama Thornton.  She took it from there – and the rock classic “Hound Dog” was born.  The song entered the R&B charts in March of 1953.  It climbed to the top remaining there for seven incredible weeks.  It would be Thornton’s only charting song!

Leiber and Stoller were on their way and ready for national fame.  Things got a kick start when their “Black Denim Trousers and Motorcycle Boots” reached number 6 in 1955 (The Cheers’ “Bazoom (I Need Your Lovin’)” would hold the distinction of becoming Leiber and Stoller’s very first record to chart on Billboard’s top 100, reaching number 15 in the fall of 1954, nearly a full year ahead of “Black Denim Trousers”).  The Cheers were an unlikely choice for two aspiring RnB composers – far from being rockers let alone blues singers – they were strictly a pop trio comprised of Bert Convy, Gil Garfield and Sue Allen.

Convy later became a TV host of several day-time game shows.  “Bazoom” and “Black Denim Trousers” are both credited with being among the earliest ‘rock and roll’ songs to chart in the Top Twenty – sort of odd – especially listening to the musical background of “Black Denim Trouser” provided by Ray Anthony’s Orchestra!  Neither song entered the R&B charts.

That was followed quickly with hit recordings by The Robins (who became The Coasters), Ruth Brown, Big Joe Turner and The Drifters.  There would of course be many, many more.

Now Back to that Old Hound Dog!

In a rather odd-twist leading to fame, the King of rock and roll – Elvis, first heard “Hound Dog” in 1955 being performed live in Las Vegas by an early group of sort-of-rockers, Freddie Bell and The Bell Boys.

He liked what he heard and so recorded the song for the “B” side of his 1956 hit, “Don’t Be Cruel”.  DJ’s loved it and so Billboard charted both sides together – both reaching number 1 in the nation remaining in the top spot for 11 weeks, becoming Presley’s biggest two hits ever!  Leiber and Stoller had truly arrived!  (Note:  Someone at RCA changed the lyrics to “Hound Dog” much to chagrin of the songwriters.  They complained that the song was not remotely about a dog in any way but about a scoundrel-unfaithful boyfriend.

But there was more to come.  Carefully guarded and catered to Elvis loved what Leiber and Stoller were turning out. (His manager, Colonel Parker, had different feelings about the pair – He didn’t trust them.)

Leiber and Stoller had followed “Hound Dog” with another offering titled “Love Me”.  They were surprised when it was accepted and probably more so when it rose to the number two position on the Billboard Charts in late 1956.

So the stage was set one of my favorite Leiber and Stoller stories:  Elvis’ publisher Jean Aberbach approached Mike and Jerry – now in their very early 20’s – with an interesting challenge:  He wanted some hit songs for an upcoming Presley motion picture.  The pair was very excited by the prospect of composing for the big screen, but not so excited to immediately respond to the request.  They were new in New York – having come there to meet with the Altantic Record executives, and they were having a ball making the rounds to see the sights and enjoy Broadway.

While resting in their Manhattan hotel room, enjoying a luxurious breakfast.  A sudden knock came pounding on the the door to their suite.  It was an exasperated Aberbach who demanded to know where his requested songs were.  He was told not to worry – they were coming soon.

That didn’t quite cut it with Aberbach.  He responded that he knew they were coming soon – in fact – very soon.  And with that Aberbach shoved the living room sofa against the entryway door, blocking any exit.  He then threw himself down on said sofa and fell asleep.

Without any other choice – Leiber and Stoller scooted together two sofa chairs and went to work.  About five hours later they shook Aberbach awake and he immediately asked for his songs.  “Here they are” the duo responded. 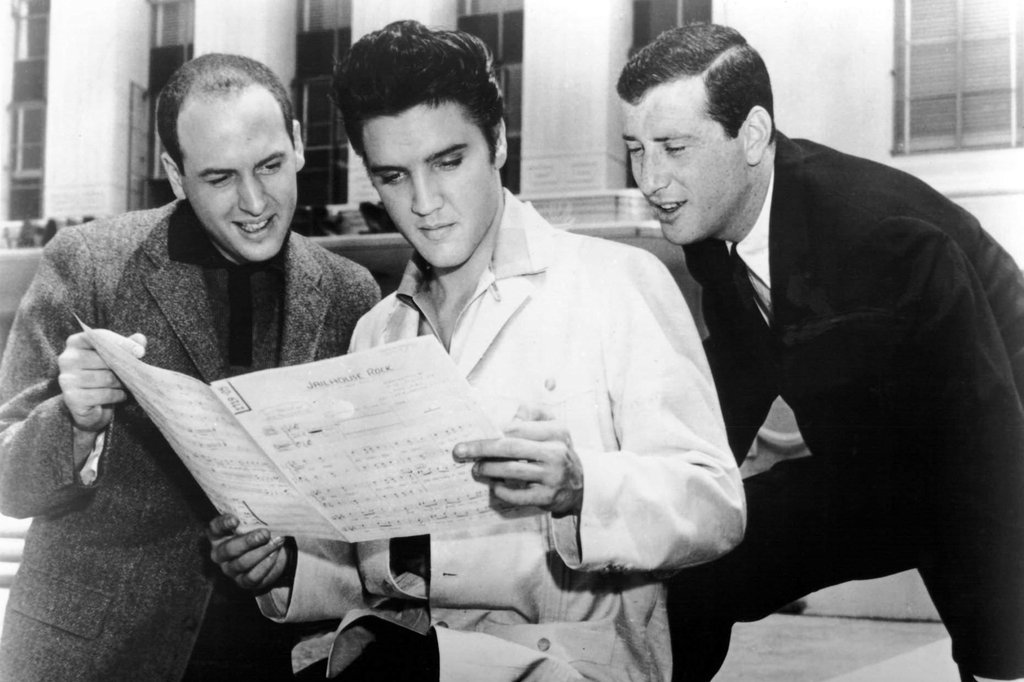 The Colonel never accepted Mike and Jerry, always keeping them at arm’s length or down right banning them from the Presley inner circle.  His final play was to demand that he take over management of Leiber and Stoller.  They loved Elvis, but they cherished their independence even more – and so they sent the Colonel packing.

The Parker-Presley alliance would eventually dissolved after many years.  Parker would pass away in 1997 in Las Vegas at age 87.

Jerry Leiber bid us farewell in August of 2011 at age 78 passing from a worn-out heart.  And the world would be left to reflect “Is That All There Is?…….”