Liberty Records started off  in 1955 founded by Simon Waronker, along with Theodore Keep and Al Bennett.

Waronker had worked with 20th Century Fox providing music for the company’s motion pictures.  He departed 20th Century to start up his own record label, Liberty.

Al Bennet was first employed by Dot Records before coming to Liberty, where he served for several years up until 1968 as president.  Theodore Keep.  He closely associated himself as a production assistant with David Seville working with Seville on the voice techniques used first on “The Witch Doctor” and then the tremendously successful Chipmunks – an act which literally kept Liberty afloat in the early years when the label was facing bankruptcy.

Chippies to the Rescue!

From Liberty he moved on to work in television and motion pictures bringing with him his audio and engineering expertise.  As a tip of the hat to the Liberty executives, the Chipmunks took on the names “Simon, Alvin and Theodore”.  How cute!

Liberty kicked off the label’s quest for success with Julie London from England, who scored a number 9 hit with “Cry Me a River”.  Another big boost came from a sister act, “Patience and Prudence” (the McIntyre sisters) who landed a million selling single “Tonight You Belong to Me” (#4 Billboard, 1959.  They came from a family music background, with father Mark McIntrye who fronted his own orchestra and had worked earlier on with Frank Sinatra. 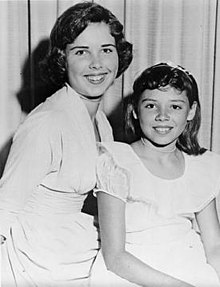 The sisters followed up with another biggie, “Gonna Get Along Without Ya Now” which topped out at number 11.  Neither sister had real designs on a career in music – and after a short spell recording for Chattahoochie Records, they walked away from show business.  They were just so darn cute!

Other major Liberty artists included Jan and Dean, Gene McDaniels, Johnny Burnette, Timy Yuro and Gary Lewis and the Playboys, all catering to the teen crowd – The a big boost came along in the form of Jan and Dean.

Liberty’s  first true “rocker” was Eddie Cochran (perhaps their only true rocker).  Cochran released 14 singles on the label – two posthumously after his tragic car accident and death on April 17th, 1960 in Somerset England at the very young age of 21.

Along came the 1960’s and the label landed their own “Bobby” – Bobby Vee who had a contract with Loma Records (along with his backing group “The Shadows”).  Vee enjoyed a long string of hit records with Liberty from 1959 starting off with “Suzie Baby” (his only Liberty single with The Shadows), and ending in late 1970 with “Sweet Sweetheart”.

Bobby was diagnosed with the dreaded Alzheimer’s disease in 2001 and passed away on October 24th, 2016 at the age of 73.

and from their it was a bouncing ball  of owners and labels – with lots of subsidiaries formed, catalogs switching hands and so on.  In 1980 – after many changes and dealings – Liberty was revived by EMI using the label to reissue it’s old catalog along with Imperial’s catalog.

By 1994 Jimmy Bowen had become president and then the label folded again in 1995.  The catalog – of course – survives – owned today by Universal Music – an arm of Capitol Records.

Give me the good old Liberty from the early and mid 1960’s – with all it’s teen pop and fun songs!  You can have the rest.