Short Shorts – Short Journeys through our Musical Past

Have You Heard the News? 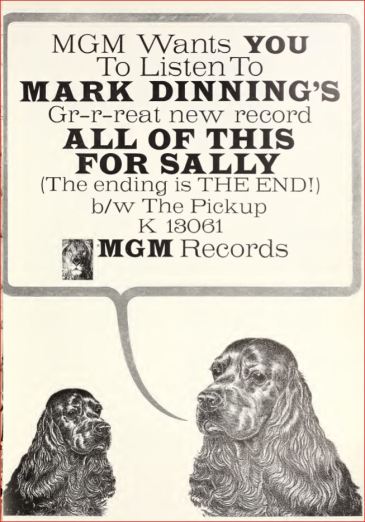 This in from Jerry Richards former record store owner in Colorado Springs:

Mark spent some time with me in one of my record shops in col springs in the early 80s, just before he passed away. he picked up a les paul gold top i had and sang teen angel for us, i will never forget that. we discussed many things including the 2 different versions of “top 40, news, weathe,r ans sports”.

Mark Dinning will always be remembered (by many of us) for his ‘teen tragedy’ song “Teen Angel” a plaintiff ballad from 1959 – If only his girlfriend had not gone “running back”…..

Mark Dinning was born on August 17th, 1933 in Oklahoma.  His family migrated from Kansas to a farm in Tennessee.  It would be in Nashville where he would seek out a career singing country music – much as a few of his sisters were doing.  It was one of his sisters, Jean Dinning (Surrey), along with her husband Red Surrey, who composed “Teen Angel” for Mark.

Jean was a member of the trio called “The Dinning Sisters” joined by her siblings Lou Dinning and Ginger Dinning.  They cut many singles from 1947 into 1955 recording for Capitol, Decca, and Essex.

They managed four chart hits – all in the 1940’s  with their biggest hit being “Buttons and Bows” at number 5 in 1948.  They started off on the NBC radio show “Barn Dance” and attracted the attention of Capitol Records who signed them in hopes of landing an “Andrews Sisters” type act.  They also appeared in a couple of motion pictures “Texas Jamboree” in 1946 and “Throw a Saddle On a Star” the same year.

Lou Dinning released many solo recordings with Capitol but did not manage to chart. 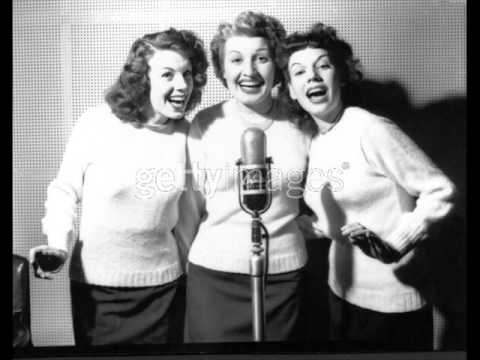 “Teen Angel” was not his first attempt at a hit record.  Five would proceed it on the MGM label – with several tracks composed by Mark – and several others by the composing team of Felice and Boudleaux Bryant – who wrote many hits for the Everly Brothers in their early career.  Teen Angel achieved the ultimate position on the charts – number 1 – and it proved to be a very difficult act to follow for the young singer.

He would chart in the Hot 100 three additional times – never again reaching anything approaching the upper regions of the pop charts.  (A Star is Born – number 68; The Lovin’ Touch – number 84; and Top Forty, News, Weather and Sports” a big of a novelty composed by John Laudermilk.  His sister again contributed with “A Star is Born”.  Dinning would manage to place a handful of tracks on the “Bubbling Under Charts”.

Mark’s struggle with alcohol which hampered his career both in the recording studio and in live performances and before long promoters were steering clear. 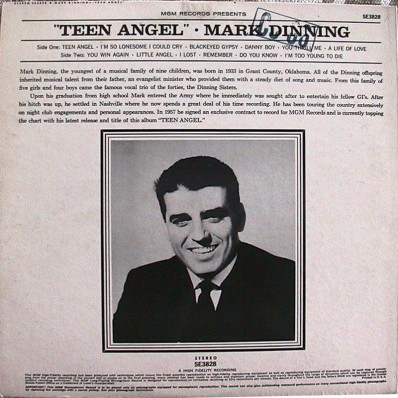