Seventeen year old Johnny Preston probably had no idea that fame awaited him when he was fronting his high school group “The Shades” were performing in Port Arthur, Texas.  But a local DJ saw “The Shades” perform and went to another Texas DJ who was into the music business beyond spinning records.

The jockey was Jape Richardson.  Jape (who referred to himself as “J. P.” had already had a good deal of chart success with his 1958 smash hit, “Chantilly Lace” – a novelty hit which reached the number 3 position in the nation.  “The Big Bopper” (his recording name) followed his big hit with “The Big Bopper’s Wedding” and “Little Red Riding Hood” a two-sided hit (#38 and #72) in late 1958.

J.P. liked the young lead singer from the Shades and in short order Preston auditioned – a session that did not go well due to a severe case of nerves.  Richardson didn’t give up, following the first session with another, this time offering a different kind of song, a track that Johnny was not overly impressed with, but agreed to try.

On and Off and On Again – a first

The resultant “Running Bear” was about to be released by Mercury Records, when Richardson was tragically killed in the most infamous rock air tragedy of perhaps all-time.  The label put the Preston release aside for a time, finally putting it out in late 1959.  On first pass the record quickly faltered and fell off the national charts.  Then in late November of 1959, the song re-entered Billboard’s Hot 100.  From there it established a first and a rare recording feat.  “Running Bear” streaked to the top of the charts reaching number one on January 18th, 1960 and remaining there for three weeks, becoming the very first record to fall off the charts – and then return for a number one run.

Richardson and Preston teamed up to co-write the flip side to “Running Bear” – “My Heart Knows”. 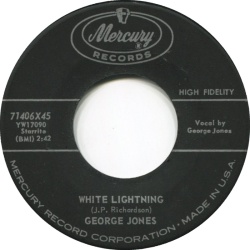 The Big Bopper was no stranger to the number one position, having penned “White Lightning” which George Jones took to the top of the Country Charts in the Spring of 1959.  It remained number one for five straight weeks for George and was in fact, his first number one country hit (11 more would follow).  “White Lightning also entered the Hot 100 for Jones, peaking at number 73.

Johnny Preston passed away in 2010, a victim of heart failure at the age of 71.