Merry Rock ‘n’ Roll! From Jazz to Skiffle to Rock!

Received a great present this Christmas for my birthday (yes – it is on the 25th) from my son – a great historical account of early jazz and it’s influence on the Brit brothers Ken and Bill Colyer and the resulting launch of what came to be known as “Skiffle” music.  The book is “Roots, Radicals and Rockers – How Skiffle Changed the World” by Billy Bragg just released in 2017.

Now there was a time when I probably thought that how in the world could one or two Skiffle songs change anything.  But now with my Bragg book in hand – I have had to reconsider.

The Colyers grew up in pre-WWII Great Britain and endured the German blitz of London with older brother Bill serving in the armed forces during the conflict.  Early on Bill developed a thirst to acquire all of the early jazz pressings which his meager earnings permitted, and beyond that, he developed a historians’ addiction to learn whatever he could uncover about the music form which was given birth in the U.S.

While away in the service, his younger brother Ken – against Bill’s strict warnings, became enthralled with the record collection – playing the precious disks, but providing them with the care and love that Bill would have to approve of when he returned and learned of Ken’s venture into the collection.

That was the beginning for Ken on an obsessed journey to not only hear the music, but learn the music, and find a way – any way to meet some of the Godfathers of the idiom coming out of the United States.  To shorten the story, and to not spoil the wonderful account in Bragg’s masterpiece, Ken found his way to the U.S. more specifically New Orleans where he sought out George Lewis and many of the early pioneers of what he considered to be the true jazz form – New Orleans Jazz.

His letters back home captivated older brother Bill, so much so that he started authoring extensive articles for Melody Maker magazine the leading publication in Great Britain covering jazz (as well as other genres).  Between Ken’s experiences in New Orleans and Bill’s faithful reporting, the brothers Colyer were thrust into the Great Britain jazz purist spotlight.  It didn’t hurt Ken’s reputation at all with those purists when he was jailed in America for “mixing with the coloreds” and eventually deported back to his homeland.

Backing Up a Bit – Rock’s Roots

Historians of Rock ‘n’ Roll always seem to grapple with isolating that moment in time when rock and roll was given birth.

Was it in 1951 down in Memphis when Sam Phillips cut a track with the Kings of Rhythm – a number composed by band member Jackie Brenston and arranged by leader Ike Turner called “Rocket 88”?  The recording would be released on the Chess label acquired from Phillips by the Leonard Chess – and attributed to “Jackie Brenston and His Delta Cats”.

In later years Ike Turner would disavow the “first rock record” citation declaring it a pure R&B composition.  The success of Rocket 88 led to a split between Brenston and Turner – with Jackie feeling that he had earned notoriety enough to front the Rhythm Kings.

Others would give a nod to a number composed in 1949 and released in 1950 out of New Orleans titled “The Fat Man”.  The writers were Dave Bartholomew and writer/musician Antoine “Fats” Domino.  And listening to the song not hard to imagine that this is indeed rock and roll.

Many would say hands down – Bill Haley’s “Rock Around the Clock”.  Haley and his Comets jumped on “Rocket 88” in 1951 recording it for the Holiday record label and were thus definitely on track to compete for the “first rocker” title.  Interestingly “Fractured”, “Rock the Joint”, and “Crazy Man Crazy” were all cut by the Comets before “Rock Around the Clock”.

References to “rock” or “rocking” go way back in time – well into the 1930’s and perhaps beyond. And by the 1940’s Billboard Magazine reviews were citing “rock and roll” descriptors for many tracks.  Looking over a list of candidates for the ‘first rock record’ it seems to me most of the very early nominations are definitely blues or R&B but perhaps we are splitting hairs.

Settling on a “first” rock record in the U.S. is probably a fun-filled but futile exercise.  Let the debate rage on.

But now turning attention back across the big pond to the land of many of our fore fathers, there was a “moment” in time which cannot be denied as a launching pad for so many great moments in rock and roll which were to follow.  Ken worked his way into several jazz combos in England but was usually not satisfied – not being able to locate other musicians who would refuse to compromise what Ken believed could only be the true jazz form.

He appreciated but was not taken in by the progression of jazz in the United States as it migrated to the Northern part of the country – specifically to Chicago and New York and evolved into swing, be bop and more fluid forms.  For both of the Colyer jazz – pure and simple.

So Ken eventually was able to join up with fellow travelers in Britain – talented musicians who were driven by Ken’s sense of purity. They were first led by a young trombone player, Chris Barber, who would contact Ken Colyer upon his banishment from America, offering him to take up the lead position in an upstart group that Barber was forming.

And so “Ken Colyer’s All-Stars” were given birth boasting a line-up which include Barber and Colyer along with clarinet player Monty Sunshine, Jim Bray on bass, Ron Bowden and a vivacious young banjo and guitar player named Tony Donegan.  By the time the group came together, young Tony had adapted the first name of one of his music idols, Lonnie Johnson.

Bragg tells how early on, Bill Colyer would accompany his brother’s groups, and during their musical set breaks, he would step in with his portable record machine and his record collection, and provide a recital playing the discs and narrating their history – all of which was very well received by the followers of the Colyer’s and company.  These intervals would come to be known as “breakdowns” and would so enough evolve into another pattern.

When the All-Stars were up and running, the breakdown sessions would continue but with a new twist.  Musicians from the All-Stars and sometimes from elsewhere, would step forward with their instruments and would offer up different forms of music straying away from the New Orleans style featured in their main sets.  During these breakdown sessions one could hear folksie, bluesy, numbers played in a rambunctious manner, creating a lively atmosphere of spontaneity among – not only the musicians, but with the audience as well.

On one of these occasions, the world of music would change forever.  It was May Day 1953 in the “London Jazz Club”.  The All-Stars were taking a break.  Up on the band stand five men assembled to take a go at a “breakdown”.  The five were Ken Colyer on guitar, Alex Korner on stand-up bass, Chris Barber also on guitar, Bill Colyer on the washboard and stepping up to the microphone with guitar in hand – Lonnie Donegan!

This was the moment that would change everything.  Here it is best described by Bragg’s account: “This picture embodies a revolutionary moment in British popular music, when the guitar, for so long stuck at the back of the bandstand, an often inaudible  part of the rhythm section, comes up to the front and takes control.”

A young Pete Townshend – still a schoolboy – would witness the event: “I was used to the tidy music of my dad’s era” he related to Bragg in 2008 during an interview.  Townshend continued, “It was messy.  He (Ken) was messy.  The band were messy.  The audience were messy.”

And Bragg interjects, “In scenes of seeming chaos  that would not have been out of place at a punk gig twenty-five years later, Townshend described how the men in the audience were drunk, they wore cheap duffel coats, some had wet themselves, and instead of wearing wrist watches, some had alarm clocks hanging around their necks.”

“What made a lasting impression on him (Townshend)  was the sight of the guitarist taking control of the gig by bringing the instrument to the front of the stage.  In that moment he grasped the enormity of what was happening.”

Townshend stated, “The instrument was going to change the world.”

Change the world it did.  Thousands of young Brits were to rally to the call, picking up broomsticks and washboards, cardboard boxes, and old wooden chair – any and all affordable implements for young lads low on funds, a banjo here a guitar there – emulating Lonnie and his mates who would soon emerged for the sake of Skiffle and Skiffle alone.

And from there it was just a skip and a hop to the formation of the beat music era – a movement derived directly from Skiffle, and one which would give rise to an assemblage of young lads out of Liverpool – John and Paul were in “The Quarrymen” in 1957, George was with “The Rebels” and Ringo started off skiffle first with “The Eddie Miles Band” evolving into “Eddie Clayton and the Clayton Squares”.

Bragg presents us with a two dramatic snapshots in time in his captivating narrative style.  The second occurred in Great Britain in July of 1954.  Decca Records was about to go out on a limb in their recording studio – Hugh Mendl open the doors to Decca’s “Studio 2”.  There, Lonnie Donegan would be joined by Chris Barber – who picked up a double bass and singer Beryl Bryden, who had been called in to the session, bringing alone her washboard.  They would cut four songs – not jazz this time, “Nobody’s Child”, Wabash Cannonball”, “John Henry” and the game changer, “Rock Island Line”. 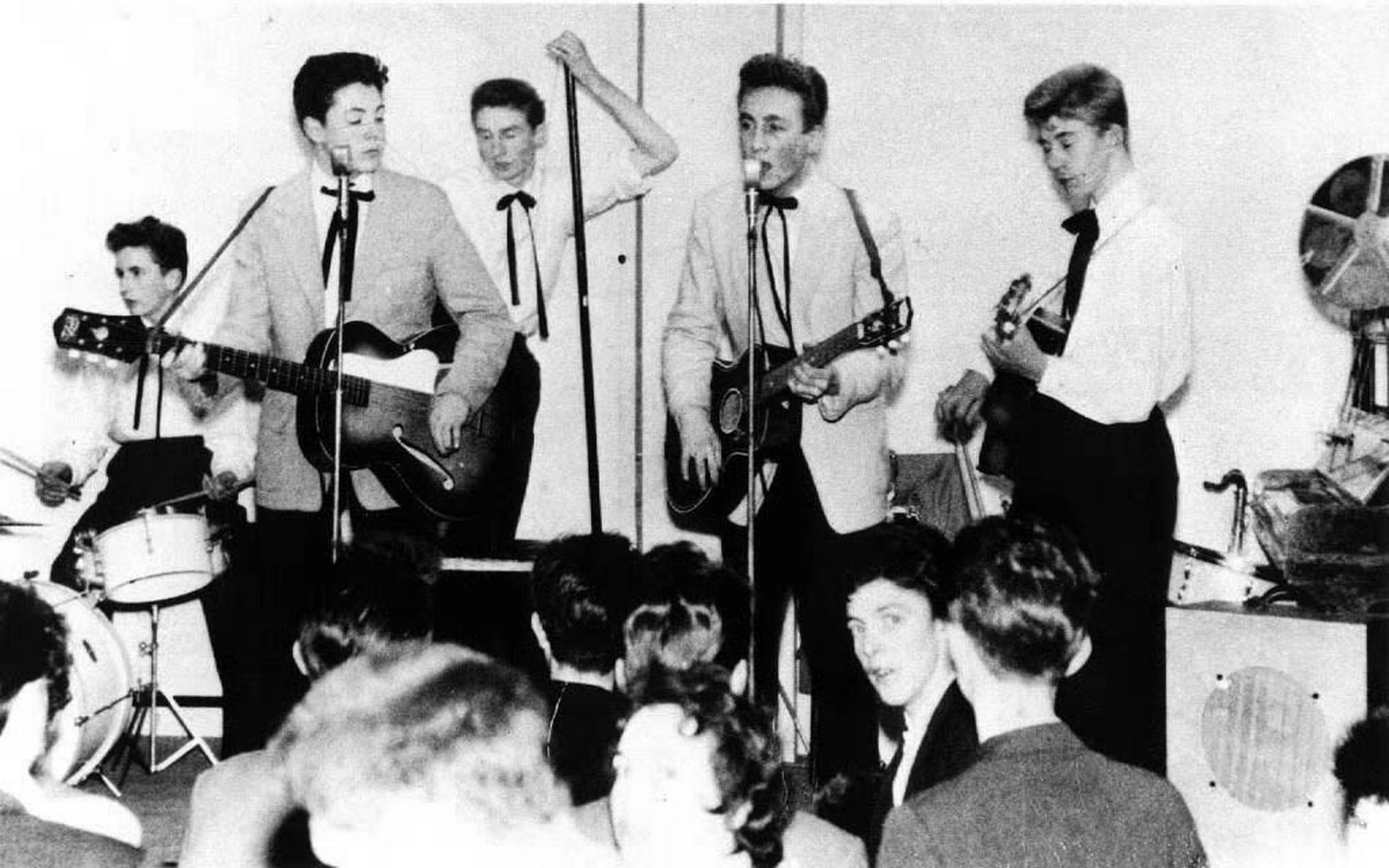 The Quarrymen – Moving From Skiffle to Rock

And just two week prior to the Decca session, another “moment” had taken place in the U.S.:  Bragg:  (The young trio of musicians) “were trying to cut a version of Ernest Tubb’s 1949 hit ‘I Love You Because’.  Half a dozen times they recorded the song, but the kid just couldn’t seem to convey the words.  Exasperated (the engineer) told the band to take a break.  While the rhythm section sucked on a couple of Cokes, the kid picked up his acoustic guitar and began goofing around on a blues song recorded some eight years earlier by Arthur ‘Big Boy’ Crudup.  Laughing at the incongruity of the moment, the bass player picked up his instrument and began playing in a similarly exaggerated style.  The guitarist put down his Coke and joined in.

“Hearing the spontaneous revelry (the engineer), who was busy in the control room, stuck his head round the door and said, ‘What are you doing?’

“Well, back up, (said the engineer) Try to find a place to start and do it again.  In a couple of takes, Elvis Presley, Scotty Moore and Bill Black recorded ‘That’s All Right’, and rock and roll was born.”

“‘That’s All Right’ and ‘Rock Island Line’ were the first tremors of an earthquake that would shake the world.”

After Skiffle opened the door, things were never again the same ….