How did he come up with a name like that?  Simple…. He was born with it.  Shelby Fredrick Wooley was born on April 10th, 1921 in Erick, Oklahoma.  Shelby (“Sheb”) started off playing in a group called “The Plainview Melody Boys” at a very young age – 15.  In his other job he was a rodeo cowboy

He got roughed up pretty good riding broncs and was unable to enlist in the military during WWII.  He next headed off to Oklahoma’s oil fields.   In 1946 he moved to Texas and began performing once again singing country music.  His next move was off to Hollywood – hoping to land work in the film industry.

Wooley landed many parts in film and was bad man Ben Miller in the famed “High Noon” in 1952.  He appeared in one episode of “The Lone Ranger” in 1953.  Lots of westerns followed – both motion pictures and television – “The Cisco Kid”, “The Adventures of Kit Carson”.

He appeared in another iconic film “Giant” in 1956 with the soon-to-be late James Dean, Elizabeth Taylor and Rock Hudson. 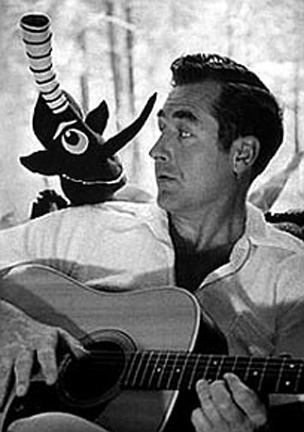 In the mid 1950’s Wooley landed a recording contract with MGM Records. His first recording was MGM K11717 “Panama Pete” b/w “Blue Guitar” released in March of 1954.  A long series of rather novelty oriented tracks would follow – setting up his recording destiny.  But it was not a quick road to recording fame. He had one very minor hit as Wooley in 1955 on the Hot 100 charts – “Are You Satisfied?” which peaked at number 95. He wouldn’t chart country until 1962.

Lots of misses and then in May of 1958 along came Wooley’s game changer.

“The Purple People Eater” entered the Hot 100 on June 2nd, 1958 and sky rocketed to number 1 where it remained for six weeks.  His big hit no doubt was inspired by Ross Bagdasarian Sr., who followed quickly in April with the very successful “Witch Doctor”.  That crazy ditty went to number one for three weeks. 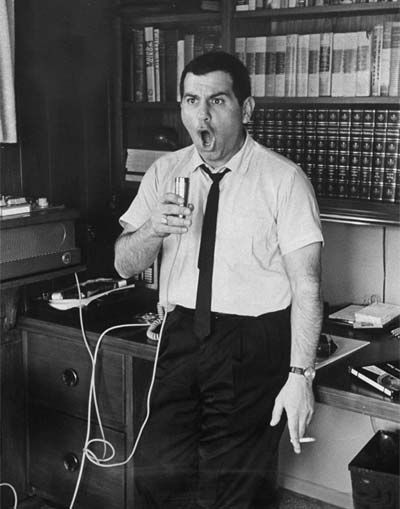 Performing with the Chipmunks as “David Seville” he would follow up that effort about eight months later with “The Chipmunk Song” – again hitting number 1 and remaining there for 4 weeks.  The Big Bopper (a Texas DJ) got into the act  with his marriage of both the Witch Doctor and the Purple People Eater. His zany tune was out zanied by the “A” side “Chantilly Lace” which charted at number 6 and would lead to his death just six months later while he was on that doomed flight with Buddy Holly and Ritchie Valens – The Bopper was only 28 years old. In late 1962 Sheb assumed a new recoding identity “Ben Colder” and recorded a parody “answer” song to Rex Allen’s “Don’t Go Near The Indians” – titled “Don’t Go Near The Eskimos” – This move firmly entrenched Wooley/Colder into the company of other Southerners Ray “Ahab The Arab” Stevens (Clarkdale, Georgia), and the “The Battle of Kookamonga” Homer and Jethro (real names Henry Haynes and Kenneth Burns) both out of Tennessee. 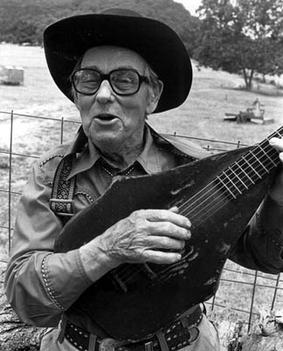 Homer and Jethro’s “Battle” was a stab at the tremendously successful hit “The Battle Of New Orleans” by Johnny Horton (#1 for six weeks in the Spring of 1959).  The writer of that epic was Jimmie Driftwood and the full title was “The Battle Of New Orleans (The Road To Chalamette)”.  His version charted number 24 on the Country Charts.  He also composed the song “Tennessee Stud”.  Driftwood would spend much of his life advocating for and working to improve the environment.  He died on July 12, 1998 at age 91.

Stevens recorded about two dozen wacky tracks before “Ahab” landed at number 5 in 1962.  He would hit number 1 twice with the not silly “Everything is Beautiful” in 1970 (two weeks) and with the times-trendy “The Streak” in 1974.

Texan Jessie Lee Turner took at shot at the freaky voiced character with his “Little Space Girl” in January of 1959 and managed a respectable number 20 showing.

There was always room for some pretty goofy tunes along the way – We probably could use a little bit of goofiness in these times..