The Space Race (on record)

The Soviet Union launched Sputnik 1 on October 4th, 1957 – The small craft successfully orbited the Earth for about three weeks before it’s batteries gave out.

The U.S. was shocked and so we entered into the new era of the “Space Race”.

Actually the United States was the first to announce that a ‘launch’ was eminent telling the world this message in the Summer of 1955.  When the Soviets heard this they kicked it into high gear and beat the U.S. to the punch – but it would take two additional years to accomplish.

If you were around after this launch you probably joined your neighbors heading out into the front or back yard at night to catch a glimpse of Sputnik I traversing the horizon.

The Soviets not only beat us to the punch with Sputnik but also sent the first human to space – Yuri Gagarin in April of 1961.  They followed that up by putting the first woman into space – Valentina Tereshkova – on June 16th, 1963.

The U.S. entry into this race did not begin well.  “Vanguard TV-3” was launched on December 6th, 1957.  Just seconds after it’s launch it exploded earning the title of “Flopnik”.

Then a few months later the satellite “Explorer 1” successfully penetrated space – weighing a whopping 18 and half pounds – on January 31st, 1958.

“Sputnik 2” was launched on November 3rd, 1957.  There were a total of five actual “Sputniks” but Americans would lump many future Soviet vessels as “Sputniks”.

The famous “Telstar” satellite was launched on July 10th, 1962 and became known for transmitting TV pictures, telephone calls and much more.  A year later Telstar 2 was launched.

Telstar 1 – Still Crazy After All These Years

And today, if you have the right equipment, you can still head out into the yard to view both Telstar 1 and 2 – neither no longer transmitting but both chugging along!

Sputnik I and II both eventually fell from the friendly skies.

The very first non-human space travelers were fruit flies who were launched in early 1947 by the U.S. in a V-2 rocket.  The capsule returned to earth successfully and the flies were found alive.

Monkeys had a much more difficult time with the space program – The first monkey – “Albert” was launched in a rocket in the Summer of 1948 passing away during the flight from suffocation.  “Albert II completed a successful flight but would perish on return flight impact when his parachute failed.

Alberts III and IV also perished in flight.  Two thirds of all space bound monkeys perished either in space or back on earth as a result of the effects of space travel.  Mice were rocketed into space – the first nameless mouse in August of 1950 – He too perished due to a failed parachute.

The Russian dog Laika became the first animal to orbit the earth and was the first dog to take the ride.  She was launched on November 3rd, 1957.  Little Laika was a stray dog who was found wandering the streets of Moscow before she was tapped for fame.

But fame was fleeting as poor Laika died a few hours after launch – something the world did not learn about until the year 2000.  Since that time the Russians decided to memorialize Laika (real name “Kudryavka”) with a monument.  Many dogs would follow in the Soviet Union – all the way up to the launch of Russia’s first cosmonaut.

Two monkeys – Able and Baker were the first monkeys to survive space travel after their 1959 flight both traveling together.  Able was from Independence, Kansas and Baker was from Peru.

In late 1960 three more mice made the trip – Sally, Amy and Moe – They not only survived, they did quite well after returning.

Americans are most familiar with the chimpanzee “Ham” who went into space on January 31st of 1961.  He was endangered when his capsule suddenly lost pressure but his little space suit saved him.

His 16 minute flight did result in a bruised nose but Ham would live on – passing away in 1983 at the assumed age of 26!  Ham had a definite purpose on his trip.  He was trained to pull levers and turn gizmos to demonstrate performing tasks while in space travel.  Ham would be followed soon when Alan Shepard became the first American to enter outer space.

The first chimp to orbit the earth successfully was Enos who made the trip on November 29th, 1961. 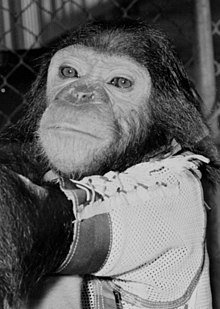 Little Enos – He Be Spinnin’ Around (the Earth)

After that it seemed that humans just couldn’t send enough animals to space – with the U.S., Soviet Union, France and China all competing.

And who were the first animals to orbit the Moon were – who would have thought – two tortoises sent by the Soviet Union.  And then there were “Fe, Fi, Fo, Fum and Phooey” – five mice who circled the Moon a record 75 times while their human travel companions – astronauts of Apollo 17, became the last humans to walk on the moon

Well, this just goes on and on of course… but we digress…  I just wish that the little animals had not perished….

The following discography includes records by musicians with references to Satellites, Spaceships, Rockets and more in their titles.  I attempted to list groups by the name of “The Satellites” who are not the same group) Carlo Mastrangelo was a member of Dion and the Belmonts