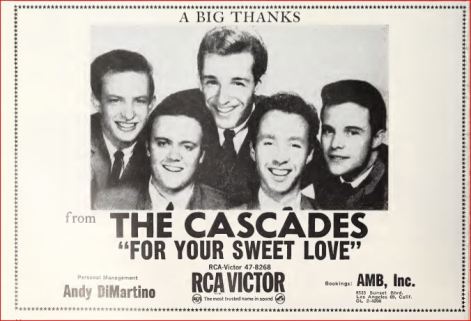 By the time this late December, 1963 advertisement ran in Cash Box Magazine, the Cascades moment in the spotlight had come and gone.

Just 11 months earlier the group broke onto the music pop scene with “Rhythm of the Rain” a huge hit – peaking at number 3 and becoming an eternal oldies classic.

The Cascades started off back in 1960 – all members of the United States Navy and all stationed in San Diego assigned to what was known as a “repair” ship – the “USS Jason”.  Their chosen group name in the Service was “The Silver Strands”.  Upon their discharge the group changed their name to “The Thundernotes”.  The group’s lineup at that time included John Gummoe, Art Eastlick, Lenny Green, Dave Stevens and Dave Wilson.

The group recorded one single on the Donna label – owned by Del Fi Records’ Bob Keane – titled “Thunder Rhythm” b/w “Pay Day”.  This single is listed as being released on Donna 1343 in May of 1961 but I have not been able to find a copy anywhere.  I suspect that the release may not have seen the light of day.  “Thunder Rhythm” was actually a surf oriented instrumental – the group being very much influenced by the Southern California surf bands and in particular they were captivated by the vocal harmonies of The Beach Boys.

Their next stop was to sign a contract with Valiant Records – quickly changing their name to The Cascades, and moving ahead with a revamped lineup.  With Valiant, they proceeded with the lineup of Gummoe, Stevens, Wilson now joined by Eddie Snyder and Dave Zabo.

Their first Valiant release was titled “There’s a Reason” a song I have always enjoyed, backed up “Second Chance” in June of 1962.  Gummoe penned the “A” side and Valiant Record owner Barry DeVorzon co-wrote the flip.  The song failed to dent the Hot 100 although it did obtain considerable local air-play in Southern California especially around their home base in San Diego.  Gummoe’s second effort “Rhythm of the Rain” had the right stuff rocketing the group into the national spotlight shooting all the way to the top of the Billboard Charts. The Cascades would place four additional tracks on the Hot 100 charts – with “The Last Leaf” and the flip side “Shy Girl” both charting – numbers 60 and 91.

The Cascades appeared in a 1967 “Beach Movie” titled “Catalina Caper” along with Little Richard and Carol Connors – Carol being one of the original Teddy Bears along with Phil Spector and Marshall Leib.

The Cascades elected to move on in the Summer of 1963 signing on with RCA Victor where they recorded eight tracks – with only one “For Your Sweet Love” (ad shown above) making it onto the Hot 100 at meager number 86.  The group toured and tried to keep it together.  John Gummoe departed in 1967 and was replaced by Gabe Lapano.  Tony Grasso came on board – and only Owens and Snyder remained with the two new additions.  Gummoe recorded a few records on his own and several of his songs were recorded by other artists such as Kentucky Express, Jacky Ward, The Flanagans, Randy James and Sarah Brightman to name a few.  Eddie Snyder took a shot at country music – very briefly – recording as Eddie Preston.

Their final charting single was “Maybe the Rain Will Fall” released in the Summer of 1969 on Uni Records – Charting at number 61.  Earlier, while recording for Arwin Records, they cut two tracks penned by Colorado’s Bob Lind of “Elusive Butterfly” fame – “Cheryl’s Goin’ Home” and Truly Julie’s Blues”.  Lind released “Truly Julie’s Blues” in April of 1966 denting the charts at number 65.

The group  released singles on Charter, Liberty, Arwin, Smash, Probe, Uni, and London before finally calling it quits in 1975.  As is the usual, the Cascades reformed for oldies performances once in 1995 and then for a final time in 2004.