Who knows from where Jerry Leiber and Mike Stoller drew their first inspiration for leading the Coasters into the world of novelty numbers?

But perhaps it came in 1956 when a Los Angeles-based R&B group released a ditty titled “Stranded In the Jungle”.  The Cadets, like so many other combos, emerged from Gospel music as the “Santa Monica Soul Seekers” way back in the late 1940’s.  The Seekers would begin their recording career inadvertently as “The Jacks”.  This came about when they were embarking on their recording career after signing on with Modern Records in L.A.

The original Cadets included Austin Taylor, Will Jones, Aaron Collins, Glendon Kingsby and Willie Davis.  Taylor started off with the “Mighty Clouds Of Joy in 1952 before joining the Cadets.  Will “Dub” Jones would find his fame as a member of The Coasters which would provide him with a entry into the Rock and Roll Hall of Fame.

A bunch of singles would be released after these first two – with the group being alternated between RPM/The Jacks and Modern/The Cadets.  There were six in all.  None made it onto the national charts.  Then in the summer of 1956 the group switched to a different producer and they cut a song which had previously been recorded by the Jayhawks called “Stranded In The Jungle”.  The song was written by James Johnson and Ernestine Smith.

A Tangled Web We Weave with Novelty Groups: Jayhawks – Vibrations and Marathons

The Jacks version of “Stranded in the Jungle” would climb to number 18 on the Hot 100 charts and would go to number 9 R&B.  The Cadets version would clip the Jayhawks version slightly going to number 15 Hot 100 and top out at number 4 R&B.

The Jay Hawks, like the Cadets, played the name game.  The group came together in 1956.  They would later become the “Vibrations” in early 1960 and would continue to release occasional novelty numbers.  To keep things interesting, while they were still recording as the Vibrations the group would release another novelty “Peanut Butter”. “Peanut Butter” apparently was slated to be recorded by the Arvee label as a follow up to successes by their premier act “The Olympics”.  The problem was the Olympics were out on the road touring.  Arvee became very impatient and so arranged for the Vibrations to cut the record but under a different name: “The Marathons”.

Now the Vibrations were contracted to Chess Records and so the song landed on Chess 1790 backed with “Down In New Orleans”.  Chess management was not pleased with the deception and thus attempted to halt the release of the Arvee single featuring their Vibrations.  Arvee was still impatient for the next “hit” and quickly assembled a group of unknowns releasing it on Arvee 5027 again using the name “The Marathons”.  Chess would counter by quickly releasing yet a third record featuring “Peanut Butter” this time on the Chess subsidiary Argo!

Left: The Olympics – Right: The Marathons

The substitute Marathons in actuality were Bobby Maccagnanno, James Hall, Freddy Sachel and Art Wheeler.  They were used on most future “Marathon” records with a few exceptions where writer/singers H.B. Barnum and Martin Cooper did the singing as a duet but identified as “The Marathons.  Martin Cooper was James Martin Cooper who was born in Colorado and was the composer of many songs including doing a stint with Lee Hazelwood in a group called “The Shacklefords” and co-writing Stevie Wonder’s “Hey Harmonica Man”.

But Cooper was always prone to lean toward the comedic tunes or oddities to say the least.

The Arvee release would prevail on the charts going to number 20 Hot 100 and number 25 R&B.  So based on this success, Arvee continued to record songs by “The Marathons” which on all subsequent releases – were not The Vibrations.

But it doesn’t end there – We were to learn later on that – Yikes! – some members of the Vibrations had actually started off as members of the – yep – The Jay Hawks/Cadets!!! 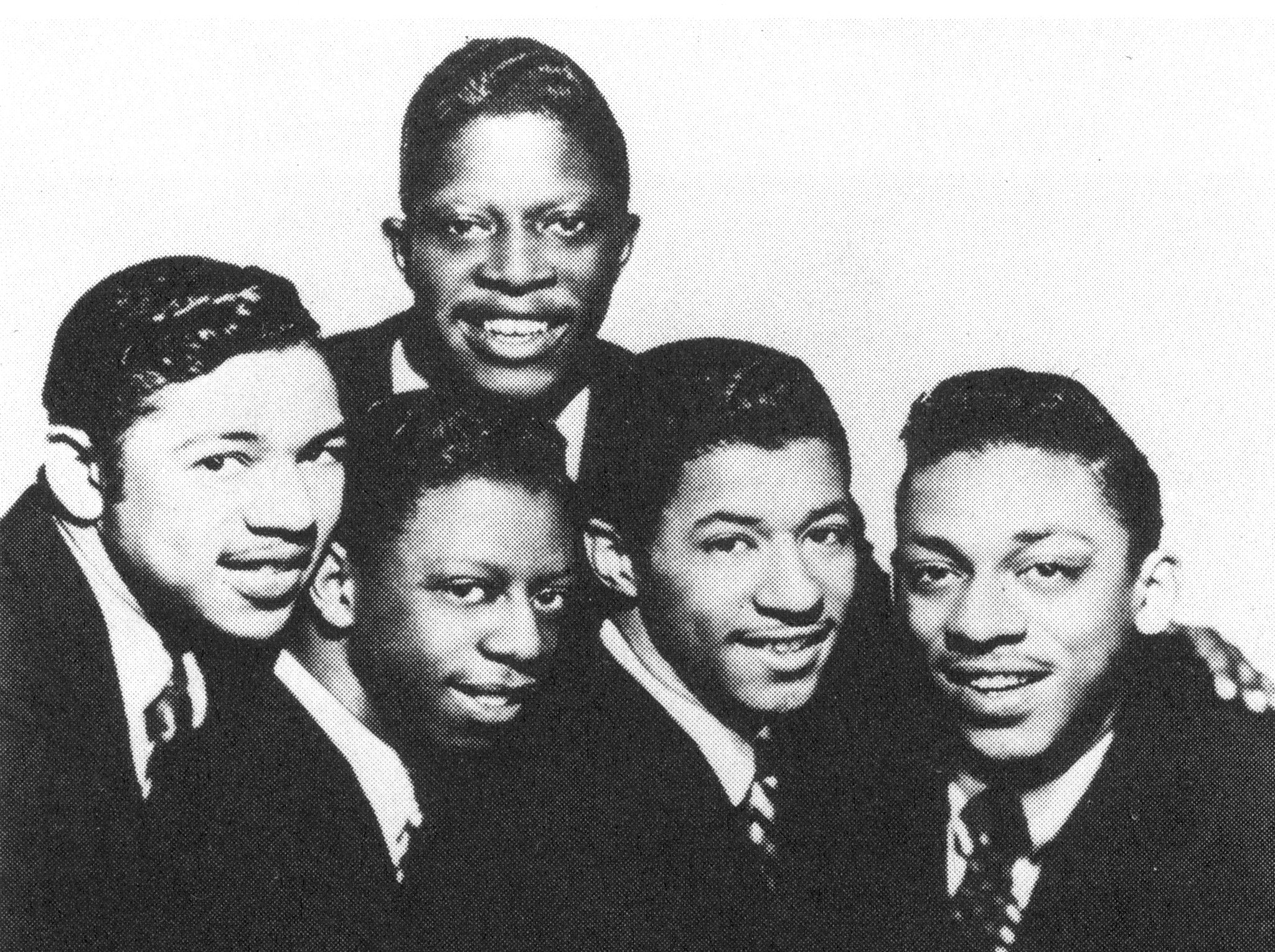 The Cadillacs formed in 1953 in Harlem, New York taking the name the Carnations.  Within a year they had become the Cadillacs with Earl Carroll, Gus Willingham, Lavern Drake, James Clark and Bobby Phillips.  The Cadillacs would make their first national Hot 100 appearance with “Speedo” in 1958 which hit number 17.  A few months later they would introduce their novelty classic “Peek-A-Boo” which had Coasters written all over it.

Those two songs would be their only charting singles on the Hot 100.  Along the way they would attempt a couple of more novelty tracks.  The Cadillacs broke up in 1963 and reformed in 1970.  They were pretty much finished as a group by late 1970’s with more than 20 members moving through the ranks. So why all of this was going on, the group which would come in second in doo-wop novelty only to the Coasters, would be the Olympics.

The Olympics formed in 1956 in Los Angeles with Eddie Lewis, Walter Ward, Charles Fizer  and Melvin King all but Lewis being classmates in high school.  They began recording life as “The Challengers” releasing one serious single on that label in 1956.  After a year-and-a-half the group would move over to the Demon record label and would immediately jump on the novelty band-wagon with “Western Movies” in June of 1956.

They would cut three singles for Demon with two charting.  Then they would move on to Arvee where all hell would break loose as narrated above.  They would chart six times for Arvee – all novelties – and of course there were several releases that didn’t go anywhere.  Another label switch was in store in 1963 – Tri Disc – This would provide them with two additional charting records.

The Olympics wound up their charting days on the Mirwood record label, neither of those being a novelty – not that they didn’t try their hand at novelties right up until the end.

The Olympics would continue on as a recording act with several personnel changes up into the mid 1970’s.

Huey Smith and the Clowns

As their name would imply, Huey Smith and the Clowns were always up to deliver a comic R&B performance as their two classic compositions would attest “Rocking Pneumonia And The Boogie Woogie Flu” and fun rocking “Don’t You Just Know It” from 1957/1958.

Huey Smith was born Huey Pierce Smith in 1934 in the musical hotbed town of New Orleans, Louisiana.  As a teenager Smith would partner up with Eddie Jones who would gain fame as “Guitar Slim”.  Smith’s first regular gig was to become a member of Little Richard’s backing band.  This would lead to Huey working with Lloyd Price and Smiley Lewis to name two.

By 1957 Smith was ready to head up his own band and so he and Bobby Marchan would form “The Clowns” with Smith leading the group and Marchan taking on lead vocals.  (Marchan would later record solo and scored a number 1 R&B hit in 1960 titled “There’s Something On Your Mind Part 2”).

Other “Clowns” included John Williams who went on to join the Tick Tocks, Edward Buck who was known as “Little Buck” and Curley Moore.   Both Moore and Buck recorded several singles as solo artists.  Buck would record in the early 1960’s on the Duke record label and then in the late ’60’s on Seven B. Smith, who is alive today as of November 30th, 2019, returned several times over the years with bands of various names including the “Pitter Pats”, the “Hueys”, “Shindig Smith and the Soul Shakers”.  In the way of recognition, Smith was honored by the “Rhythm and Blues Foundation” in 2000. The Rivingtons began as The Sharps.  The group would find work providing ‘Rebel yells’ on some of Duane Eddy’s recordings – great work if you can get it!  In 1961 they would record as the Crenshaws before moving on to Liberty Records.

A garage group out of Minnesota would revive the Rivingtons contributions by mixing in crazy sounds from “The Bird’s The Word” with “Papa-Oom-Mow-Mow” into the driving and wacky “Surfin’ Bird” in 1964 – a song which went to number 4 on the Hot 100.

Initially, the Rivingtons received no credit on the Trashmen’s song – The Rivingtons pressed them and so credits were added and royalties were shared. The Clovers never intended to enter any R&B Novelty Battle of the Bands – but they did manage a few along the way – one a classic! The Clovers go way back – vintage R&B group among the fine pioneers of R&B.  They came together in 1946 while still attending high school in Washington D.C. taking the name “The Four Clovers”.

Suffice it to say there were many, many personnel changes during the time of their recording and performing.  Their first recording would come in 1951 when they were signed to the Atlantic record label – “Don’t You Know I Love You” b/w “Skylark”.  The “A” side would go to number 1 on the R&B Charts and they would follow it a few months later with a monster R&B hit “Fool, Fool, Fool” which went number one and remained there for six straight weeks.  Neither song dented the Hot 100 Charts.

In fact, the Clovers would not make an appearance on the Hot 100 until their “Love, Love, Love” managed to chart in 1956 coming in at number 30.

The Clovers will be best remembered by the pop crowd for their 1959 single “Love Potion No. 9”  which managed a number 23 showing on both the R&B and Hot 100 charts.  Love Potion was penned by the composing sensations Jerry Leiber and Mike Stoller. Clarence was born Clarence Henry II in 1937 in New Orleans, Louisiana.  Henry’s early influences were Professor Longhair and Fats Domino – two New Orleans’ giants.  In 1964 Clarence had the honor of touring with and opening for the Beatles on their first tour of North America. 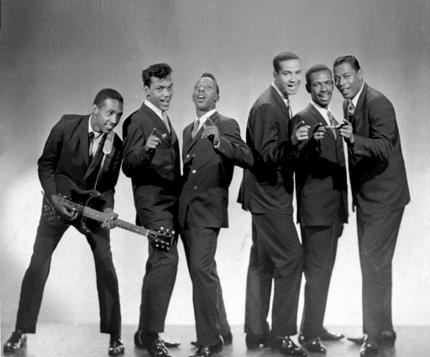 The Contours were Motown’s vivacious – electrifying on-stage performers.  When the Temptations first performed coming on after the Contours – they were very disheartened and vowed they wouldn’t perform live again until they learned how to dance.

“Do You Love Me” set itself apart from other Motown classics – a song which never failed to fill the floor at sock hops across the nation!.  The song would go to number 1 R&B for three weeks and number 3 Hot 100 in 1962.

The Contours came out of Detroit, Michigan like all good Motown artists.  They were first called “The Blenders” before becoming the Contours.  “Do You Love Me” was given to the Contours but almost taken away when they stumbled through the first rehearsals.  The song was going to be handed over to the Temptations but the Contours quickly recovered and we had the drivin’ smash that we know today!

The Contours lead voice was Dennis Edwards who would move over to the Temptations in 1967 to replace David Ruffin. More than two dozen musicians passed through the Contours ranks over the years. The Monitors were a minor Motown act – relegated to the VIP subsidiary label – They formed in 1964, and found a small amount of fame when they recorded a song first recorded by the Valadiers – “Greetings (This Is Uncle Sam).

The Do Wop Novelty Discography (in the style of The Coasters)

This LP features tracks by The Olympics, The Marathons (actually the Olympics not the substitute group) and rather strangely one track by “The Robins)