This group of youngsters came out of Woburn, Massachusetts forming in 1955 with brother and sister Margo Sylvia, and Gilbert Lopez – brother and sister vocal jazz duo.  In 1956 they were joined by Margo’s husband John along with her cousin Charlotte Davis and the foursome was complete.

Initially they were called “The Tone Weavers”.  During an appearance they were introduced as the “Tune Weavers” – and that was that going forward.

Margo and Gil penned a song “Happy, Happy Birthday Baby” way back in 1952.  The song came to the attention of Casa Grande record label owner Frank Paul – who cut the record with the foursome.  Not much happened at first until Philadelphia DJ’s began to spin the record.

It caught Dick Clark’s attention and he played it on American Bandstand – In short order it was picked up by the Chess brothers and released on their subsidiary Checker label.  The song took off reaching number five on the pop charts and number five on the R&B charts in the Fall of 1957.

All of the members were in their very early 20’s when the record hit.

More records would follow on Casa Grande as well as Checker but the magic of Margo’s lead voice along with a mournful and plaintive background by the others would not carry over to their other recordings.  “Happy, Happy Birthday Baby” was a ‘one-hit wonder’ shot for the group.

They hung in there for 4 more years performing with some of the giants of rock and roll including Buddy Holly, Eddie Cochran, Jerry Lee Lewis  and the Everly Brothers performing as part of Alan Freed’s rock ‘n roll show in New York.  In 1960 Charlotte departed to be replaced by William Morris, Jr.  They managed to keep going until 1964 before calling it quits. 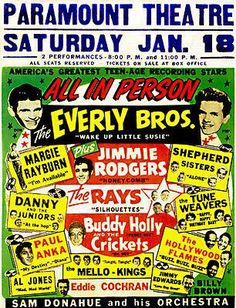 Both Margo and her brother Gilbert have since passed away.  Charlotte teamed up with John Sylvia to keep the act going in the late 1990’s.

Appropriately enough, The Tune Weavers were inducted into the Doo Wop Hall of Fame in 2003.