It was always pretty obvious that neither Penny Starr or Van Trevor ever entered the Band Box recording studios or for that matter, ever performed in The Mile High City.  It is known that Band Box owner Vicky Morosan traveled far-and-wide to not only promote Band Box releases but to seek talent for her label whether they recorded at her studio or from afar.

Vicky Morosan Rocks Around the Clock!

Composer/artist James Myers (aka James “DeKnight”)  was most likely in close contact with Vicky, having not only released one single on Band Box, but also steering East Coast talent onto the label – if only briefly.  DeKnight recorded “Rock-A-Billy and “Whistlin’ Willie” released on Band Box single 281.  DeKnight was famous for at least co-authoring the monstrous hit for Bill Haley and the Comets, “Rock-Around-The Clock” one of the biggest selling singles in the history of rock ‘n’ roll.

Joe Valino of “Garden of Eden” fame recorded “Turn Back the Dawn” and “Now” for Band Box (261) again as part of Myers Music.  Bobby’s Band Box single (322) contained a song co-written by Myers “The Rug Merchant” b/w “Wanted” with both tracks licensed to Meyers Music, Inc.

So last week I received the following comment from Rikk: ”

“My Name is Rikk Anderson and I played Drums for Van back in 1967. We were on tour with Johnny Dollar, Penny Starr (DeHaven) the tour was called Country Time Review. Van was always kind to me. And I’ll never forget him. Great memories!”

Rikk answered that he worked with both Van and Penny from 1967 through 1974 as well as Nat Stuckey.  And further, Rikk is almost certain that the tracks were cut in Nashville produced by Dick Heard.  Heard composed songs for many country artists including George Morgan, Tommy Cash and Mel Street, and he co-wrote “Kentucky Rain” for Elvis Presley, which charted at number 16 on the Billboard Charts.  He also co-wrote “Tears and Roses” for Al Martino a number 20 single in 1964.

Dick Heard’s Biggie for “The King”

This lines up well with the Band Box recordings for both Starr and Trevor (Starr would become Penny Dehaven), and Dollar as well who was cited on Band Box release 373 which included holiday public service announcements (safety topics) from all three artists and was credited to the “Dick Heard Artist Management Co.”

Dikk “In 1967 we did a long New England and Canada tour (Country Time Review) with Rod Harris comedian who worked with the Roger Miller TV show.”

This was received from Colorado music history Blogger Lisa Wheeler from a February 26th, 1966 issue of Cashbox Magazine: (Not sure just how much of a “major build-up” actually occurred or “intense promotional and advertising program” came to be since Band Box had limited fiscal resources – but the referenced single did chart for Van Trevor and got his country career off to a good start.

This fits in well with Van Trevor as he was a New England native born Robert Frances Boulanger in Lewiston, Maine.

Heard produced all the Band Box releases and co-wrote some of the tracks with Van.  And he was the producer for Penny Starr’s “A Grain of Salt” and “A Thing of Pleasure” tracks (co-writer on “Grain”) on Band Box 372 in early January of 1967.

DeHaven charted country 17 times – her biggest hit being “Land Mark Tavern” #20 in 1970 recorded with Del Reeves.  Van Trevor managed eight chart records country with his Band Box “Born to Be In Love With You” his biggest hit – #22.  Johnny Dollar managed eight chart singles as well with “Stop the Start (Of Tears In My Heart)” being his best outing – #15 in 1966.  Dollar went on to produce other artists

A Van Trevor Side Note – Bob Crewe and The Four Seasons

In looking around a bit more on the topic of Van Trevor I was looking over his time spent with a group called “The Saturday Nights (sometimes spelled “Knights”).  He co-composed with other members of the group.  They became involved for a time with Bob Crewe when they were backing Freddy Cannon on some of his recordings an in live performances.

During that time Crewe and Trevor (composing as Boulanger) co-wrote “That’s The Only Way” for the Four Seasons which was the B side of “New Mexican Rose” (1961).  The song charted for six weeks in 1963 reaching number 88 on the Billboard Hot 100.

The Saturday Nights involvement with Bob Crewe and Freddy Cannon would explain how they came to record on the Swan label. 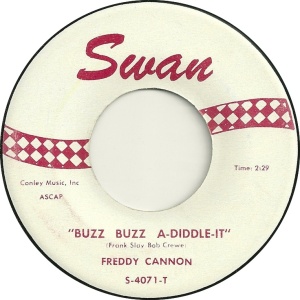